Less than a fifth of farmers plan on fully retiring and many do not discuss their later life plans with loved ones, according to a new study from the University of Exeter in collaboration with NFU Mutual.

Nearly 700 farms across England, Scotland and Northern Ireland took part in the extensive university research, and the findings highlighted the unique approach farmers take to retirement.

Handing down the farm can often be an extremely emotional time for those farmers who have worked hard on the land or with livestock their whole lives, with many clinging on to ownership and “the way of life” long after traditional retirement age.

Children often find it hard to approach the subject of taking over, and many are not given the keys until they themselves are middle aged or older.

“Farming is a way of life, and it’s an identity,” he said. “Facing up to the reality of stepping back and being no longer in charge tends to put people off. It’s all a bit daunting; thinking about handing over management of the business – it reminds people they’re getting old.

“There is much greater awareness of succession as an issue facing UK agriculture than there was 10 to 15 years ago, but there is still a very pronounced need to move beyond the awareness stage to actually encourage planning. That struck me as something the industry desperately needs to address.”

Other key findings from the research 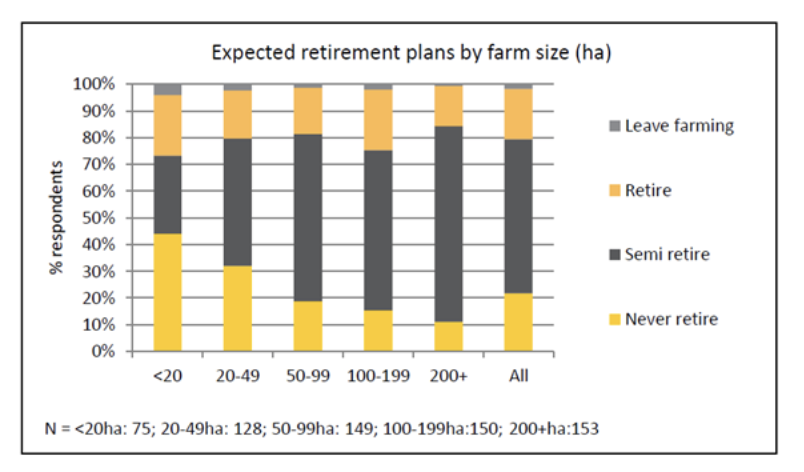 Whether they plan to fully retire or not, the survey found that 43% of farmers are planning to use income from their farm in later life. NFU Mutual commissioned the study, and their financial advisers are experts at helping farmers plan their financial futures.

Sean McCann, Chartered Financial Planner at NFU Mutual, said: “Handing on the farm doesn’t have to mean giving away the ownership of all the assets on day one. It can be helpful to think about the management of the business and ownership of the farm as separate issues.

“The farmer could look to hand over more of the day to day management of the business while retaining the ownership of the assets to a later date. One option favoured by a lot of farming families is to set up a partnership – which can give the younger generation a stake in the business.” 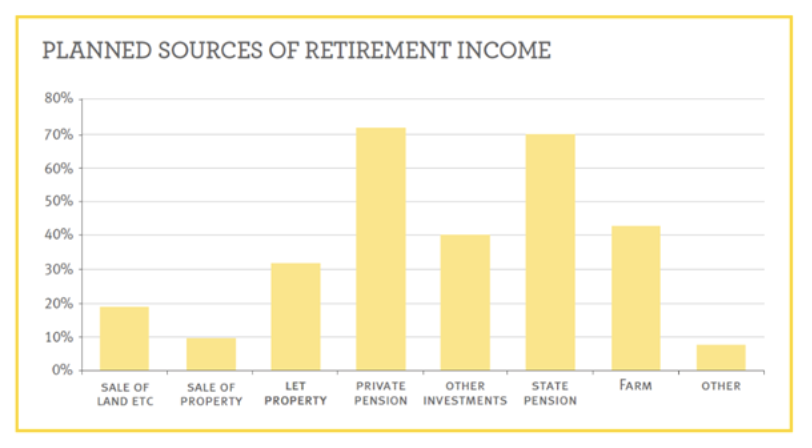 Less than half of farmers have identified a successor for their farm even though they have a successor who could theoretically take over the reins.

Professor Lobley said: “There wasn’t a lot of evidence that farmers were delegating or sharing decision making, and that’s an important part of the process.

“Farmers hang on to the cheque-book into their 70s and you meet farmers in their 50s who have never signed a cheque before. You have to gradually share decision making, so when the successor finally gets to run the farm as a business, they’re not thrown into the deep end.

“I try to tell farmers you can get rid of those parts of the job you don’t like, such as paperwork, or getting up at 4am for milking and stay involved in the things you do like.”

Only around half (50.7%) of respondents with children have identified a potential successor.

Professor Lobley said: “This may be indicative of a reluctance among the younger generation to pursue farming as a career – or indeed discouragement from their parents to do so.”

Financial considerations when handing over the farm

There are a number of tax issues to consider when handing over the farm, including Inheritance Tax and Capital Gains Tax.

Sean McCann, Chartered Financial Planner at NFU Mutual, said: “Regardless of when you are planning to hand the farm on, the aim should be to do it without paying more tax than you need to.

“The good news is there are some generous tax breaks available to help you pass it on, whether that’s during your lifetime or on death.

“Agricultural and Business Property relief can help you pass on your farm free of Inheritance tax, but there are a few traps to look out for: particularly where farms have diversified, or where there’s development potential.

“If you’re planning to hand on assets during your lifetime, one of the taxes you need to be aware of is Capital Gains Tax. A lot of people don’t realise that you can pay CGT when you make a gift. There are some tax breaks available to help you defer the tax, so getting the right advice is vital.”

Presence of a Will

“It’s really important that all members of the family involved in the business have valid wills – I’m sure we’ve all heard stories of farmers dying without a will, leading to conflict in the family that often ends with the ‘For Sale’ board going up.

“If you farm as a partnership or a company you also need the right agreements in place, together with your will, these make sure the ownership of the business ends up in the right hands at the right time.

“Unexpected events can happen to any family, making sure that the business could continue to function should be a priority. Having a Power of Attorney is vital – it allows someone you appoint to ‘Step into your shoes’ and make decisions on your behalf if you’re unable to.

“It’s also important that the right income protection and life insurance is in place, so that if an unexpected illness or tragedy did strike that the family and the business are protected.”

Just 10% of farmers plan to do nothing on the farm post-retirement age, with almost half planning on continuing the same jobs but less intensely.

What does the future hold? Innovation needed with Brexit looming

In light of his research, Professor Lobley believes technological innovation in agriculture is key to enticing the next generation of farmers to the industry and could help deal with the shift in payment schemes following the UK’s exit from the European Union.

He said: “Given all the challenges facing UK agriculture, we need that next generation of business leaders coming through.

“Once the basic payments are removed entirely and it becomes clear ELMs (Environmental Land Management scheme) is totally different, a lot of farmers will be forced to really think about the future of their business.

“The future is going to be very different but that technological change can help speed up the transfer between the generations.

“I’ve talked to farmers who have gone over to totally robotic milking parlours and their successors are interested in that side of things, working with computers and software systems.

“Technological advances have helped attract people who hadn’t previously thought about working on the farm.”

NFU Mutual has produced a special edition of its Ahead of the Field podcast on Succession Planning, available here.

New rules and logos to protect British food and drink

Creating your own farm shop: A simple, cost-effective solution

Giving back to the agricultural community

Is selling online the way forward?

Diversifying your farm in a pandemic

New rules and logos to protect British food and drink

Creating your own farm shop: A simple, cost-effective solution

Giving back to the agricultural community

Is selling online the way forward?

Diversifying your farm in a pandemic

A new brand with women farmers at its heart