Mid-June and many of Sam Patchett’s crops have caught-up remarkably well from the late, decidedly unpromising spring. 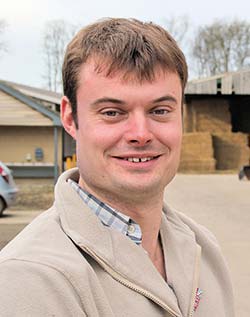 It never ceases to amaze me how well crops can catch-up given half a chance and the right nutritional support. We’re unlikely to be setting any performance records this season. But after the spring we’ve endured, it’s quite remarkable how many of our crops are going into July in reasonable shape; especially as it’s been a struggle to keep our fieldwork up with the unbelievable speed of early summer crop development.

While spring barleys going into poorer conditions haven’t fared so well, those drilled into warm, moist seedbeds at the very end of April were at flag leaf in less than six weeks, having come from GS31 in barely a week. Little rain since drilling has really highlighted the value of both seedbed nitrogen and determined moisture preservation here.

Prioritising an early PGR and both manganese and Nutriphyte PGA at 2–3 leaves has paid dividends in rooting and tillering too. As has an early insecticide in countering the serious BYDV threat with so many aphids about in the May warmth. It’s been all about giving crops everything they need to allow them to make-up for lost ground.

The dryness hasn’t helped our very late-drilled spring beans, so we’re thankful our acreage is much less than it has been historically. The linseed that’s gone in instead wasn’t drilled until the start of May. But it was up in five days and, again, where sufficient moisture was preserved in the seedbed, has romped away since.

Also catching-up well have been our winter cereals. The wheats were around two weeks behind last season at T1 but only a week adrift at T2. And our T3s are going at almost exactly the same time as usual. We’re mainly using a co-formulation of tebuconazole and prothioconazole targeted at fusarium, with chlorothalonil where necessary for extra foliar disease protection.

The dryness and a T1 to T2 gap of no more than three weeks has taken the septoria pressure off. There’s still plenty of disease lower down the canopy, though, and we’ve a long way to go until harvest.

Two fungicide treatments in most cases have kept our winter barleys relatively disease free, despite the ramularia which is far more problematic these days. While we’ve needed fewer wheat PGRs than usual, we’ve certainly had to keep-up growth regulation on our hybrid barleys.

Our OSR seems to be in generally good shape too, with backward crops catching-up well, a generally short flowering and good pod set and early fill. The value of strong establishment and initial rooting has also shown-up in excellent across-the-board crop standing.

Unfortunately, the sheer amount of black-grass in many of our wheats this season means we’re going to have to think seriously about oilseed rape in some of our rotations. The weather really got in the way of winter cereal herbicide top-ups this spring and, in many cases, we aren’t getting the grass weed control we need in OSR despite the chemistry available. So, difficult as it may seem to contemplate with the season we’ve just had, where the black-grass is bad more spring cropping looks to be essential alongside the best glyphosate therapy.

Ryegrass control has also been a challenge for many, although delayed wheat drilling and robust pre- and timely post-em treatment has proved its value, with impressive differences in our demonstration plots causing considerable interest at this summer’s Brotherton iFarm open day.

Agrii agronomist, Sam Patchett works with growers across West and South Yorkshire as well as his own family’s farm (sam.patchett@agrii.co.uk).