AHDB’S latest midweek meals campaign is a cut above

Ninety per cent of people who saw the latest AHDB promotional campaign said it showed pork as a healthy food choice, according to new figures. 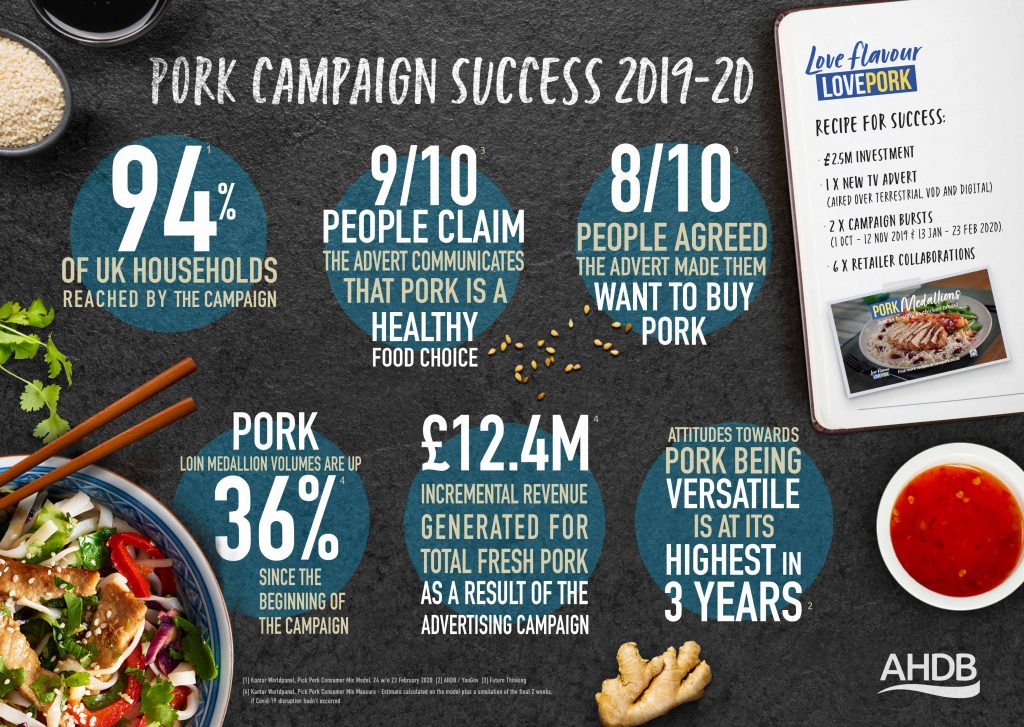 Ninety per cent of people who saw the latest AHDB promotional campaign said it showed pork as a healthy food choice, according to new figures.

The Mix Up Your Midweek work reached 26.3 million homes (94%) in the UK, with eight out of ten people saying the TV ad made them want to buy pork – leading to a £12.4 million sales uplift for total fresh pork*.

In particular, pork loin medallion sales are up 36 per cent since the campaign began.

The £2.5 million campaign sought to remind consumers of pork’s versatility and nutritious qualities by focusing on a range of globally inspired midweek meals the whole family can enjoy. The marketing push was launched with a light-hearted national TV advert, complemented by the use of digital channels, social media and in-store activity.

The latest burst of the marketing campaign, which ran between October 2019 and February 2020, delivered nearly 22 million impressions on social media and six million recipe views on video on demand.

Following the campaign, 90 per cent of consumers claimed the advert communicated that pork was a healthy food choice, with around a quarter of respondents remembering a health message spontaneously suggesting audiences engaged well with the creatives.

AHDB Board Member and Sector Chair for Pork Mike Sheldon said: “The latest findings on the Mix Up Midweek campaign are incredibly encouraging and we are delighted to see the continued shift in public perceptions towards pork.”

Building on this, AHDB Strategy Director for Pork Angela Christison added: “In the UK, we have a great product to sell and it’s fantastic that more consumers now see pork as a healthy, nutritious and tasty source of protein and one of the most versatile food ingredients around.”

For a range of pork-based recipes and a series of how-to guides, as well as information around the different pork cuts and healthy eating, visit lovepork.co.uk