Herefordshire farmer Ally Hunter Blair began his Instagram account as a way of sharing positive stories around agriculture, but has found that looking back over the photographs helps him to appreciate what he has. We spoke to Ally about farm life, the pros and cons of social media and life in a pandemic. 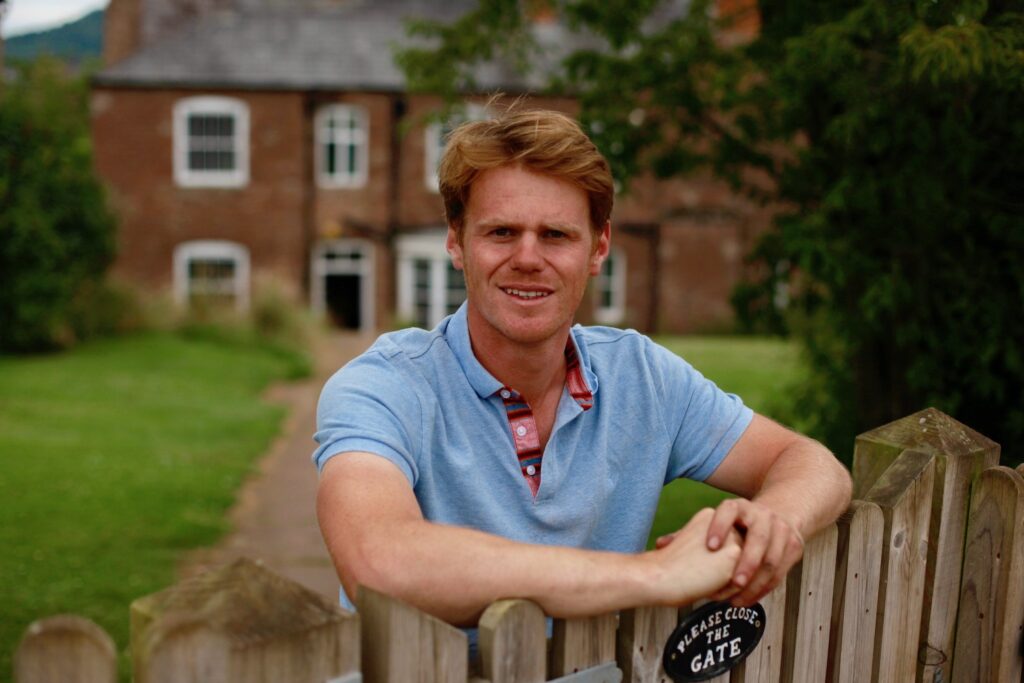 With 14.7K followers on Instagram, Ally is among the UK’s top farming influencers, taking a light-hearted and humorous approach when sharing his experiences on social media. For those thinking about starting a social media account, he says it’s important to be authentic rather than trying to copy what others have done before – he describes himself as a “mid-30-something buffoon who loves his daughter and likes where he lives”.

His account, @wyefarm, offers a mix of posts on his farming business, family life and stunning images of the landscape, taking an often-humorous approach to the challenges of farming, such as flooding. Ally says that while there are many farmers on social media who do an amazing job of tackling the misinformation spread about farming, he tries to avoid anything too controversial.

Weir End Farm is predominantly arable, rented from the Duchy of Cornwall and grows winter wheat, oilseed rape, spring barley, sugar beet and soya. While Ally says he considered computers or rugby as alternative career paths, “Secretly I was always coming back [to farming], I just tried to make it look like I was going to do something else. I love it and I’m very lucky.” He cites being his own boss as the best thing about farm life, though on the flip side this also makes it difficult to take time off.

Ally’s wife is a horse-riding instructor so the farm has diversified with an equestrian business, as well as setting up a glamping pod last year. Work is also underway on another glamping pod for the summer. Initially scuppered by the March 2020 lockdown, Ally says when restrictions eased, the glamping pod was booked 87 nights out of 93 from July to September, turning over what he had expected to turn over in a year in those three months alone – with so many people looking to get away and enjoy a staycation last summer.

Ally says he is keen to diversify as much as possible in order to ensure additional revenue streams, in light of Brexit and the replacement of the Basic Payment Scheme.

Another unexpected impact of the pandemic, he says, is the rise of food boxes, which generally use high quality British products. “Because they have more time, people are starting to cook again and butchers and farm shops have never been busier. So, in a weird way, the pandemic has made people think about where their food comes from again, which is something the industry has turned into a positive.” However, he notes: “I am concerned that when things open back up again, unless we can keep the ball rolling, we might lose that.”

Commenting on life in the pandemic, Ally says that while the social side of things can be difficult, lockdown has made him appreciate rural life even more. “You realise that lockdown in 500 acres of Herefordshire is really not the end of the world. We’re very lucky to be where we are. As an arable farmer, from a pure job perspective, the world hasn’t really changed.”

Isolation in farming is a well-known problem and Ally says that “as farmers we’re very good at being on our own mostly, but we spend so much time on our own that [social media] can give you a much bigger picture of the world”. Talking to other farmers globally, in countries such as America, Canada, Australia and New Zealand, Ally comments: “It’s nice to know what else is going on in the world and it’s nice that a lot of farming problems are pretty much worldwide – everyone whinges about the weather.”

Ally’s top tips for social media success are posting regularly to keep followers engaged and being authentic – “people will follow you for you,” he says.

Importantly, he adds: “Only do social media properly if you can take the fact that not everyone will like you. That took me a long time to work out. Some people are going to think you’re an idiot and they will follow you to tell you you’re an idiot. I find that very odd but it’s the way of the world.”

Opportunities in land planning and development