Varieties that are resistant to late blight can be agronomically very good, and Blackthorn Arable agronomist Martyn Cox says he has been pleasantly surprised at how good they taste. 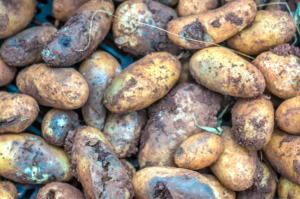 This statement is a long way from the early blight resistant potatoes, which had a sharp, unpleasant taste from crossing with wild genotypes, which were not popular with consumers.

It is a pity that there are varieties that are very resilient in the face of blight but yet are still very much under the radar of most growers. This is largely a marketing issue, and Mr Cox says there is a similar problem with the uptake of pallida-resistant varieties too, particularly in the chipping and packing markets.

One of the challenges over the last few years has been the new, aggressive strains of late blight. Of particular concern has been 37_A2, which is less sensitive to the fungicide fluazinam, which has resulted in many growers having to rethink their blight strategy and really put pressure on actives which are relied on for tuber blight.

Mr Cox says: “The genetics of the pathogen continues to evolve, and over the years this has allowed it to break variety defences and develop resistance to fungicides. A sudden shift could be catastrophic, which is why the monitoring work by David Cooke and the team at JHI is of such great importance. While mixes with mancozeb have held back resistance in conventional crops, once it is withdrawn, it will make control more expensive for conventional growers but the risk of selecting resistant isolates is the main worry.

“This, in turn, would impact on organic crops because varietal resistance, their main defence, could also be eroded very rapidly and with little or no warning. As such, it is likely to make highly resistant varieties even more important.

“For example, varieties such as Alouette and Kelly, which have robust resistance, have held up well to the new blight variants 6_A1 and 36_A2, but Kelly would be challenged with the new strain 41_A2 which is in Northern Europe.”

Good farm practice is also key to keeping on top of blight, and Mr Cox reminds growers of the importance of minimising inoculum levels which may have overwintered on tubers from volunteers or in potato dumps. “In an organic system, you have to be realistic about the crop potential, carefully consider the fields you are using for growing potatoes, and aim for rapid bulking. Planting close to high risk areas such as in the shade of trees is best avoided.”

However, he cautions, while they have well-proven resistance to late blight, not all varieties would work in an organic system as they are still susceptible to other pathogens such as early blight (Alternaria). This would also mean that fungicides were still required in conventional crops, albeit not as regularly.

There are so many requirements of a top variety, including PCN, virus, blight, dormancy, damage, blackleg, before we even get onto yield and quality, so really it is a mountain to climb, he notes.

“Whether you grow conventional or organic crops, with the more modern blight resistant varieties, you can get good quality crops with good yields.”

Thanks to top-class culinary and taste qualities, blight resistant varieties have come a long way since the early days some 35 years ago, says Agrico product manager Gavin Towers. In addition they offer potato growers serious agronomic advantages, he says.

Mr Towers says: “The choice of blight-resistant varieties now includes white and red packing varieties, salads, crisping and chipping. These can all compete with popular varieties, both in quality and yields, and they are more than well- suited for conventional markets.”

This includes crisping variety Beyoncé and chipping variety Fenna that have good dormancy and store well over the long term.
“These traits are in addition to conventionally-bred stacked genes which resist both foliar and tuber blight – and give the grower good yields too.”

He points out that varietal resistance is at the top of the Integrated Pest Management strategy triangle and saves growers money on fungicide purchase and application spend.

His team has calculated a potential grower saving of over £400/ha in fungicide inputs if a blight resistant variety is grown.

“We worked out that conventional growers spend around £11–12/t in controlling late blight, which on a 48t/ha yield, and current prices paid per tonne, does not leave much of a profit margin.

“The money saved on blight sprays could be invested in weather stations and blight monitoring and forecasting equipment.

“Managing risk is important, and using these tools together with blight resistant varieties would help growers move away from the current seven- day regimes required.

“In times of high blight pressure, they may then choose to make a timely application when they are spraying for something else, such as an insecticide for aphid control.”

This would also help protect the varietal resistance, he insists. Mr Towers goes on to comment that breeding for late blight resistance is not a new strategy, and the company has been working on a blight resistance programme for 35 years.

The first blight-resistant variety bred by Agrico was Toluca, which had input from crossing with a wild Mexican potato strains, but the challenge was that growers took a hit on yield. It was followed by Athlete in 2012 (named for the Olympic Games). Then came Carolus, which he describes as “an excellent eating potato”. It has a parti-coloured skin and a good dry matter content.

“With all the agronomic advantages of growing blight resistant potatoes, many growers have indicated they would like to make the change.

“However, there remains a surprising lack of interest in the sustainability of potato production from supermarkets and packers; moving forward we would like to see something similar to the Dutch covenant in which the supply chain actively supports a move towards more robust varieties.

“That would be a win:win situation for growers, retailers, and the environment as we manage the challenges of food supply, loss of chemicals, sustainability and profitable production systems.”

Blight control for today and tomorrow

Surge in sales due to changing weather patterns