A contest involving 50 North Yorkshire farmers has removed nearly 3,000 tons of carbon from the atmosphere in just two months – the equivalent of flying from London to New York 4,000 times. 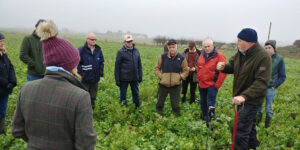 SOM has fallen by around 50 percent in the last 60 years, reducing soil quality, nutrient concentration, and its ability to absorb carbon and hold water.

Restoring SOM with the use of cover crops – dubbed pop-up rainforests by Sustainable Landscapes – enables it to absorb huge quantities of carbon from the atmosphere, helping to reverse the effects of climate change while at the same time dramatically improving soil health.

Growing cover crops also has profound consequences for water quality, as the increase in SOM locks crop inputs into the soil, preventing it from leaching off into local water courses.

Andrew Walker, Asset Strategy Manager for Yorkshire Water – a key partner in the Sustainable Landscapes program – said the competition demonstrated how growing cover crops was an essential tool in tackling a range of environmental issues.

He said: “The capacity of cover crops to sequester carbon and transform that into organic matter in the soil is remarkable.

“What is equally remarkable is the speed at which they can do this. With the right combination of plants, just a few weeks of growth absorbs large quantities of CO2, which means they can easily be adopted into a standard crop rotation.

“But it’s not just carbon that is being addressed. The increase in SOM and the root structure dramatically reduces soil erosion and the crops lock nutrients like nitrogen, phosphate, and potassium into the soil.

“These nutrients are then available for subsequent crops rather than being leached off into watercourses where they cause significant problems. Cover crops really are a cheap but highly effective way of tackling climate change.”

The farmers who took part in the competition collectively farm around 38,000 acres and were divided into three ‘innovation groups’ – Topcliffe near Thirsk, Elvington to the south of York, and Shipton, which lies north west of York.

The crops judged by visual assessment, measuring the amount of above-ground biomass achieved, and via soil analysis.

The overall winner of Cover Crop of the Year 2021 was Neil Chester of Fern Bank Farm, Disforth, who represented the Topcliffe innovation group.

Neil achieved a total of 85 tons of above-ground biomass.

Neil said the secret of his success had been the amount of time the cover crop spent in the ground.

He said: “One of the main reasons why this was such a good cover crop was because it was following winter barley and we were able to get it drilled in July, giving it a lot of time to grow.

“They say one day’s growth in August is worth a week in September and all of October.”

The cover crop reached chest height before sheep were allowed to graze it, which ensured nitrogen was available in the soil for the next food crop.

“The sheep digest the biomass, add the bugs to it, so most of the nutrients and biomass are still in the field, but the sheep have just taken a little energy out of it,” Neil said. 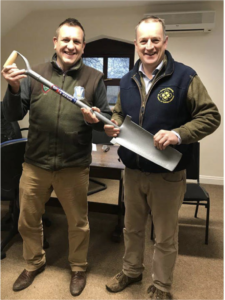 Paul Rhodes, Director or Future Food Solutions and Sustainable Landscapes, Presents one of the awards

He said: “We started Cover Crop of the Year three years ago as a tongue-in-cheek way to encourage the farmers in our innovation groups to grow more cover crops.

“Around 10 signed up for the first year. This year has been closer to 50.

“The crops are put in after harvest and desiccated in spring. The worms and bacteria break this down in the soil as SOM.

“The impact on soil is amazing. The cover crops significantly increase SOM which improves structure and health. They supercharge the biosystem and improve fertility.

“This year, the farmers collectively sequestered almost 3,000 tons of carbon, the equivalent of the carbon produced by running 1,200 average-sized family cars for a year, or flighting from London to New York 4,000 times.”

Mr Rhodes added you can ‘hear the crops before you seen them’.

“Because they’re grown through the winter, they provide a home and a source of food for lots of birds and are very attractive to pollinators,” he said.

“Their impact on biodiversity is fantastic and another reason why we should all be growing cover crops.”

ASDA Launches its first ESG report in a move towards sustainability