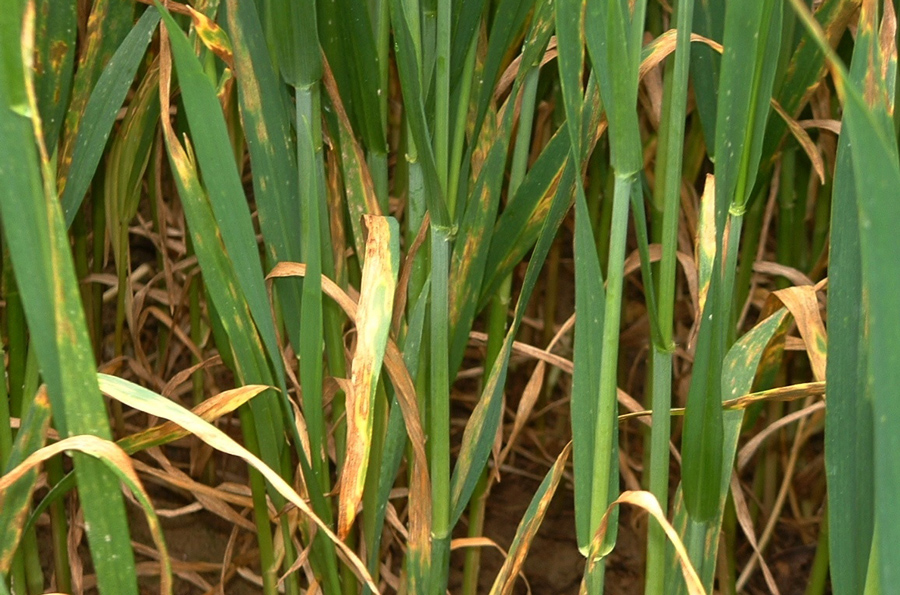 Moderate disease levels in wheat in 2018 due to the hot, dry summer generally resulted in cost effective but lower yield responses to fungicide programmes than the previous season, he points out

“Despite the dry conditions later in the season, the largest yield increases were often in response to the flag leaf or T2 timing in Hutchinsons small plot trials, although drought and subsequent early senescence reduced the response in many cases.”

In Hutchinsons winter wheat variety trials, the average yield response across sites and all varieties was 1.54 t/ha (17.28 % of final yield) compared to 2.64t/ha (28.48% of final yield) the previous season.

Dr Ellerton notes that there was a significant difference in response between varieties with Reflection giving a response 2.67 t/ha, while disease control in Santiago, Costello, Leeds, LG Rhythm and Gleam resulted in an increase in yield of over 2 t/ha (see table 1 below). 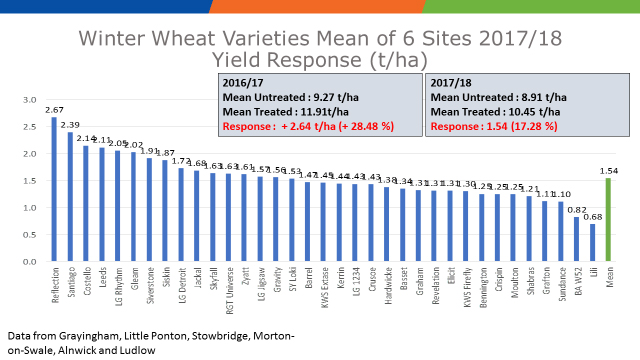 “It is important to realise that the gap between the flag leaf spray and the previous T1 fungicide should be a maximum of 3 – 4 weeks to continue disease protection, once the earlier spray begins to ‘run out of steam’,” he says.

This gap is even more important than in previous seasons, since AHDB trials in 2018 once again confirmed that Septoria resistance has limited the curative ability of many key fungicides such as triazoles and SDHIs, he says.

“However should the flag leaf not be emerging after this gap, then consideration should be given to an interim T1.5 fungicide application at GS 33-37 to protect leaf 2 rather than applying the T2 spray at too early a growth stage, leaving the later emerging flag leaf vulnerable to infection.”

“Diseases targeted at the flag leaf stage are usually septoria, rusts and occasionally mildew. Priority should be given to varieties with a disease rating of 6 or less on the AHDB recommended lists particularly for varieties susceptible to Septoria tritici, which is the most important disease of wheat, causing yield losses of up to 50%.”

The appearance of aggressive strains of yellow rust, which can overcome certain varietal resistances, has increased the importance of control at early stages of rust development, since these strains can build up quickly, causing significant impacts on yield, says Dr Ellerton.

He points out that where new generation SDHIs are applied on the flag leaf, their increased persistence on foliar diseases usually enables growers to concentrate on ear diseases with their T3 or ear emergence sprays.

“These should be applied just as flowering begins and are usually geared towards controlling Fusarium, Microdochium or sooty moulds. Where necessary, top-up foliar applications should also be considered, particularly if disease risk is high or the gap following the flag leaf spray is greater than 3 to 4 weeks.” 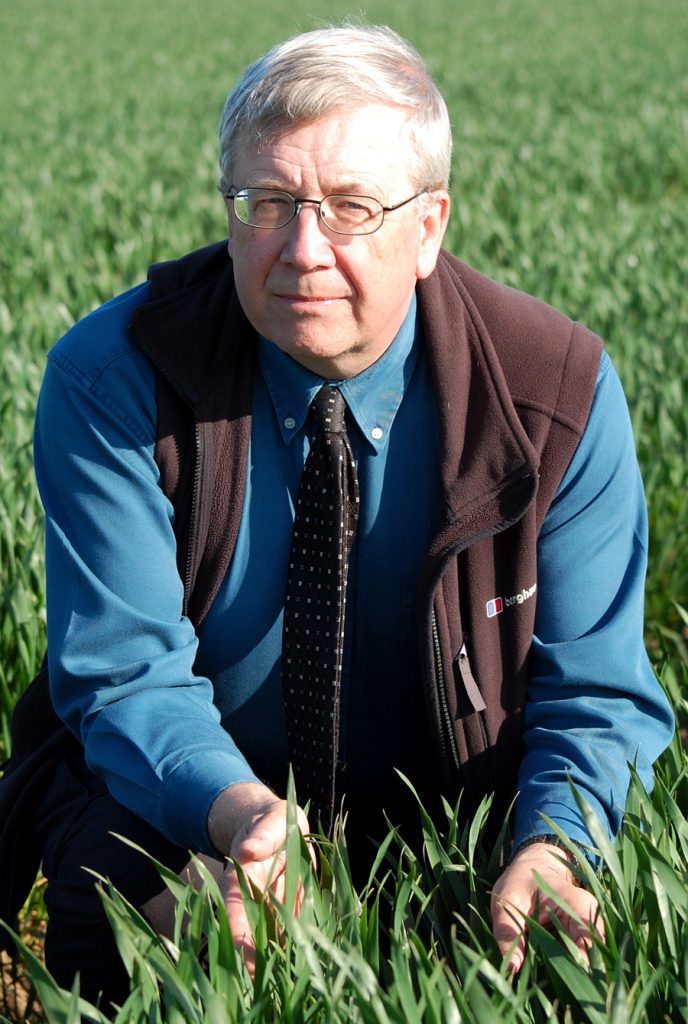 Dr Ellerton’s advice is that triazoles should still form the basis of T2 programmes and should be chosen to match disease risk in individual fields.

“Reductions in efficacy of the strongest triazoles on established Septoria have been evident in AHDB trials over a number of years and this was very evident in their trials in 2018. There is also evidence to show an increase in efficacy may be achieved by mixing triazole actives together, including prothioconazole or epoxiconazole in combination with others such as tebuconazole or metconazole.”

“Some trials also show that utilising metconazole at T2 may be a useful anti-resistance strategy, particularly if epoxiconazole or prothioconazole was applied at T1.”

In AHDB trials over the last few years, particularly in eradicant situations, the addition of a SDHI fungicides such as fluxapyroxad, benzovindiflupyr, bixafen and fluopyram to triazoles clearly improved protectant and curative control of Septoria tritici, resulting in significant yield improvements.

“This was also shown in Hutchinsons’ trials in sites across the UK over the last few seasons.”

“Recent work has shown that including a protectant multisite such as chlorothalonil or folpet, can not only improve persistence of Septoria control but are also an essential part of an anti-resistance strategy. However they should generally not be added to SDHI products based on bixafen alone, as antagonism has been noted in trials, particularly in curative rust situations.”

For ear emergence T3 sprays, triazoles again often form the base including active ingredients with activity on Fusarium (favoured by warm, wet conditions) such as prothioconazole, tebuconazole or metconazole/epoxiconazole, he adds.

“Where Microdochium risk is high (in cool wet seasons), the emphasis should be on prothioconazole (although in last seasons’ AHDB trials the multi-site product mancozeb was also found to give useful control).”

“The inclusion of a strobilurin such as azoxystrobin or fluoxastrobin aids disease control and can have significant physiological effects including increasing crop biomass and prolonging green leaf area retention leading to higher yield potential. Again including a multi-site may help with septoria protection.”

In winter barley, the T2 spray has often been regarded as less important than the T1 and is traditionally timed a little later at GS 39-49 – from flag leaf emergence to booting, often at the so-called paintbrush stage. However recent trial results often show a benefit of bringing forward the timing to GS 37-39 (flag leaf emerging) with an additional T3 application once the ear is emerging at GS 49-59.

The main purpose of the T2 spray is to prevent net blotch, brown rust and Ramularia (plus Rhynchosporium in wet summers) from invading upper leaves and ears, reduce senescence of spikelets and to increase grain numbers per ear, leading to yield increases. By extending the duration of the canopy, increased thousand grain weight (TGW) may also result.

As with wheat, triazoles, (particularly prothioconazole), form the basis of many barley T2 fungicide programmes. SDHI products such as fluxapyroxad or bixafen (although NOT fluopyram), in combination with triazoles, will give broad spectrum control of key barley diseases and should be utilised where disease risk is high, although evidence from recent AHDB fungicide trials suggest a reduction in activity of SDHIs against some strains of net blotch.

The most important recent change is that there appears to have been a rapid increase in Ramularia resistance to SDHIs and triazoles, meaning that inclusion of the multisite chlorothalonil at the T2 timing is critical in protecting against Ramularia infection. In Hutchinsons’ trials last season folpet has also shown useful activity against this emerging disease threat and this active will become increasingly important when chlorothalonil is removed from the market.

Where an additional T3 spray is to be applied this should be based on a reduced rate triazole plus a multi-site for extended Ramularia protection.