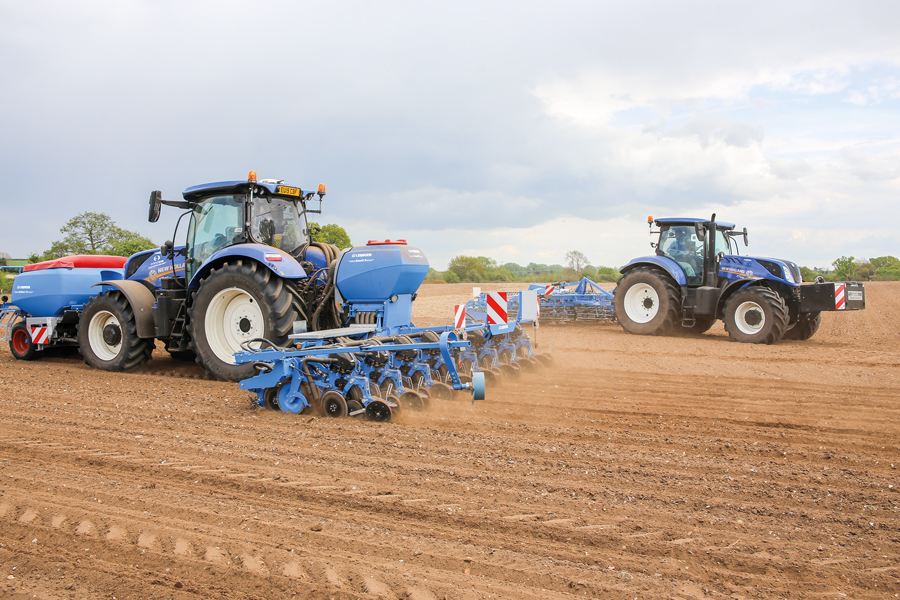 Lemken’s Azurit maize drill was first shown to the press in autumn 2015 and is designed to optimise maize population and yields by planting seeds in double rows to provide maximum growing space for each plant. Extensive trials in mainland Europe during development and since its launch have proved successful. This year four Azurit drills are working in the UK to establish the crop, two of which are demonstration machines and attracting considerable interest from potential users.

The DeltaRow seeding system includes a pair of residue wheels ahead of the coulter to clear trash followed by a fertiliser coulter, which applies nutrients between the twin seed rows. A trailing trapeze packer closes the fertiliser groove and rings consolidate the furrows.

Seeds are supplied to the singling units ‘on-demand’ and two synchronised perforated discs with adjustable mechanical or optional automatic scrapers distribute seed alternately to the two double-disc coulters of the seeding unit resulting in a repeated triangular seeding pattern.

Spacing between the seed rows is 12.5cm and space between each double row is adjustable between 37.5–87.5cm. Establishment by the DeltaRow system provides approximately 70 per cent increased growing area compared with conventional single-row planting, explains Lemken UK general manager Paul Creasy. To ensure seeds are spaced accurately the singulation units sit above the coulters providing a short 60cm direct drop down the seed tubes.

Ten-step hydraulic coulter pressure adjustment provides up to 135kg per unit and seeding depth is regulated by a large solid depth wheel between the coulter pairs. A V-shaped roller closes the seed rows and provides consolidation. 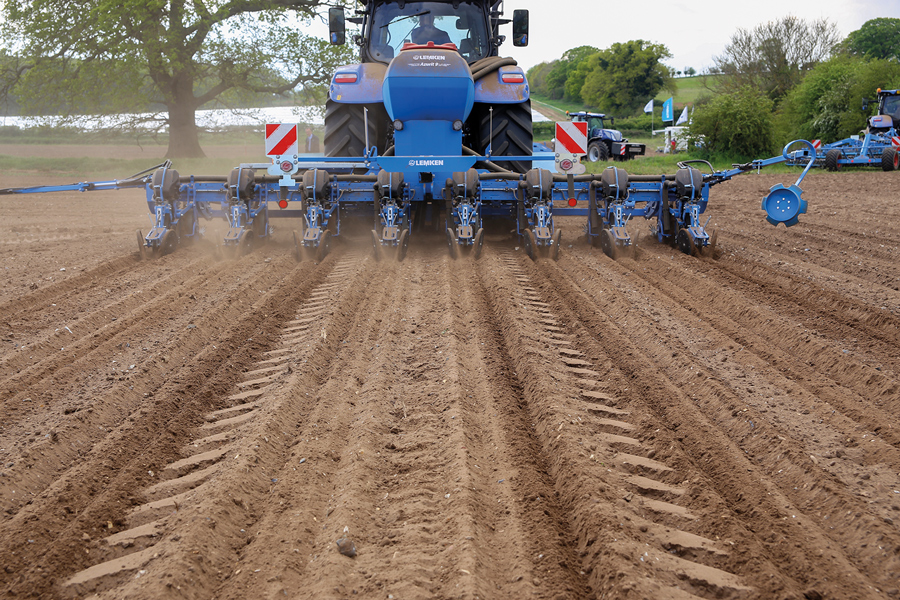 An advantage of the dual seeding units is that each singling disc only handles half the number of seeds of a conventional planter, allowing smaller discs revolving at lower circumferential speeds to be used, improving accuracy.

At Lemken’s press launch Azurit product specialist Lena Busch said almost perfect accuracy has been achieved in trials at up to 18kph, although more typical drilling speeds have averaged 12–15kph. “From the start of development our objective was to achieve 100 per cent accuracy,” she explained.

Because the double seed rows are wider than conventional single rows, where each tramline occurs the row closest to the wheeling is switched off, when an optional electric seed scraper is specified. However, rather than lose potential yield through reduced plant numbers the opposite disc rotates at twice the normal speed to maintain the population per hectare. An obvious concern of potential contractors regarding the wider plant rows is compatibility with harvester headers but during trials all header types have proved suitable.

“The Azurit drill is designed especially for maize and our trading area includes many large-scale growers including farmers and contractors,” explained Ernest Doe Wymondham branch sales manager Ross Johnson. “The weather on the demonstration day was ideal for maize drilling, but with more unsettled weather and rain expected, growers were under pressure to make the most of their own drilling opportunities. Lemken’s DeltaRow concept and its potential for extra yield is very attractive and while those who came were keen to inspect the rows and check the seed spacing and positioning for themselves, many who couldn’t make it are planning to travel to the field to check the emergence in a few weeks’ time. Visitors were from as far afield as south Essex, Cambridgeshire, Norfolk as well as Suffolk, and we have a lot of enquiries to follow up in the coming weeks. This drill gives us a full package to offer professional growers from planting, to harvesting by our New Holland Forage Cruisers all backed up by unbeatable after-sales service.”