Every farm uses gates, but more and more have begun to opt for a more advanced electric option. Some have made the jump for better deterrence against intruders or stronger biosecurity. Others have found the ease of use and extra convenience worthwhile. 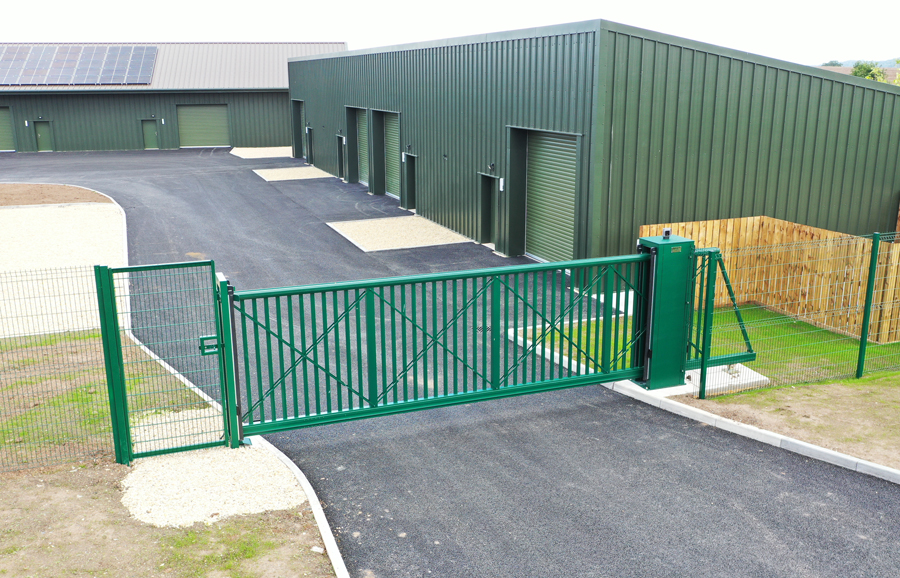 Rural crime is unfortunately on the rise according to a recent survey by the NFU that contacted over 2,000 farmers across the country, with 60 per cent of respondents believing that crime levels are increasing.

This escalation is all the more troubling considering it occurred during a year in which the nation was largely locked down due to Covid-19. The effects of theft or vandalism can take a heavy toll at any time, but especially during this period of unprecedented stress and pressure. Surveyed farmers that had suffered break-ins reported an average loss of £5,100.

Compromised farm security can also result in losses beyond the financial, important as that is. Mental health can be considerably impacted, which is already a serious problem for those in the industry. As many victims of theft can testify, the most unsettling aspect of the experience is often the emotional impact – a sense of violation and vulnerability.

Currently, trespass is considered a civilian – not a criminal – offence and thus police are not able to take action. As a result, the surest way to protect against most crime is to take preventative action and install secure gates that keep your land safe and accessible only to those you choose.

Every farm uses gates, but more and more have begun to opt for a more advanced electric option. Some have made the jump for better deterrence against intruders or stronger biosecurity. Others have found the ease of use and extra convenience worthwhile.

For Giles, a farmer at Don Bunting Farms in Maldon, the change came after their own experience with rural crime.

“Five years ago, we had a tractor stolen,” says Giles. “That is clearly a serious instance of theft. We needed something in place to ensure nothing like that would happen again. A simple padlocked gate just wouldn’t do the job.”

Don Bunting Farms approached Weaving Machinery, a family-run manufacturer and installer of farm machinery, including high-quality and secure electric gates. They settled on a 6m Sliding Gate, operated on an electric system without requiring a ground rail. Opening and closing the gate can be done instantly via smartphone.

“Only those we register have access,” says Giles. “Things like keypads or codes are not as secure as they might seem. All it takes is someone passing on the code or activating the trip and your security is compromised. With our gate, nobody can enter who we don’t want to. Even if someone followed us in, they would be trapped inside without registered smartphone access.”

Since then, Don Bunting Farms hasn’t had any issues. Even one incident – a crash that damaged the gate – saw a fast response from Weaving who came out and replaced everything by the next morning. “We didn’t even go a single day without security, which I hugely appreciate,” says Giles. “You don’t find many businesses that can pull a rabbit out of the hat like that. Our risk exposure was minimal.

“Our secure Sliding Gate has been pretty faultless,” adds Giles. “The robust design has proven to be an excellent deterrent. Operation is very quiet and easy. Safety features also add extra peace of mind. Sensors mean the gate will stop if someone walks in the way as it closes. It’s a well thought-out system and one that has made our farm far more secure than it had been previously.”

Prevention is the best protection

“Most of the time, people come to us in the event that they’ve been burgled,” says Ian Hinton of Weaving Machinery. “It’s understandable but taking action in advance is always the best choice, wherever possible. Your first line of defence is implementing effective security measures.”

Electric gates are a step above their standard counterparts, able to remain locked in place and inaccessible to all except those who are welcome on the farm. Simpler barriers offer little to no protection by comparison. Breaking in is quick and easy with the right tools. With an electric gate, intruders are kept out. Machinery and livestock remain protected.

For livestock farms, electric gates are also a hallmark of strong biosecurity. Disease can quickly derail production and deal a heavy and costly blow for producers. Electric gates only open for authorised personnel – putting you in complete control over who is permitted on your farm.

Additional features also help avoid other easy to miss yet harmful compromises to biosecurity, including a brushless motor system to prevent clogs of debris and the resulting maintenance, which would be frequently necessary for most electric gates that run on tracks. As a result, this gate can also be installed on any type of terrain, even uneven ground or slopes, so installation can be guided by effectiveness rather than necessity.

Gates are such a mainstay on farms that their power in creating a solid defence can go overlooked and underappreciated. The right electric gate can make a difference and protect against the threat of rural crime.

“Keeping your farm safe is a top priority,” adds Ian. “Examine your farm and identify where you can take action to maintain or increase security. Don’t wait for it to happen to you – choose an option that keeps your operation running without incident and secures your financial position.”

To find out more about increasing security on your farm, visit www.weavingmachinery.net/weaving-gates.