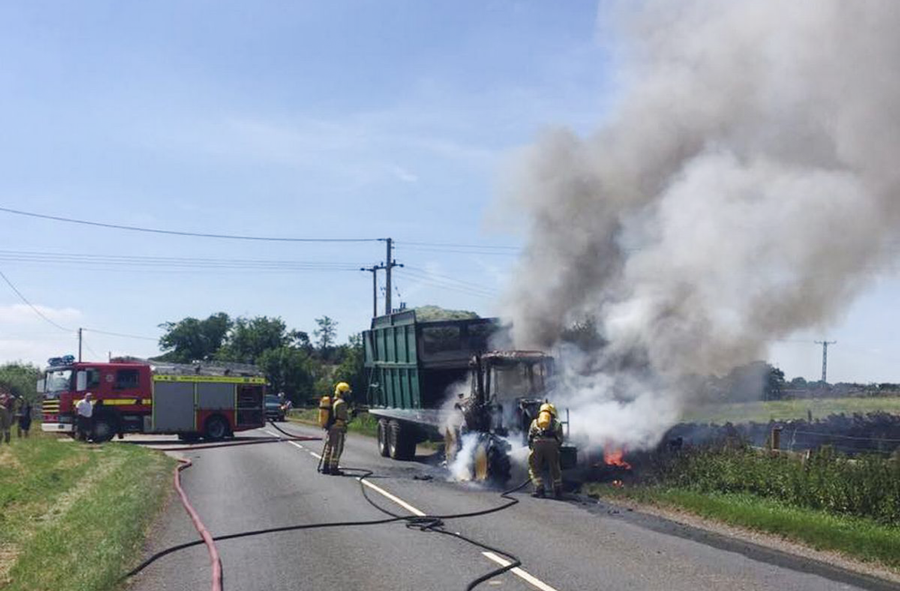 NFU Mutual launched a review into the causes, following an increase in tractor fires reported to the insurer. In 2019, the insurer paid out nearly £19m on claims resulting from tractor fires.

Following an examination of the causes of almost 1,000 tractor fires, NFU Mutual has discovered that a common factor in a number of fires in modern tractors was electrical accessories wired directly to the tractor battery cables.

When combined with the heavy current drawn from modern tractor electrical systems, these extra loads can lead to overheating and fires. NFU Mutual is now working with machinery manufacturers and dealers to identify potential problems and is urging farmers to get the wiring of tractor accessories checked and to ensure any new electrical equipment is wired through an ISOBUS connector.

Bob Henderson, Technical Engineering Manager for NFU Mutual said: “Over the last few years the number of tractor fires has shot up, putting lives of people and livestock at risk as well as leading to expensive damage and disruption of farming activities. A tractor is a significant investment for any farm and the damage from a tractor fire is often total.

“It’s often very tricky to find the exact cause of tractor fires because the intense heat makes forensic examination difficult.

“Traditionally accidental tractor fires have been attributed to overheating bearings and other moving parts starting fires – or chafed wiring causing a short circuit. However, NFU Mutual’s staff engineers, who inspect damaged machinery, were concerned that there could be another factor behind the rise in fires we have seen in tractors which are only a few years-old.

“During our in-depth investigation of these cases we have found a number of fires that have been caused by resistive heating of the battery terminal.

“In every case the battery terminal has either been altered or has had an additional power feed added. This can compromise the efficiency of the battery clamp, making a poor connection and increasing resistance. This then causes a build-up of heat to the battery clamp and terminal, which ultimately can catch fire.

“Older equipment is not so power hungry and drawing additional power supplies from the battery was an accepted method, unfortunately this is not so now. Manufacturers have now combatted the problem by fitting power strips to cabs and have also started to use ISOBUS connectors – both of which avoid overloading the battery wiring.

“These power strips and ISOBUS connectors can be fitted new or as an aftermarket fitment to any machine.”

For advice on wiring electrical accessories to tractors, farmers should contact their tractor dealers.

The versatility of the Omega seed drill

New additions to Hardi Sprayers for 2021