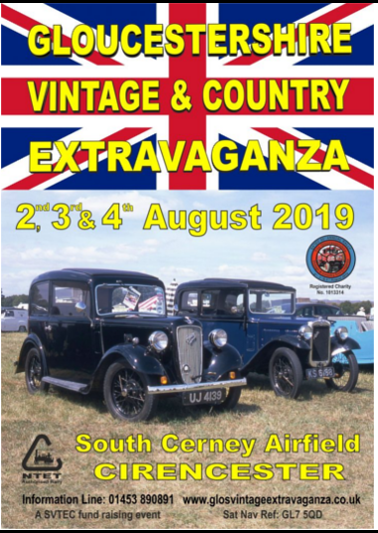 2-4 August 2019 will see the Stroud Vintage Transport & Engine Club (SVTEC) stage their Annual Show at South Cerney Airfield in Cirencester, Gloucestershire. The show now in its 45th year is widely regarded as one of the biggest and best Steam, Vintage and Countryside events in the UK. Set on an ex wartime airfield, the sprawling show site covers around 200 acres, with surprises around every corner, to suit young and old alike.

Over 200 classic tractors will be on display with both overseas and domestic manufacturers represented, plus a diverse selection of models, types and modifications dating from the 1920s to the 1980s showcasing manufacturers such as David Brown, Ford, John Deere, Massey Ferguson, Nuffield, Zetor, Leyland, Farmall and Field Marshall to name but a few.

Visitors will be able to see a WWII Wood Burning Tractor – one of the rarest tractors still in operation. Wood gas vehicles were used during World War II, as a consequence of the rationing of fossil fuels, at the time 4,000 tractors were produced. It will be letting off some steam in the arena as part of the popular ‘Dancing Tractors’ display.

Also making a welcome return is the 1919 International Titan 10-20 tractor. Owned by the Harris family from the Forest of Dean, the Titan was purchased in 2007 in a very rough state and has now completed a complete “nut and bolt” restoration over a 4-year period.

Aside from the magnificent tractor section visitors to the show can expect to see over 1000 classic cars from pre and post war, including over 80 Classic American cars, 30 visiting car clubs, 335 motorcycles and scooters, from 1903-1980, 30 miniature steam engines, 90 stationary engines, 70 full size steam engines, model engineering, over 70 Buses and Coaches, 130 military vehicles, 70 industrial trucks, 50 vintage caravans, 80 bicycles and over 50 model aircraft taking to the sky above.