Working to the conditions of the land was a top priority for Cornish farmer Tom Jones, who is hopeful that a new milking system will reduce the farm’s milking time to 2.5 hours. Meanwhile, for Welsh farmers Leo and Giles Rowland, reliability and technology were top of the list when they installed the UK’s first Centrus Composite Rotary System. 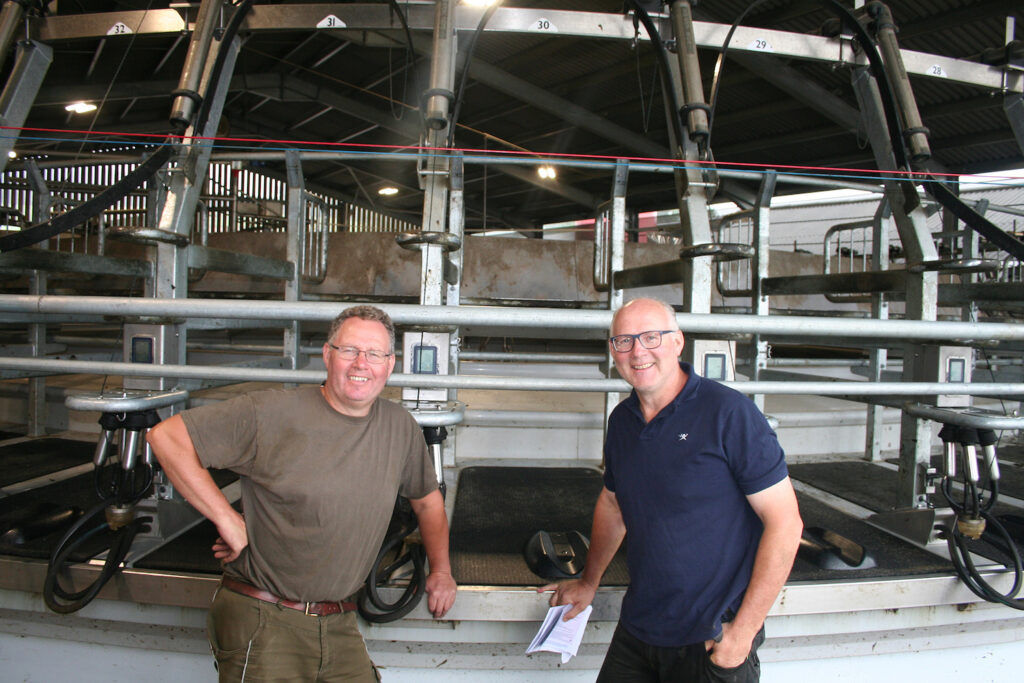 Leo and Giles Rowland with their Centrus Rotary System, which they say has lifted milk production since it was installed.

For Tom Jones and his family, who run Trelay Farm on the elevated terrain of Davistow in north Cornwall, keeping it simple was the key when it came to upgrading their tired 20×40-point herringbone milking system this year.

Tom is a third-generation farmer on Trelay, working the property with his father Chris, mum Jackie and wife Clare. They also have two part-time workers and a few relief milkers. Tom explains: “We had an odds and sods kind of parlour, really basic with no ACRs. We were picking cows for AI and it ended up being a nine-hour day. It was a case of something having to change.”

The farm moved from 300 to 450 cows when an opportunity came to rent some extra land and the family decided it was a good time to look for a new parlour.

“We were looking for efficiency to reduce milking time. I’m not a fan of over complicating things and we didn’t want a system with loads of technology.”

The one piece of tech that was a must was automatic cup removers.

“We wanted a parlour that could milk with just one person if needed and so ACRs were a must,” Tom continues. “We would normally milk with two people but if there is someone away, I needed to be sure I could do the job on my own and ACRs would cover off that worry.

“There were a few companies we looked at but I really liked the look and finish of the Waikato Milking Systems parlour.” 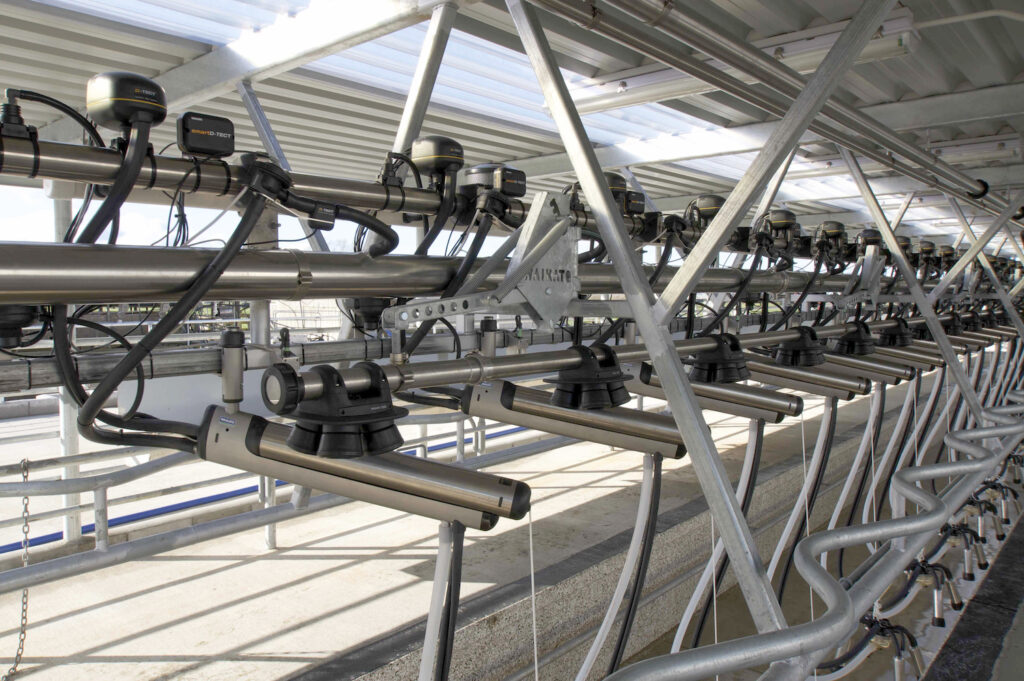 Work began on installing the new 32×64 Waikato Supa 4 inline milking system this summer. Tom says its key automation component is the ECR-S, an efficient automatic cup remover, which can be adjusted to detach according to set parameters. Retraction speed adjustment makes for a gentle disconnect from the cow’s udder.

Tom hopes the new parlour will reduce milking time to 2.5 hours with two people working. His advice to others looking to redevelop is to find a parlour that will “fit with your farm system”.

“If you have a high-yielding herd in a housed system, you’ll probably want a lot of technology to find out what each cow is producing. But for us, on a grass-based system, we just wanted something that’s going to be easy to operate and reliable to use every day.”

For Leo and Giles Rowland, reliability and technology were at the top of the list when they installed the first Centrus Composite Rotary System in the UK. The 50-point rotary was commissioned in 2018, replacing a 25-year-old, 25/50 swing-over herringbone.

The new Centrus is fitted with a high level of automation, such as SmartECRs; automatic cup removers; SmartSPRAY, an automatic teat spray system; SmartD-TECT for udder health detection and pulsation, as well as Electronic Milk Meters. Heavy duty bails keep the larger-framed Holsteins in order while the NaviGATE Sort Gate automatically manages the cows out of the parlour.

Leo says the Centrus is still living up to expectations on the 250-acre farm in Denbighshire, North Wales. Stand-out features include the cow-to-bail animal ID and the Electronic Milk Meters, which can help make better decisions for the herd. The Centrus also has bail displays which show real time milking information, alerts and manual options to draft or retain cows.

Milk production has increased since the farm switched over to the Centrus and there’s been keen interest in the system since it started milking. “We always say of all the things you could want to spend money on, it would be the Centrus deck, because it will outlast anything else.”

The deck is lightweight but very strong, which means there are fewer maintenance costs over time. It is also chemical and effluent resistant, and washes down easily: “We could give it a good wash down today and it would come out looking brand new again.” 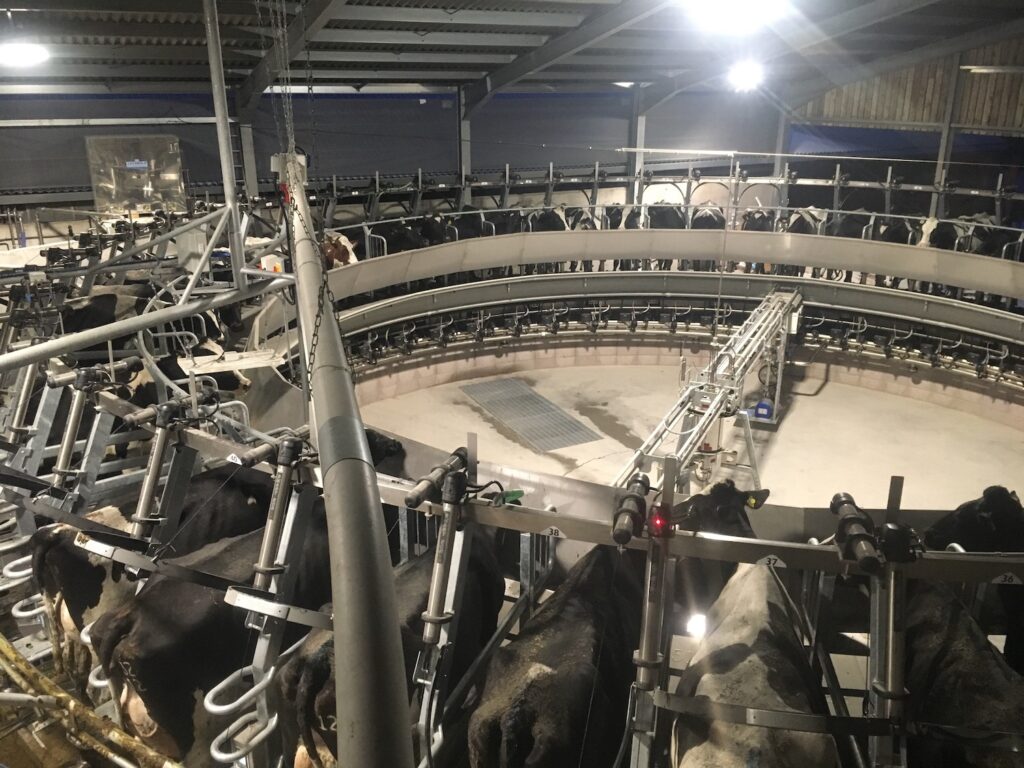 Milking automation technology is becoming a must-have for farmers looking to upgrade or install new parlours in the UK. Simon Hoare started work for Waikato Milking Systems about two years ago, after many more years working in the dairy plant industry.

“There is quite a lot of interest in automation, from grass-based systems to more intensive farming, from herringbones to bigger rotaries. And I think the beauty of the Waikato Milking System range of automation products is that they can be tailored to fit any level needed, and even be added to or upgraded later on.”

The company’s research and development into automation has become a big point of difference.

“We also recently formed a partnership with Nedap to release our CowTRAQ Collars and our TracHQ software, which really extends our ability in the automation space. And for us it’s more about the whole package, presenting our CowTRAQ Collars with our rotary and inline milking systems as a total solution.”