Brushcutters have a busy life on many UK farms and estates playing a vital part in keeping grass and weed growth under control. Sales of battery-powered models are increasing and Farmers Guide arranged an on-farm test of a petrol model and an equivalent electric version to see how they compared. David Williams reports.

Not long ago battery-powered strimmers were considered a novelty and a last resort for professional users, often selected only when lower operating noise was essential or for domestic users where storing petrol was an issue. Now, in common with other electric tools, improved battery power, capacity, and extended working times have made them a practical alternative and agricultural dealers report that a gradual changeover from petrol to electric powered models is in progress.

Farmers Guide asked Stihl to supply its most popular petrol model for farm tasks, along with an equivalent battery-powered model to compare, and lent both for a three-week test with Euston Estate on the Norfolk-Suffolk border.

Euston Estate is home to the 12th Duke of Grafton and his family and, along with extensive parkland as well as 28ha of gardens, there is a large farming enterprise including woodland, stewardship grassland, arable crops and a vegetable enterprise run in conjunction with RG Abrey Farms. There is an award-winning solar energy installation and an anaerobic digester for which maize is grown. Livestock include cattle, horses, pigs, sheep and poultry and with all the enterprises across more than 4,300ha there is plenty of work for the maintenance and groundcare team.

The brushcutters recommended by Stihl were FS111 petrol, and FSA130 battery models.

Jamie Fairs is a member of Euston’s gardening and maintenance team and is well used to working with a variety of brushcutters. As well as keeping paths and tracks clear of grass and brambles, and trimming areas which can’t be reached by tractor-mounted mower, his work includes maintaining verges and other grass areas around Euston village.

“I was very open-minded about the battery-powered version,” he explained. “Stihl is a respected manufacturer and I was quite confident that the electric model would be capable of professional use, but to what extent it could compete with a petrol machine I wasn’t so sure. I was fairly certain the battery model would be nicer to use with less noise and vibration.”

The FS111 petrol model was equipped with a Stihl AutoCut head which holds a reel of nylon line and automatically feeds out a set length each time the release button is knocked on the floor.

The FSA130 had a Stihl PolyCut head designed for trimming larger areas and which has three solid pivot-mounted plastic blades.

For the test Stihl supplied a backpack-type AR1000 battery. This is lithium-ion, incorporates a 6-led battery charge indicator and comes with a handle and waterproof cover. It’s comfortable and with the harness correctly adjusted you forget you have it on,” Jamie said. “It’s easy to take on and off and even though we had a week of exceptionally hot weather during the test period, wearing it was never a problem.”

Jamie said that because battery-powered brushcutters consume no power unless they are cutting, all the battery capacity is available for work. “This extends on-site time between recharging where petrol models are usually left idling for brief periods between use and continue to consume fuel,” he explained. “It also helps that with no clutch, the battery model can operate at lower engine revs for lighter work and there are three power settings allowing the user to reduce the operating power and speed for lighter tasks – maximising available working time, and reducing working noise.”

The battery supplied was the smallest of Stihl’s three backpack versions but still achieved approximately 90 minutes of cutting time at full power, equivalent to several hours’ typical use. Jamie said that charging overnight and again at lunchtime meant there was plenty of capacity for a typical day’s trimming although for continuous heavy work a larger battery or a spare would have been helpful.

The FS111 achieved approximately one hour’s work at full speed between refuelling, which Jamie deemed excellent in terms of fuel economy. “It’s got a very large fuel filler,” he said. “It’s much easier to access than any of our current brushcutters making it easy to refuel at the work site and it’ a great design feature. One of the best I have seen.”

For convenience; simply pressing the safety switch and pulling the trigger of the battery model was unbeatable, but that didn’t stop Jamie complimenting the ease of use of the petrol version. “Even after running out of fuel, whether hot or cold it started easily after a press of the fuel pump and was never any trouble.”

In work, the petrol model proved comfortable, quiet compared to the estate’s current machines and easy to use but Jamie said the electric version was quieter and more comfortable being almost totally free of vibration. He pointed out that whereas the petrol model continues to idle between cutting periods so there is always some noise, the battery version became silent when not cutting which made it less tiring.

“Both were well balanced and even with the lighter electric motor at the top, the position and angle of the cutting head was easy to control. One thing I noticed was that after a long period of use I was less physically tired as less effort was required swinging it from side to side. “

Apart from recharging the battery model requires little maintenance but the petrol machine was simple to prepare for a day’s work. “Everything is well designed and accessible,” he said, “and a feature I particularly liked was the transparent fuel tank making it easy to check the fuel level at a glance.

“The AutoCut head is easy to reload with line but there is plenty of capacity and even though it is lighter than the line we usually buy, it wasn’t refilled during a week’s heavy use.”

The electric model’s PolyCut head was liked by all the operators who found it effective and easy to use. Refilling was especially easy. “It’s very good on green vegetation,” said Jamie, “but we found quite quickly that it didn’t like tree stumps or walls so had to be careful where there were obstructions. We tried the cord head too, but found this was the one situation where the power wasn’t quite as good as the petrol machine and it struggled when presented with dense vegetation.”

Jamie said that by the end of the test he favoured the FSA130 battery model over the petrol, tending to use this from the start of each working period until the battery was flat, and then switch to the petrol. “I got on well with both and would be happy working with either, but the battery version was quieter, more convenient and more comfortable due to the lower vibration and I was very impressed. The petrol performed well too, and had a very slight power advantage for the heaviest work, so having it as a reserve worked well.”

Asked whether he would request a battery model when the estate’s brushcutters are next updated Jamie confirmed that he would, but with a higher capacity battery. “The battery life was impressive,” he said, “but during the final 20 minutes of working it was obvious without looking at the battery indicators that a recharge was needed.” 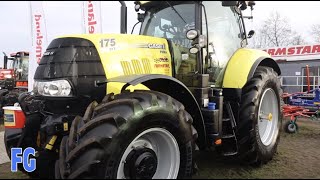