After New Holland introduced the first European self-propelled harvester, the advances in gathering in crops have continued unabated. While the primary purpose remains the same, technology and sheer scale have taken the process of gathering in the harvest to new levels. 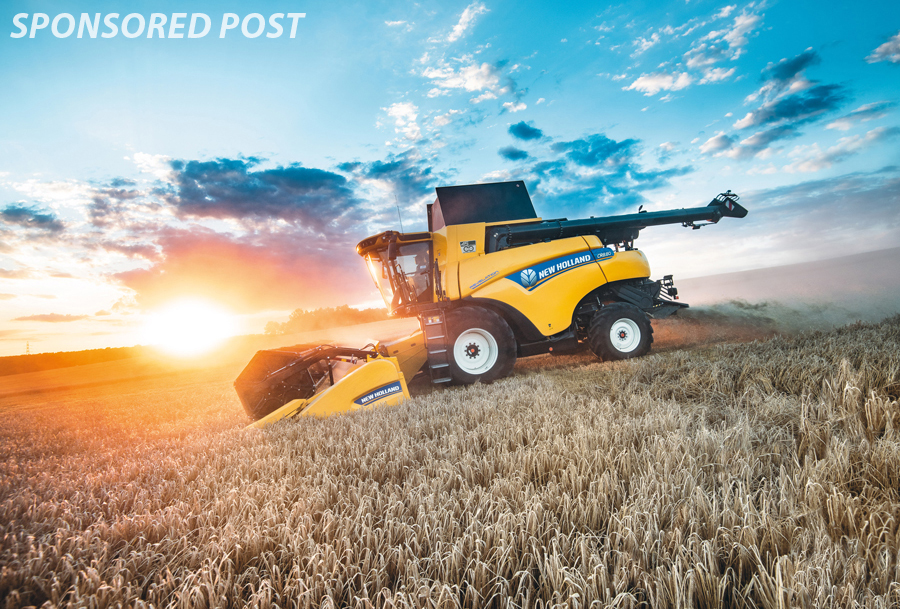 At its core, the primary principle of the founding fathers of the modern New Holland was to make life easier for farmers. At the turn of the last century, farming was the predominant industry in most countries. Now, mechanisation has delivered the efficiencies that has meant that while the percentage of the population involved in agriculture has reduced significantly, the demands on food production have also escalated.

This evolution has been enabled by ever-increasing mechanisation, but more recently the expanding use of electronics has spearheaded the latest moves for greater efficiencies. While farming likes to hold steadfastly to its traditional image, the digital age has not completely bypassed the fields. The “Information Age” has enabled data to allow better decisions to be made. In a world where efficiency and traceability have taken on a new significance, farming has moved to embrace the new challenges that it faces in the 21st century.

In all areas of agricultural mechanisation, this evolution can be seen most clearly when looking towards combine harvesters. After New Holland introduced the first European self-propelled harvester, the advances in gathering in crops have continued unabated. While the primary purpose remains the same, technology and sheer scale have taken the process of gathering in the harvest to new levels.

One key change that harvesting has seen over the last 50 years is the development of rotary separation. Early farm mechanisation closely followed replicating traditional processes – just as the introduction of the three-point linkage freed the tractor from simply using scaled-up horse -drawn implements, the development of rotary separation has enabled combine harvesters to make a step-change in terms of capacity.

The United Kingdom is at the forefront in Europe of the move to Rotary separation, with almost 65% of all new machines sold featuring a uniquely powered separation system. But it would be wrong to assume that the conventional, straw-walker machines should be consigned to the history books. These versatile, lower output machines have a secure future where attributes such as their simplicity and suitability for smaller operations are appreciated and it should come as no surprise that New Holland still leads the industry in advancing straw-walker technology.

From four to six straw-walkers, and from 175hp to 460hp, New Holland offers customers a broad portfolio of conventional combines. All models feature a Rotary Separator to increase the powered separation area and reduce the load placed on the straw-walkers, a technology that New Holland first introduced in the mid-1970s and that other manufacturers have since imitated.

But the CX range goes further in improving the efficiency of the straw-walkers through a technology called OptiSpeed. OptiSpeed introduces variable speed straw walker speed that helps keep the crop for the optimum time on the walkers.

Before variable speed walkers, combine manufacturers had to compromise on walker speed, opting for a passage speed that might have been faster than ideal, but done to prevent straw walkers blocking on downward slopes. With an attitude sensor on the CX combines, walker speed can be instantly adapted to cater for all slopes; speeding up on downward slopes to prevent blockages and slowing down on upward gradients to prevent grain losses over the rear of the combine and so maximising the separation power of walkers.

Coupled with cleaning shoe slope compensation; SmartSieve on TC and CX5 and CX6, which alters the amount of side shake according to not just the gradient but also to the size of the grain on the sieve and the fully self-levelling cleaning shoe on CX7 and CX8 that first saw the light of day on the TF combines in 1985, rolling farmland and gradients holds no limitations for New Hollands range of straw walker machines. 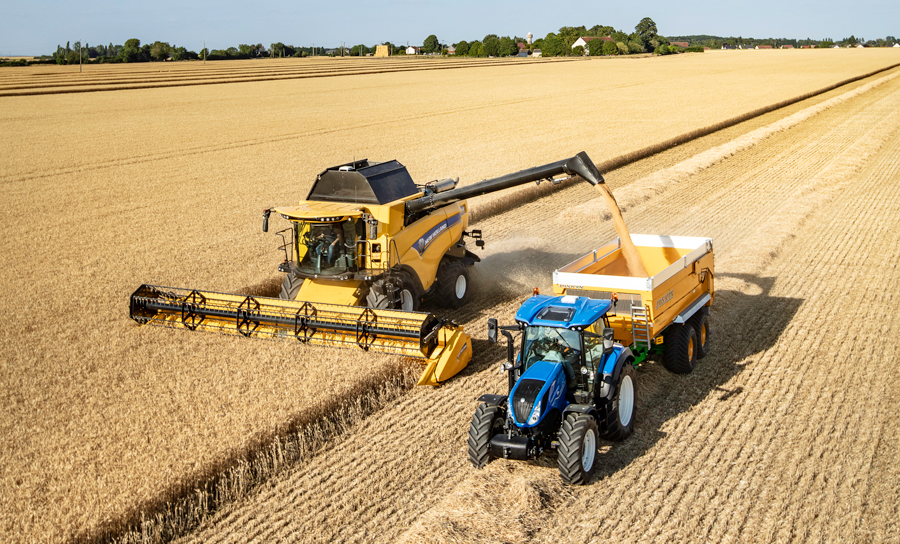 20 years ago, New Holland’s flagship CX range introduced a 750mm threshing drum. This oversized drum offered the maximum threshing area for effective and yet gentle threshing. With the introduction of UltraFlow, the rasp bars on that drum are now staggered and segmented, offering operators a wider window of opportunity to harvest but benefitting from a smooth and silent crop flow.

The smaller CX5 and CX6 models also benefit from innovative design. These models feature OptiThresh – a variable geometry concave that enables operators to choose how aggressively they thresh the crops. While a conventional combine can only alter the drum speed and the concave clearance, a simple lever on the side of the combine enables the wrap of the concave to be altered from 121⁰ to 82⁰. This means that crops that do require aggressive threshing such as late, fit wheat or oil seed rape can benefit from a less aggressive concave; preserving the straw and minimising the load on the cleaning shoe.

The latest addition to New Holland’s harvesting range is the CH7.70. Combining the proven drum and OptiThresh concave of the CX6.90 with a twin rotor set up to cater for separation, the Crossover Harvesting concept offers the best of both worlds. 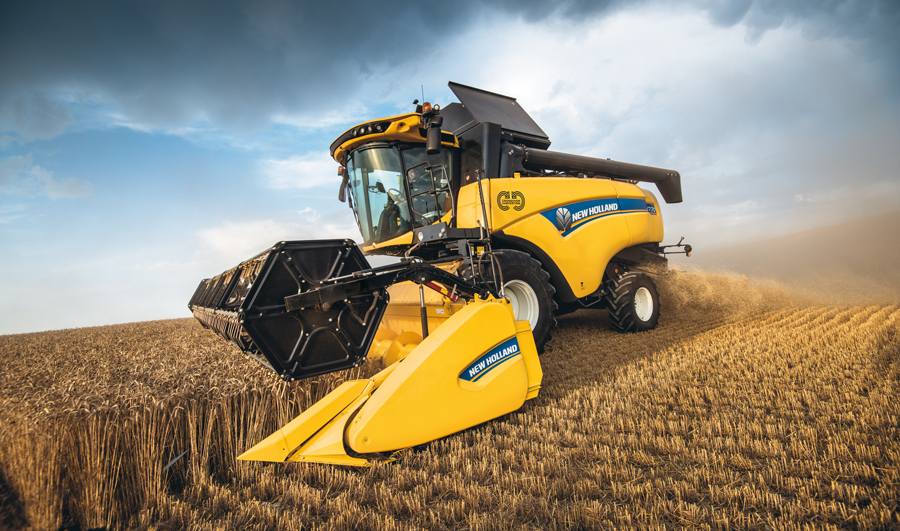 Aimed at offering users the straw quality of a conventional combine with the low grain damage that can only be achieved through New Holland’s Twin Rotor concept, the CH7.70 delivers. While New Holland has been loyal to its Rotary Separators since 1975, the CH concept casts aside this technology as the twin rotors provide sufficient separation force to do without but also to minimise damage to grain. No longer will maltsters or seed merchants be looking to skinned and cracked grain as a reason to reject loads as gentle grain handling can result in crackage levels below 1%.

Straw quality is addressed by the slower speed of the twin rotor design. With an easy two-speed adjustment and slow maximum speed of only 700 rpm, the rotors can gently and effectively remove the grain from the straw mat – the twin rotor design offering a thinner crop mat for more active grain removal. A simple driveline offers reduced daily maintenance, easier servicing and a lower cost of ownership.

The current range of CR combines can trace their heritage all the way back to 1975 and the launch of the TR combine range. Throughout 45 years of evolution; while rotor design, crop path, cleaning shoes and grain handling have all changed, the core Twin Rotor concept is still clearly evident.

Based around two chassis widths and rotor diameters, with power ranging from 415 hp to a mighty 700 hp in the world record holding CR10.90, the CR offers customer looking to upgrade to a rotary machine a model to suit their needs. While the CR has evolved through the introduction of the OptiClean cleaning shoe, the Dynamic Feed Roller and a Residue Management system that chop and spread straw and distribute chaff to match the widest headers, the latest CR machines also feature IntelliSense – the self-setting and feed rate control system that lets drivers fully benefit from all the hardware improvements seen on the CR range over the years. 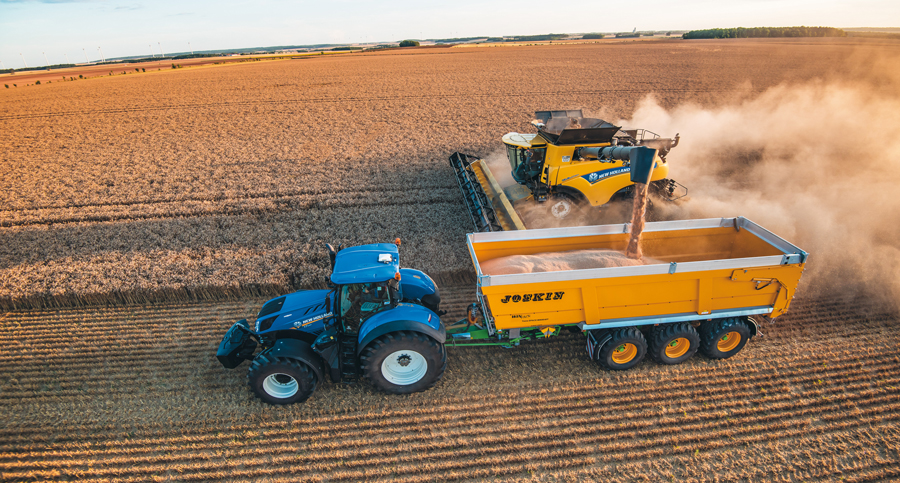 Through automation such as IntelliSense, that mechanisation can reach new levels of efficiency. Regardless of the skills and experience of the operator, IntelliSense enables farms to get the most from their machinery investment – helping modern agriculture to lower the cost of harvest per hectare through reaching greater efficiencies.

The digital revolution is now sweeping through agriculture and in times to come, as margins become ever tighter, the incremental increases in efficiency that technologies such as IntelliSense can offer may make the difference. Through innovative engineering and now, digital automation, New Holland remains at the vanguard of innovation and sustainability.

All good things come in threes: Triple-Shoot with the Cirrus-CC