Heifer rearing: How to get more from your investment 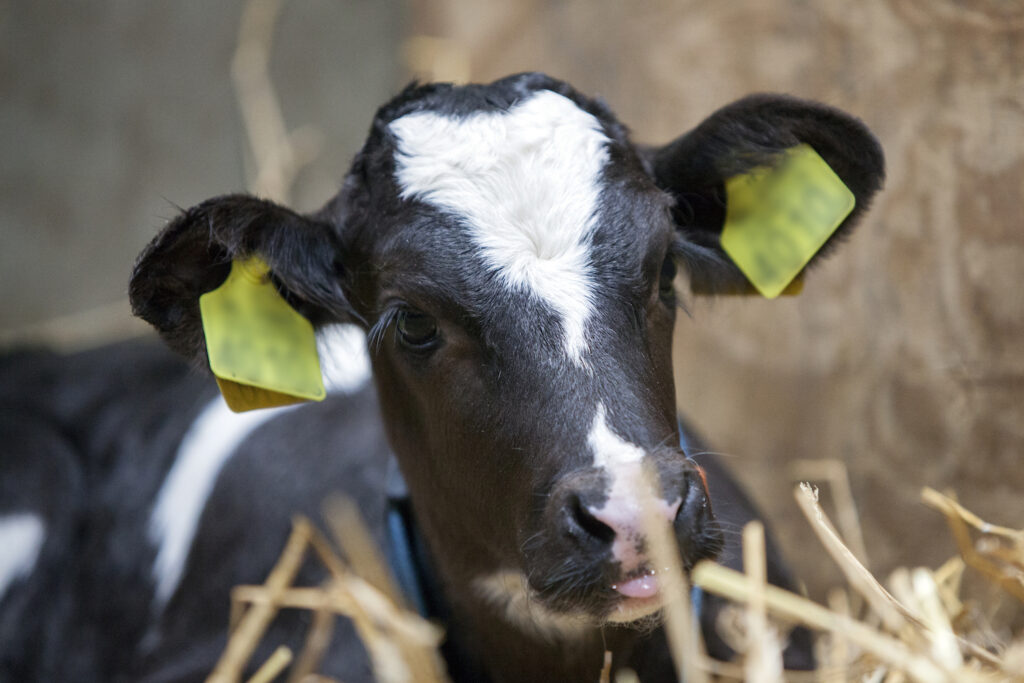 While traditionally, milk feeding would be slowly increased, followed by very rapid weaning, Volac’s Jessica Cooke believes we must flip this milk curve on its head to maximise profitability.

Research has shown sub-optimal growth during 1-6 months of age can lead to breeding and first calving at older ages. There is also a significant impact on long-term health, with those calving for the first time at 23-25 months having better fertility, better survival and higher five-year milk yields. In addition, more of these heifers achieved a third calving.

Dr Cooke pointed out: “As heifers do not become profitable until they are halfway through lactation two, it is absolutely critical that as many of these heifers actually survive to the third calving to ensure a profitable enterprise.”

Targets should be set through the weaning period, starting from day one, to ensure the correct growth curve, she adds.

Areas to manage for success are health, environment and nutrition. Nutrition comprises colostrum (3 litres of good quality clean colostrum should be given in the first two hours, then another 3 litres the first 12 hours); milk and starter feed.

Making the most of early feed efficiency

Over the first two months of life, feed conversion efficiency is up at 50 per cent, dropping off to 36 per cent when weaned and less than 10 per cent at breeding. Dr Cooke stressed that farmers should make the most of this early efficiency for growth. 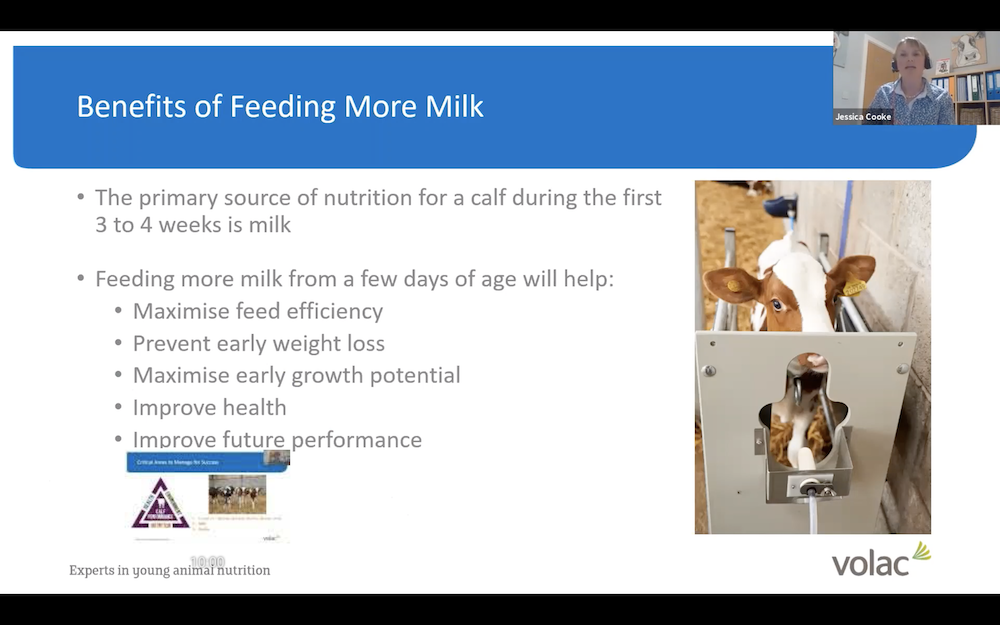 Dr Cooke recommends feeding 5 litres/day by day 7, increasing the volume to a minimum of 6 litres per day from week 1. This would equate to 750-900g/day milk solids, depending on mixing rates. For those wishing to increase this further, the peak should be reached by two weeks of age, and care should be taken to offer no more than a maximum meal size of 3 litres per feed.

If we are to double bodyweight by weaning, this would equate to 0.7kg/day average gain, assuming a birthweight of 40kg (40kg+40kg over 56 days).

A word of caution

Caution was advised as higher milk intake can delay solid feed intake, compromising rumen development, as calves are not driven by hunger to eat starter feeds.

Ways around this include:

Additionally, there have been some concerns that feeding more milk can lead to scours, but Dr Cooke stressed that diarrhoea is more likely to be caused by an infectious pathogen or management factors. In fact, evidence suggests those fed more milk are better able to withstand disease challenges due to the energy demand required for an immune response.

The environment must also be considered. If temperatures fall below the Lower Critical Temperature of 10-15ºC for calves aged 1-6 months, growth rates will be impacted as energy is diverted away from growth towards keeping warm. Feed levels may need to be increased to compensate, as well as housing improvements and calf jackets.

Vaccination – what are the options?

Veterinary advisor for Boehringer Ingelheim Animal Health, Ailsa Milnes, offered her insight into the importance of keeping calf disease to a minimum, as well as focusing on nutrition.

Nearly 15 per cent of live born heifers fail to make their first lactation, with 25 per cent of deaths occurring in the first three months of life. Key causes under one month are scours and lack of colostrum, while at 1-6 months, it is pneumonia.

The more lung lobes are affected, the more growth rates are impacted, Dr Milnes explained, with losses ranging from 71-200g. If aiming for growth rates of 0.8-1kg a day, this could represent a 20-25 per cent decline – which is going to affect farm and rearing costs. 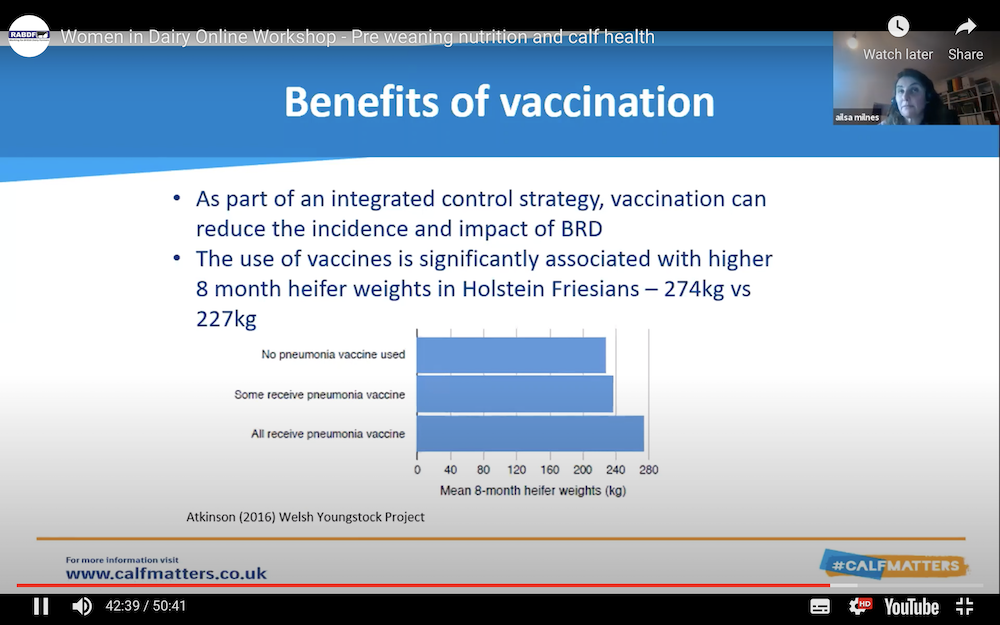 Discussing vaccination as part of the strategy to reduce disease, she recommended speaking to your vet for tailored advice to your own farm.

Two different BRD vaccine types are available, with differing pros and cons. Intranasal vaccination offers rapid mucosal immunity, is effective in younger calves and can overcome potential problems with maternal derived immunity. However, there can be a shorter duration of immunity.

Systemic vaccination, on the other hand, usually requires two doses and takes longer to achieve immunity. It tends to be given later and offers systemic immunity. It also covers a wider range of pathogens and provides a longer period of immunity.

Research suggests heifers that are vaccinated fully had higher weights at eight months of age, compared to those that were never or sometimes vaccinated (274kg versus 227kg).