Is ferric phosphate a force to be reckoned with?

With the phase out of metaldehyde-based pellets for the control of slugs, many growers and agronomists are now actively looking to switch to ferric phosphate products this autumn. 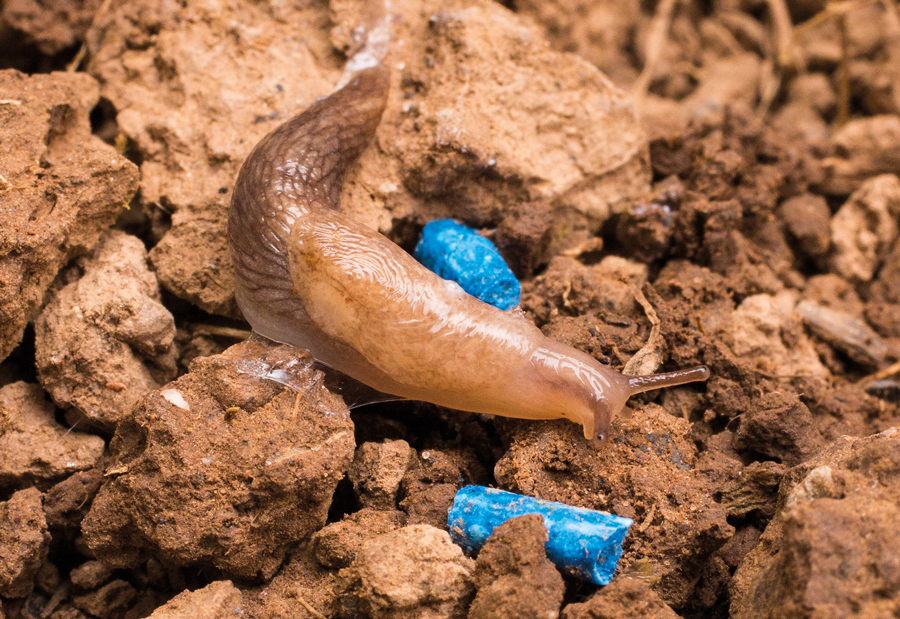 The saying ‘old habits die hard’ can often be attributed to aspects of farming in the UK where traditional operations have remained unchanged for two or three generations, in spite of the fact that alternative and more effective systems or products may have been developed in the meantime.

However, in the case of slug control where last year 70 per cent of UK pellet use on farm was made up of active ingredient metaldehyde, change is going to come very quickly.

As has been well documented, the battle to keep metaldehyde as an option for slug control, despite the significant industry-wide effort co-ordinated by the Metaldehyde Stewardship Group, ultimately failed and, as from 30th June 2020, its use will be prohibited on farm.

However, the remaining 30 per cent of UK farm slug control in autumn 2018 was implemented using pellets containing alternative active ingredient ferric phosphate – evidence that a substantial number of growers and agronomists have already made the switch.

Crop protection company Certis has significant experience of ferric phosphate-based pellets, selling them for 10 years in the UK, and has recently launched its ‘Ferric Field Technology’ mark of assurance for its Sluxx HP brand of pellets.

Arable product manager, Neil Beadle, reckons that this is a watershed moment for a change in slug pellet use, despite the fact that metaldehyde use-up date is not for another 12 months (last sales however will occur on 30th June 2019). “Without doubt a large number of growers will start to use ferric phosphate slug pellets for the first time this autumn,” he said, speaking at a briefing hosted by the company in early May. “With a use-up date looming next year, growers will not want to be carrying over large stocks of metaldehyde pellets into the spring where there is little use of product by comparison with the autumn.

“With our long experience of ferric phosphate pellets, Certis is well positioned to advise growers on how to get the best out of this active,” he added.

How does it work?

According to the company’s technical manager, Laurence Power, one of the most obvious differences between the two actives is the way slugs die following uptake. Whereas death from metaldehyde ingestion occurs relatively quickly, with slug carcasses notably visible on the surface, following consumption of ferric phosphate pellets slugs often retreat under the soil surface and die 2–4 days later (depending on the size of the slug).

“Agronomists and farmers are used to seeing dead slugs on the surface following metaldehyde treatments, and this is the key message to get out – don’t look for dead slugs, look for crop damage to see if that has ceased,” he stressed.

“Once a ferric phosphate pellet has been eaten then feeding on the crop stops almost immediately,” he added.

Mr Power highlighted trials work demonstrating that mortality comparisons between Sluxx HP pellets at 5 and 7kg/ha rates, and those of metaldehyde pellets (at 3 and 7kg/ha), are very similar when the temperature is at 20ºC.

However, when the temperature was reduced to 10ºC, the mortality percentage difference between the two actives was significantly different, in favour of ferric phosphate.

“This is an important factor when you consider that we are now drilling crops much later in the autumn because of black-grass, often in October and even into November, when slug grazing is still occurring. Ferric phosphate is working better at those (10ºC and below) temperatures.”

A further advantage is ferric phosphate’s environmental profile, continued Mr Power. “Unlike metaldehyde pellets, Sluxx HP has no buffer zone restrictions which makes it easier to use and offers full field protection. Metaldehyde use requires 10m restrictions around field boundaries and therefore growers have had to adopt mixed treatments of both metaldehyde and ferric phosphate to complete a field.

“In addition, toxicity studies demonstrate there there are no issues for aquatic invertebrates in watercourses, or other wildlife, as a result of ferric phosphate use and it can also be used in an organic situation,” he added.

What makes a good pellet?

Spreadability, durability and palatability are the hallmarks of a quality pellet, pointed out Mr Power, highlighting the fact that being made of durum wheat maintains Sluxx HP pellet durability and form during application and in rain events, while the pasta-based wheat it is made from is more palatable.

“Spreadability of pellets is one of the most important aspects of application, and while growers may not have put much thought into this, machines need calibrating. Spinning discs must be able to spread well, and put the pellets where they are needed and at the right rate,” said Mr Power.

Certis recommends Sluxx HP is applied at the full dose rate of 7kg/ha, giving 60 pellets/m2 (more baiting points than other ferric phosphate products at the same rate) and which the company believes is the critical level for slugs to graze sufficiently for good control.

Mr Power pointed out that ferric phosphate should always be used as part of an integrated pest management (IPM) approach, and monitoring for slug pressure before application is vital.

“It’s important that growers use traps and monitor for slug pressure as soon after drilling as possible,” he continued. “Ideally this should be when the soil surface is moist, when temperatures are within 5–25ºC and using a grain-based bait, rather than a slug pellet.

“Use something that is palatable and put 9–13 traps in a ‘W’ pattern on a 20ha field. Distribute them well, while also thinking about where the hot spots are in the field. Leave them overnight and examine early in the morning, remembering that treatment thresholds for winter cereals and OSR are 4 per trap, and 1 each for potatoes and field veg,” he advised.

“Cultivations are also a key part of IPM and growers should ensure that machinery is set up as it should be, while consolidation of the seedbed is key.

“Make it as difficult as possible for the slugs to move,” he added (see panel below, right).

Slugs are rarely distributed evenly across a field and the trick is to identify the areas where slug activity is taking place and apply treatments locally, advised Newcastle University’s Dr Gordon Port (left), also speaking at the event.

“Most slug activity in brassica crops occurs within 1–2m of the field edge as they move in from the margins and is less likely right the way across a field due to the intense cultivations. But in arable crops they like the dense foliage right across the field, although they are not uniformly located.

“Slug density is probably historic because of the condition of the soil that they like,” he added.

According to Dr Port, pellets used to control slugs are not the only weapon, rather they should be seen as a last resort. “Field margins may provide a source of natural enemies such as ground beetles, which consume slugs, although they won’t control populations on their own.

“Achieving a good tilth in cultivation work, and rolling at night, is also beneficial in controlling slugs. Cultivations are good at interfering with slugs, particularly deep ploughing, but growers have to balance this against the cost of the operation and the effect it is having on the soil. No-till systems will help with soil preservation but then it can result in a lot of slugs.

“That said, any sort of cultivation or tilth reduces the number of slugs in terms of an integrated management,” he added.

For companion or cover crop management, Dr Port suggested that while these bring the benefit of an improvement in soil texture, they also provide food and shelter for slugs. “There’s no evidence at the moment to suggest that direct drilling into a cover crop has an influence either way on slug populations, but if I were trying to minimise slug damage I would remove the cover crop first and carry out some cultivations.”