For Case IH main dealer Collings Brothers, the decision to hold an open evening rather than an open day this year proved worthwhile, as customers made the most of ideal weather for field operations before their visit. David Williams attended. 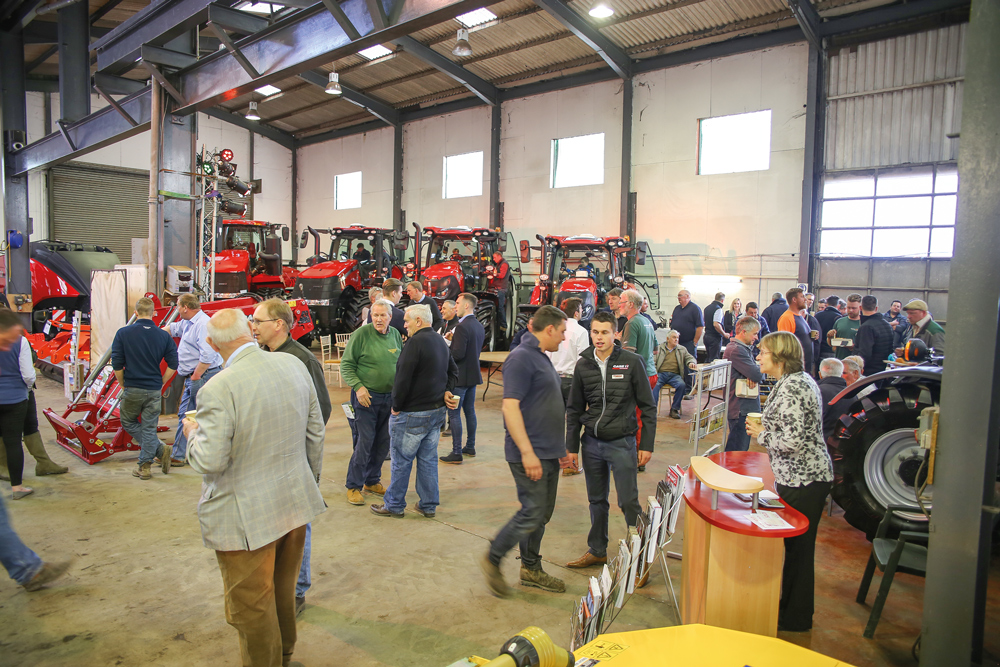 For Case IH main dealer Collings Brothers, the decision to hold an open evening rather than an open day this year proved worthwhile, as customers made the most of ideal weather for field operations before their visit. David Williams attended.

The dealer operates from two branches at Abbotsley, Cambs and Brigstock, Northants, looking after customers in Bedfordshire, Hertfordshire, Cambridgeshire and Northamptonshire. Annual open days at its Abbotsley main depot on the Wednesday before Easter have been popular with farmers in the area for many years.

Along with Case IH, main brands represented include Kuhn; Richard Western; Bomford and Cousins, along with Martin Lishman; Laumetris; MacDon; Cherry Products; Stocks Ag; Yamaha; Husqvarna; Abbey Machinery and Lynx. New at this year’s event was Kioti which satisfies demand for smaller compact tractors for equestrian and groundcare use.

The Martin Lishman moisture meter grain clinic is an annual feature at the event, attracting growers from across the trading area who take advantage of the convenient grain moisture and temperature meter testing service.

Collings Bros sales manager Jason Weston said the event pleased dealer and manufacturer staff as well as customers. “Compared with the past two years, attendance was well up, and timing it later in the day meant farmers could take advantage of excellent weather for late drilling and spraying, then joined us later to find out about the latest products and chat with others in the industry. We received genuine enquiries for all the brands and orders placed included a Kuhn Oceanis sprayer, Cherry Products loader attachments and Cousins cultivation equipment.

“Our latest brand, Kioti, also attracted interest and having the first public showing of the Kuhn Aurock drill was a bonus,” he added.

“Overall we’re having a good year. Our main Case IH range is in strong demand and particular interest in Puma and Optum models was also noted at the open day. MacDon combine headers were displayed for the first time although we sold one last harvest and the customer was so impressed with the added performance that he ordered another for his new Axial Flow combine which we displayed at the event. The latest 50-series Axial Flows feature HarvestCommand which includes automation to help users get best performance from the machines and we have a long list of requests already for demonstrations this harvest.”

Special offers on parts and groundcare equipment meant those departments were also busy.

“The day was a real success and I’m delighted for our sales and service teams as well as the supplier representatives who put so much effort into the event. We will all be busy following up enquiries and requests for quotes and look forward to another busy year. I’d like to thank all of our customers who attended. It was great to see everyone and we really do appreciate their support.” 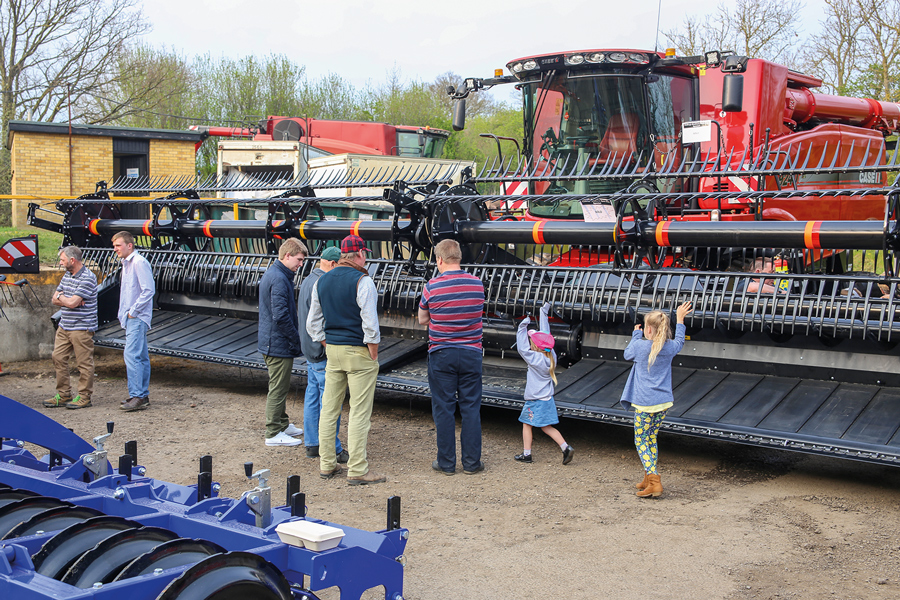 A 41ft MacDon header fitted to an Axial Flow 9240 combine received lots of attention. The combination carried a sold label having been bought by a farmer near to the dealer’s Brigstock depot.

Richard Western trailers are popular in the trading area and the manufacturer’s sales director Mike Murray said 16 and 18t versions account for more than half the sales volume by Collings Brothers.

“We promote regular trailer brake testing which can highlight deficiencies and improve safety and this dealer offers an excellent on-farm service,” commented Mike. “Campaigns to highlight agricultural trailer safety have been successful and we are definitely seeing increased awareness around braking performance when new trailers are purchased.”

“We offer the Bagma testing service,” explained Collings Brothers service manager Steve Lines. “It’s just £100 per trailer and we come to the farm to do it. The customer just has to load the trailer to its rated capacity and also weigh the tractor it’s hitched to, and we can then carry out a full inspection and test the braking performance. It doesn’t take long and many customers use our service every year for peace of mind. There is still time to have individual or fleets of trailers tested before this harvest and those interested should contact us for further information.”

Mike (left) is pictured with Steve and a Richard Western trailer at the event. 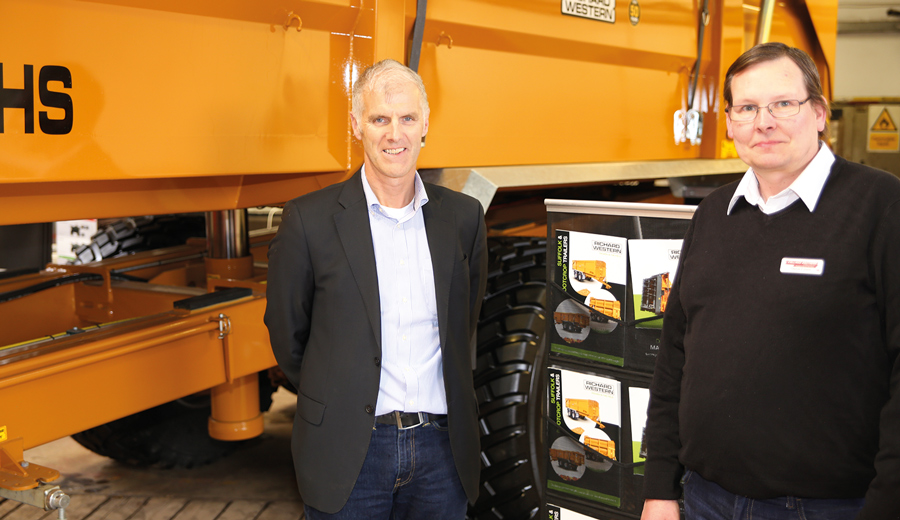 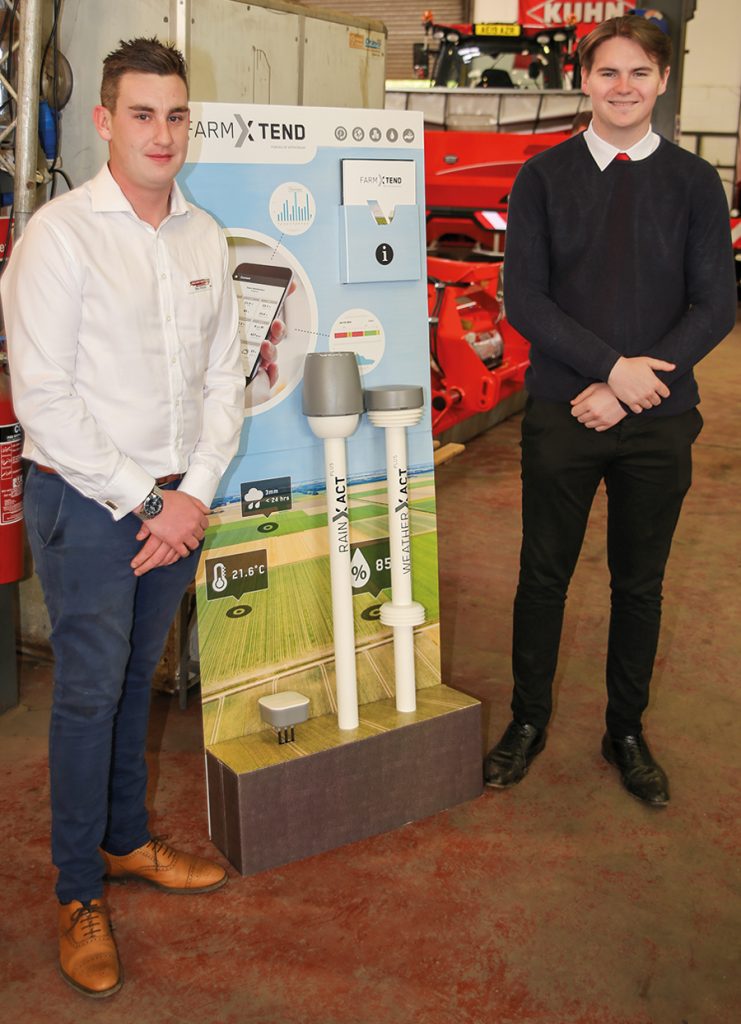 New products displayed from Case IH for the first time at a dealer event included weather and soil condition monitoring equipment as part of the company’s precision farming package. The FarmXtend display included RainXact rain and precipitation sensors accurate to within 1mm, SoilXact Plus which monitors soil moisture and temperature and WeatherXact Plus which measures air temperature and humidity.

Users can install multiple monitoring stations around the farm with data available through a smartphone app. Upgrades include DiseaseXpert to forecast disease risk for individual crops and varieties, based on current weather conditions. SprayXpert can advise chemical efficacy depending on temperature and humidity. Data can be transferred on narrow band-width across most of the UK or by 2G mobile network and battery life within each sensor is up to five years. WeatherXact is priced at £760, RainXact costs £611 and Soil Xact Plus is £480 and all products are available through the local main dealer. Pictured with the FarmXtend display are Collings Brothers Ben Wood (left) with CNH precision farming intern Nick Stapleton.

The new 6m Kuhn drill had been borrowed back from its owner who purchased it from Collings Brothers having used a prototype version since autumn 2017. The universal drill is designed for zero-tillage crop establishment but can also be set up for varying degrees of soil movement to suit soil condition and the farm’s drilling policy. The 5,000-litre hopper is available for single or dual products and dual metering allows different rates to be selected for each. New VistaFlow seed distributors allow individual rows to be switched from the cab of Isobus-equipped tractors making the drill compatible with any tramline configuration. The drill chassis is articulated so that during turns the drilling coulters precisely follow the opener discs. An integrated crop roller mounted in front is an option with pressure adjustable on the move allowing the operator to crimp rather than chop cover crops.

The drill displayed had a full width central tyre packer which is recommended for zero-tillage, levelling and consolidating loose or cultivated ground.

“Having seen the drill working I’m very impressed and looking forward to having it in full production,” explained Kuhn non-inversion establishment specialist Will Waterer. “It replaces the SD drill which we offered until three years ago and we expect considerable interest at Cereals in June where it will have its official UK launch.” 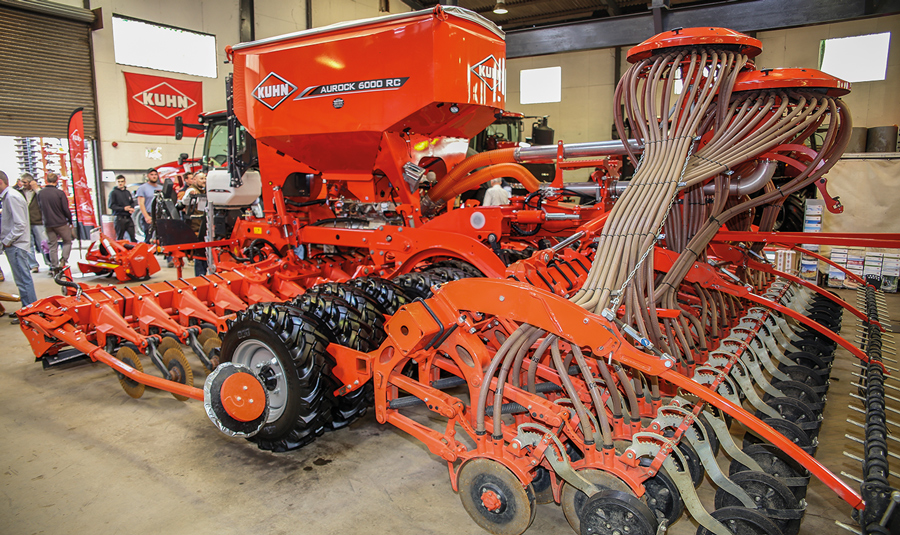 Fit for the future

The Kuhn Aurock drill’s purchaser was at the event and, talking to Farmers Guide, he explained its benefits.

Trading as JT Lines & Son and based at Eltisley, Cambs, Martin Lines farms a mix of owned, rented and contract-farmed land totalling approximately 540ha. Most is heavy and although Martin is keen to move toward minimum and zero-tillage for all cropping where possible, fields taken on more recently need time to adjust from a full inversion tillage regime. “Our focus is on reducing costs and inputs while improving soil health,” he explained. “A few years ago we were losing the battle against black-grass and although we used stale seedbeds in the autumn, when we disturbed the ground again during drilling; the black-grass quickly returned and many crops became unprofitable.”

Cover and companion crops are used to maintain ground cover and, where the land is zero-tilled although some areas receive pre-emergence herbicides, others don’t require any chemical now for weed control. “When Kuhn asked if I would be interesting in trying the prototype in 2017 I was enthusiastic – especially having been involved previously testing the first Performer cultivator in the UK so I knew the company and the care that goes into designing and building its products. They are strong and robust and back-up from the dealer and manufacturer are good.”

Martin explained that individual adjustment of the various elements means the drill can be set-up for all soil conditions and seed types. “We have used the drill in all situations from full cultivations to direct and zero-till drilling, mainly in challenging heavy soils. With individual coulter adjustment we can plant main and companion crops at different depths and separate adjustment of the crimp roller on the front allows us to leave a mat of cover crop to hold moisture and maintain ground cover. We have compared the crimp roller with chemical desiccation ahead of drilling, and the preserved moisture through crimping has resulted in higher yields. This has encouraged us to look at alternative crops such as soya which we aim to grow next year. We will drill it into a cover crop of rye, crimped by the drill roller and are hopeful this will increase moisture availability for the soya.”

Crops planted so far include wheat, winter beans, spring barley, oilseed rape, cover crop mixes and millet and results during testing were so good that Martin didn’t hesitate to order the first production machine. “It’s excellent and my eyes have been opened as to what might be possible,” he added. “We are keen to take on more land and keeping costs down is just as important as high yields. The drill has saved us 77,000 litres of diesel so far with no loss of harvested tonnage.”

Martin is replacing a Case IH Quadtrac with a 300hp Optum plus another smaller wheeled tractor. The Optum will be used for any cultivations needed and to pull the drill and is equiped with on-board tyre inflation providing instant pressure adjustment for transport and field tasks. “We pulled the prototype and our own drill using a Puma 215 but the Optum will give us power in reserve, allowing us to use lower engine revs and save fuel,” he added. 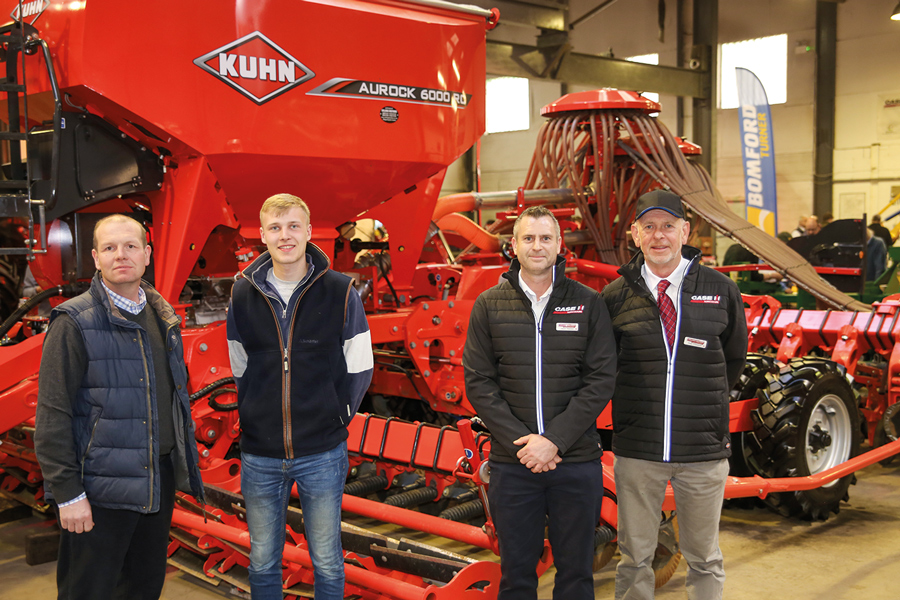 Bomford area sales manager for the south and east Graham Cooper is pictured with one of his company’s popular side arm mowers at the event. “The dealer’s sales of side arm mowers, flail and rotary toppers have been mainly to farmers this year so far but contractors have also been updating their machines. It’s a good sales and service team here and they are out and about on farms in the region making it easy for customers to do business with them.” 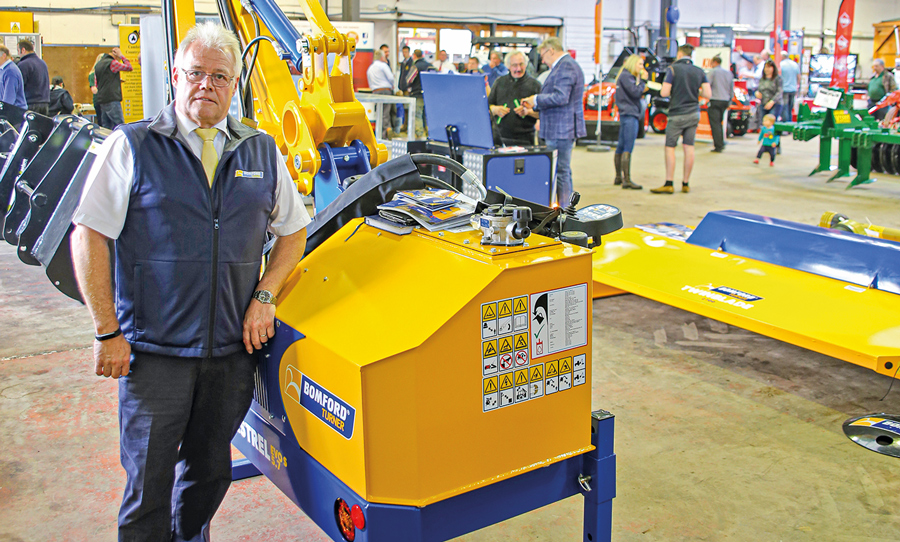 Customers made the most of the Martin Lishman moisture meter grain clinic. “Collings Brothers open day is always a good event for us,” said national sales manager Joel Capper. “As a rule modern machines tend to be more accurate but a lot depends on quality and price. You get what you pay for and while they are almost all accurate when new, cheaper brands have to be replaced after just a few years but we often have older premium brands brought in which remain accurate after several decades’ use. One at this open day was still performing well and it’s 40 years old.” 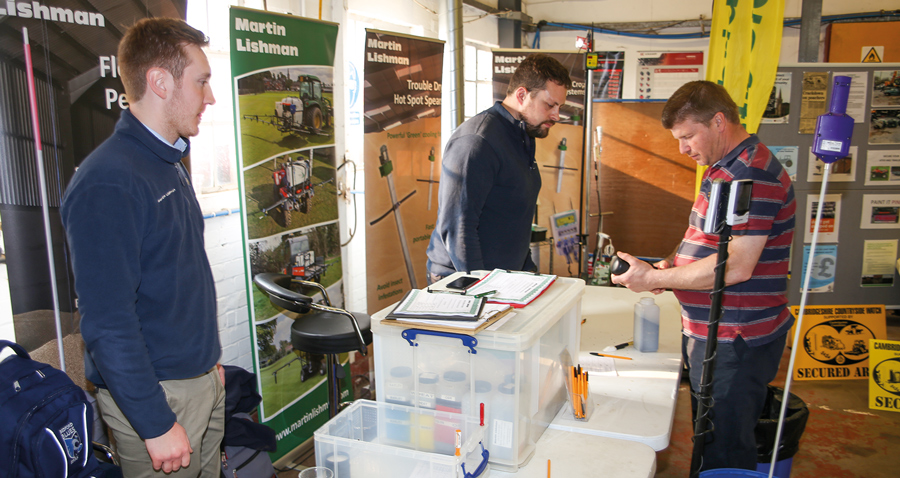