Skipton Auction Mart’s latest Craven Dairy Auction (12th April) was the most successful of the year to date, with more buyers present for stock of all classes and ages. 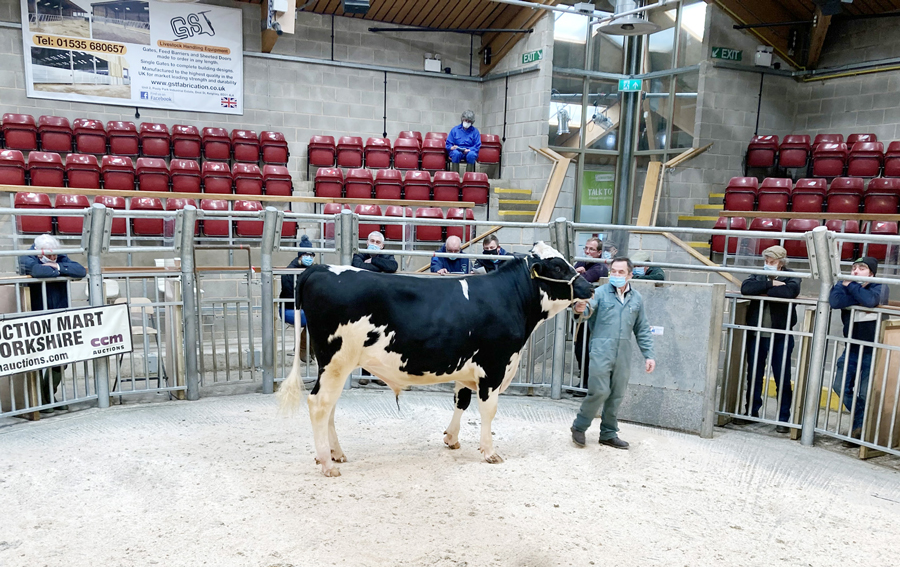 The sale commenced with eight top-notch fresh milkers through the ring, seven breaking the £2,000 barrier. Two shared the day’s top price accolade of £2,350, the first from HS Petch & Sons, Whitegate Farm, Great Ayton, with a Mogul-sired heifer from their Mandy family selling to Brian Blezzard, Ribchester. Fresh since March 23 she was giving over 27kg/day.

At the same money from Mick Blackwell, Gargrave, was a Silverridge V Extreme daughter three weeks calved giving 34kg/day and one of two purchases by Alan Middleton, of the Hartley farming partneship at nearby Beamsley.

A 44kg fresh second calved black cow from John Thompson, Butterknowle, Durham, made £2,250, heading in a trailer of three to Mark Goodall, Tong, who also selected a Alfalfa-sired heifer from GB Corner and Sons, Brompton, Northallerton for his load. Harlsey Spectre Unique, from Peter and Rob Corner, also made a favourable £2,200, as the milking trade was strong for the first-class milking stock. Sally Wellock, Oakworth, as always provided a milky correct heifer who also hit the £2,000 mark.

Aireburn Triton, a December 2019-born bull from Brian and Judith Moorhouse, Bell Busk, was keenly sought and this well put together working age bull from a 60kg per day dam now in her 6th lactation heads to Flasby Estates at £2,100.  It was bred from the Trifolium family that originated at Aireburn and then went to Johnathan Sharp, Oakworth, to his Tewitthall herd, before the Moorhouse’s purchased the bull’s EX93-3E 6* Shottle granddam who gave over 60 tonnes lifetime to re-establish the family at Aireburn.

The real numbers were in the youngstock, where 12 buyers were recorded over the 36 lots forward. Buyers preferred the well grown heifers with strength and a consignment of crossbred recently served heifers topped the averages for first time vendors, Ian and Phil Carlisle, from Constable Burton, Leyburn ,with the five averaging £1,110 and topping at £1,180 to familiar faces from Calderdale, the Midgleys of Luddendenfoot.

A surplus from their 400-cow grass-based high fertility and high health herd, these well-conditioned heifers had run with an Angus bull for the last month and the five all sold between £1,000 and £1,180. 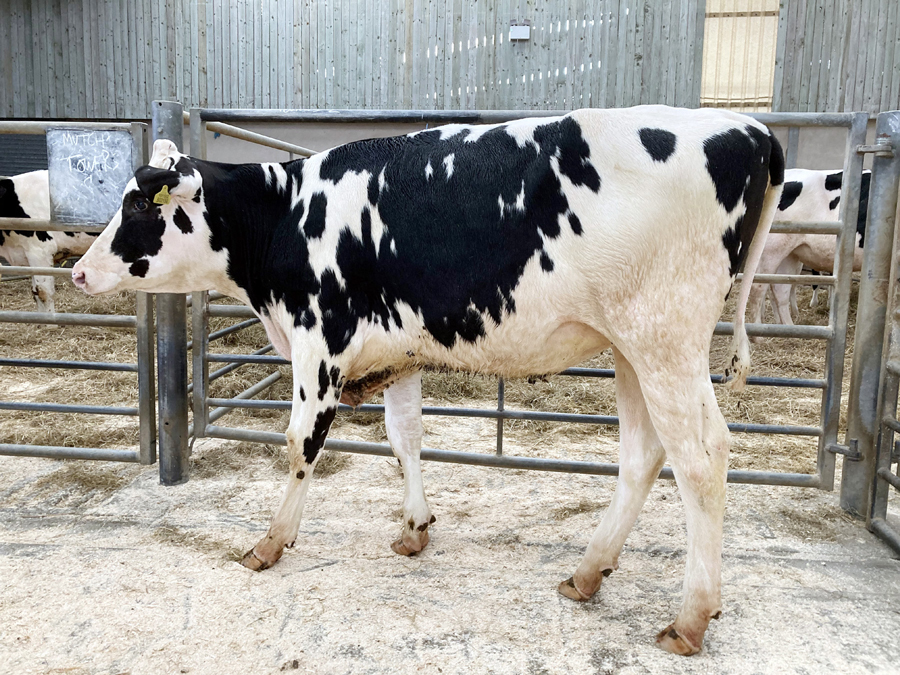 The pick of Messrs Brough’s heifers from the Tallent herd in Cumbria was Tallent Samaritan Gail, a potential 3rd generation VG or EX who made £1,220 and headed with Tallent Artist Belle at £1,180 back north to Cumbria to Smallthwaite Farms Ltd. Anthony Brough uses predominantly sexed Holstein semen on his 100-cow pedigree herd, which has some of the best and most consistent pedigrees in the UK today.

Batches of approaching bulling age heifers from John Thompson’s Softley pedigree herd in Durham and Pete Baul’s Ravensgate herd at Bishop Thornton, Harrogate, were appreciated for the longevity and high performance of their family line, and with both being regular vendors at CCM buyers know the type of stock they develop.

With six and seven heifers forward respectively they both had individuals over £900, although a late Spring and lack of grass made buyers cautious. Messrs Waring, from Cherry Burton, also sold eight heifers, a touch younger than some of the other consignments, with this batch peaking at £900 for Winton Lighthouse Trixie, a January 2020 heifer who was one of five selected by Richard Close, Kettlewell. 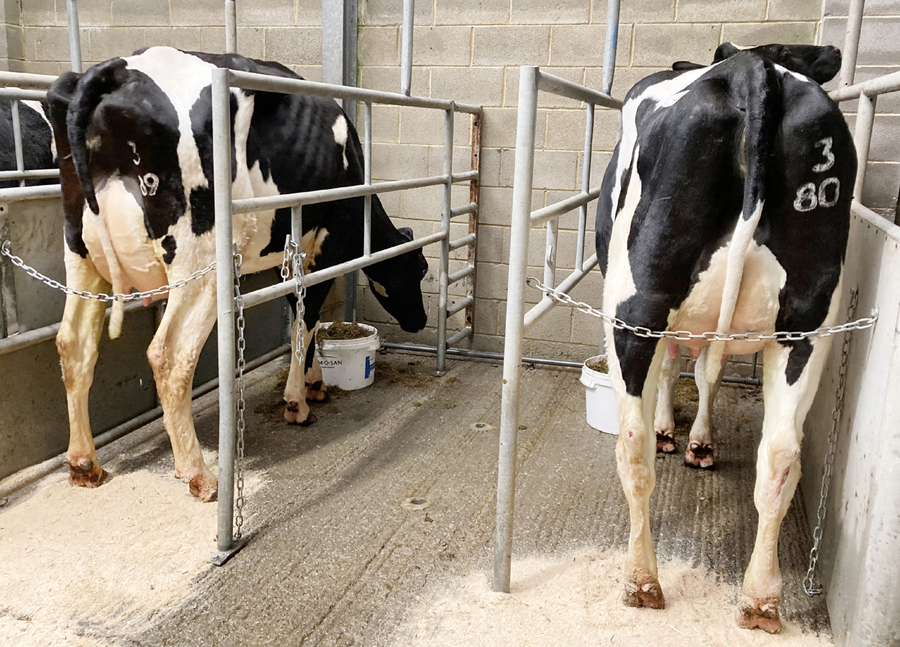 Pair of fresh heifers from Messrs Petch that averaged £2250

Spring Jersey sale next up

Plans are now being made for the next fortnightly Craven Dairy Auction on Monday, April 26th, which includes the Spring Jersey sale, when Mark Davis, of Kivell, will again join CCM in the rostrum for the sale of some 40 pedigree and non-pedigree females entered, with catalogues due out this week.

On offer will be in calf, bulling age and youngstock and some Jersey semen. Vendors from last year’s highly successful sale (a new centre top price of £5,500 was set for dairy at CCM Skipton when Cherryview Legal M Lacey from Judith Waring sold) return, such as John and Sue Heath from Ravenfield Jerseys, and David Jones from Ormskirk.

They are joined by a batch of 10 from Brenda Leddy, Kelso, a batch of 8 yearling heifers from the high producing robot milked herd of the Clears at Pierrepont and Discovery in Surrey, who will share a wagon with five milkers from the well renowned Bluegrass herd of the Daw’s in Hertfordshire – who are bringing five milkers including a milking heifer from their Jane family, already a VG87-2yrs old with unlimited potential.  Online bidding again available for those who can’t travel to the sale.