A UK manufacturer of vegetable harvesting and handling machinery has supplied its first to order to South Africa thanks to a recommendation from a Canadian company. 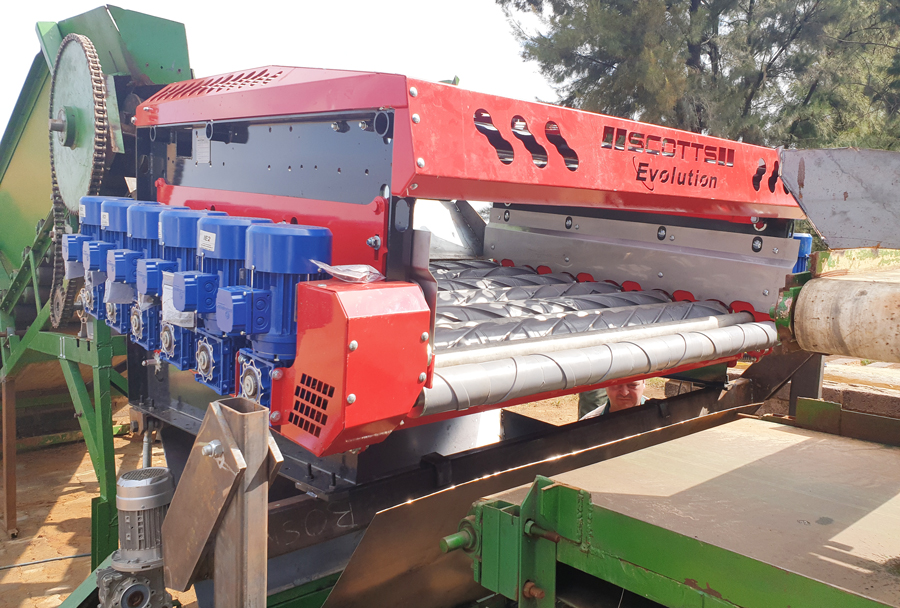 A UK manufacturer of vegetable harvesting and handling machinery has supplied its first to order to South Africa thanks to a recommendation from a Canadian company.

Scotts Precision Manufacturing has sent one of its Evolution separators to Bestbier South Africa after Allan Equipment in Canada recommended the unique machine.

Designed in Boston, Lincolnshire, the Evolution gently separates vegetables from soil and clod and haulm.

The machine that is heading to South Africa will be used by Louis Classen, who farms 200 acres of potatoes in Hartswater in South Africa’s Northern Cape.

Louis purchased the machine from Gouws Prinsloo, Sales Manager for Bestbier South Africa. The Canadian connection comes from Gouws’ brother in law, Danie van Schalkwyk, who is part owner of Allan Equipment in Canada, another of Scott’s customers.

“It really is a small world,” says Derek Scott, managing director of Scotts Precision Manufacturing. “We have been supplying our Evolution separator to Allan Equipment for several years, and it is very popular over there due to the excellent way in which it handles heavy soils. It was very surprising though to get a call from Gouws and to find out that he was involved in farming in South Africa. We’ve sent Evolutions around the globe. They’re in use in France, the United States and Australia, but this is the first time we’ve sent one to South Africa. Hopefully, it will be the first of many as awareness of the Evolution’s capabilities grows.”

Scotts introduced the Evolution 2005 and has since sold over 650 of the separators. The Evolution gently separates clod, stones, haulm and loose soil from a wide range of vegetables, fruit and alliums, including potatoes, gourmet potatoes, sweet potatoes, carrots, onions and bell peppers amongst others.

“My brother in law has been very impressed with the Evolution and says there’s nothing else like it,” says Gouws. “When we were approached by Louis, who said he was struggling to remove the soil from his crop, the Evolution immediately came to mind. I contacted Danie, who put me in touch with Scotts Precision Manufacturing. Derek was really helpful and has designed a bespoke machine for Louis, which is now in use and doing a great job.”

At the heart of the Evolution is the patented roller design. The two contract rotating rollers work together to gently move the crop across the separator. The movement of the rollers loosens the dirt, which is worked into a valley, where, if soft enough, the debris is crushed and ejected down below the separator.

The latest version of the Evolution features maintenance-free direct-drive motor and gearbox units on each extracting shaft.

A new generation of Polyurethane spiral roller has been developed and integrated into the system. This latest design features large air chambers and a “foam pocket” section that improves the grip on root clusters to reduce blockages.

Protection to the lips from potential stone damage is maintained with the benefit of improved self-cleaning. Instead of the standard main crop spiral rollers with a 10mm tread pattern, less aggressive spiral rollers with a 6mm tread pattern are now an option. The 6mm tread is designed for customers looking to clean small potatoes or where high volumes of haulm and/or leafy material is an issue. The 10mm option continues to be the best option for farmers faced with significant clod problems.

The 1.5m wide Evolution in use at Louis’ farm features six rollers with electric drive.