The Scott brothers, Charlie, Michael and Andrew, have a strong passion for continuing their family’s arable farm but they soon realised they needed to diversify to strengthen the business. This led to their latest venture – poultry 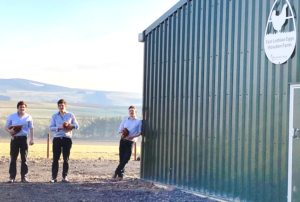 Growing up on their family’s East Lothian farm, the brothers had a hands-on role helping their father on the arable unit, supplying wheat, barley and oilseed rape. Charlie and Michael both studied Agriculture at Edinburgh SAC, while Andrew studied forest management at Inverness.

On his return in 2016, Charlie built the first 16,000-bird free range unit, fitted with Vencomatic UK equipment– and after its great success, later doubled the size to 32,000 birds the following flock. Andrew Scott is now involved in the build of a new poultry shed.

Michael commented: “The first shed we built was a massive challenge and, with little experience, there were many learning curves along the way.”

With three sheds, and a brother for each, their roles entail managing their individual sites. Reduced labour and reliability are at the forefront of their decision making, and they have installed a Veranda Aviary and Veranda Gallery Single to reflect this.

Explaining the decision to stay with Vencomatic UK for all three sheds, they said: “The support we get from Vencomatic UK is second to none. The equipment is good quality which also lowers labour requirements on site which is very important to us. The Fortica ventilation system has also worked very well with our biomass boiler and ground source heat pump. This has made a great difference to air quality, litter and humidity levels within the sheds.

”To further ensure that their equipment will last for future generations, they found that the Magnelis galvanised steel used on the system was a big benefit. “What you pay for is what you get. Everyone has their own opinion, but I would rather invest in a system that is good value and going to potentially last longer, require reduced labour to run and have less problems along the way.”

In addition to their nest system, the brothers installed efficient egg packing equipment. They found the best solution for them was with Prinzen, and opted for the PSCPC 30, PR70 and Prinzen Palletiser (new for 2021) for the reliability and support.

“We rarely have any problems with our farm packers and if we do, an engineer can be on site within 24 hours,” they reckon.

Looking to the future, as part of their commitment to net zero targets, the brothers have committed to a 200kW roof-mounted solar install, with Venco Energy, in an attempt to become more carbon neutral and lower electric consumption from the national grid.

Opportunities to set up a distillery or microbrewery