Participation in an annual nationwide survey of farmland birds has more than doubled. Britain’s farmers and gamekeepers have shown their long-term commitment to conservation alongside productive land-use by completing this year’s GWCT Big Farmland Bird Count in record numbers. 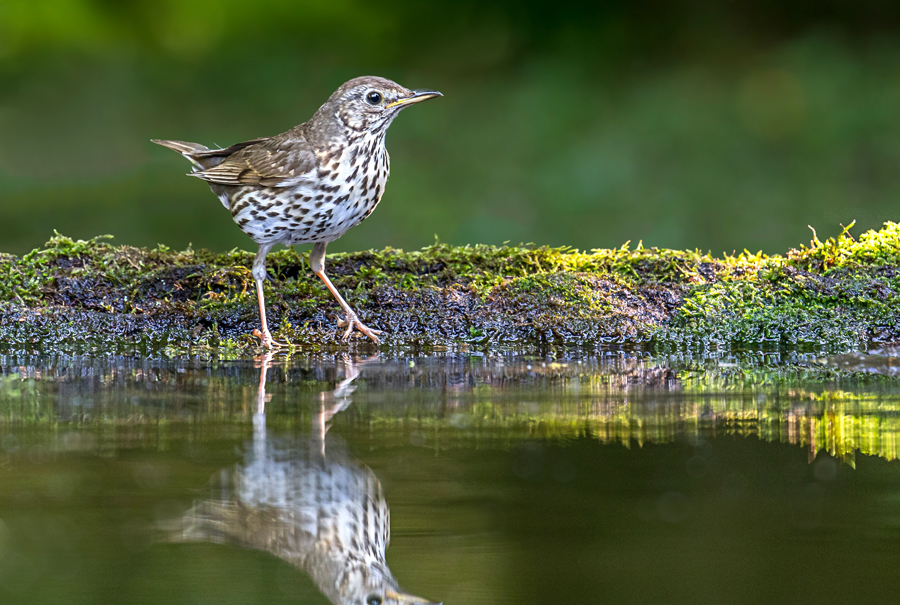 The Game & Wildlife Conservation Trust’s Dr Roger Draycott, who organised the count, said “We could not be more delighted with the response to this year’s GWCT Big Farmland Bird Count. Despite much of the country being blanketed in snow during the count (5th-21st February) participation has shot up, with 2,500 counts returned, representing a 65% increase in the number of counts submitted compared to 2020, which was also a record year. The land area covered by the count has more than doubled to over a million hectares and 81% more birds have been counted this year by more than 700 additional volunteers.

“All of this helps us to build a detailed national picture of the state of Britain’s farmland birds, allowing us to better understand what is really going on in our countryside. It clearly shows that farmers, land managers and gamekeepers care for the land they work and, given that they look after 71% of all the land in the UK, that is extremely good news for the future of our treasured bird species.

“We would like to thank everyone who took part for demonstrating that land managers can lead the way in protecting our countryside alongside effective food production.”

The 2021 GWCT Big Farmland Bird Count has shown some encouraging results. A total of 25 species from the Red List for Birds of Conservation Concern were recorded in this year’s count, with 8 appearing in the 25 most frequently seen species list. Of these, Starlings, Fieldfare, Lapwing and Linnet were the four most abundant red-listed species recorded, with over 112,000 spotted in total, which equates to 22% of all the birds counted.

The five most abundant birds counted were woodpigeons, starling, rooks, fieldfare and chaffinch. A total of 190,000 were seen, making up over 37% of the total number of birds recorded.

The GWCT Big Farmland Bird Count asks land managers to spend 30 minutes recording the bird species they see on their land as part of an annual nationwide survey which helps to identify any species which are struggling. The count is a simple way for farmers and gamekeepers to assess the natural capital on farm, an increasing requirement under the government’s Environmental Land Management scheme, and to chart the effects of any conservation they carry out. Completing it year after year can help to establish the bio-diversity gains from long-term conservation efforts. The scheme was launched in 2014 to highlight the positive work done by farmers and gamekeepers in helping to reverse the decline in farmland birds. 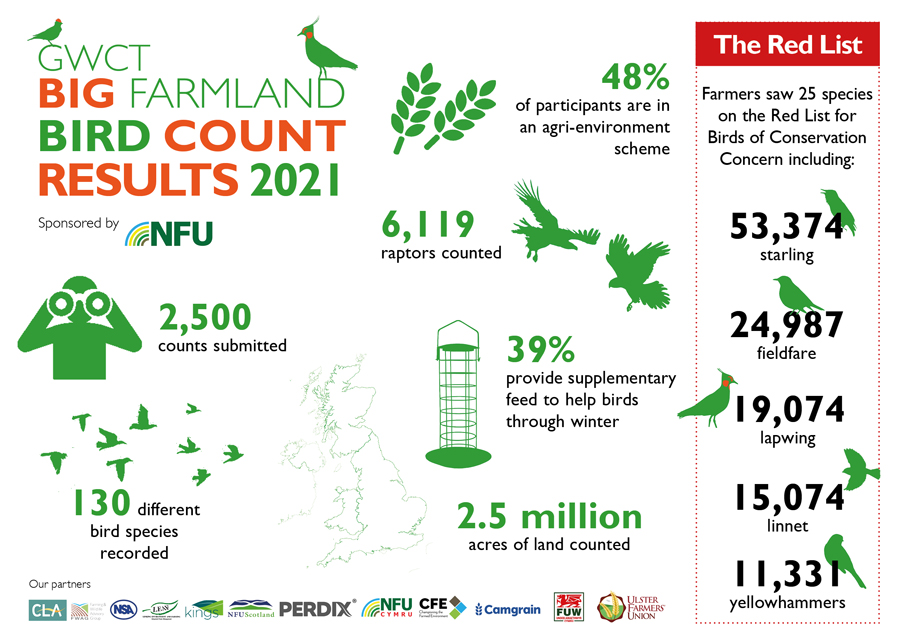 The National Farmers’ Union (NFU) has sponsored the count for the last three years.

NFU President Minette Batters said: “These results are tremendous and I would like to thank all those farmers who responded to this year’s count in record numbers despite the wintry weather back in February. It’s great too that so many different threatened species were spotted such as Lapwing and Linnet.

“British farmers are proud to produce your food and it is often unappreciated that they also provide habitats for wildlife and additional feeding for farmland birds during the winter months. The Big Farmland Bird Count is always a fantastic way for farmers to record the birdlife found on their farms and why I am really pleased that the NFU could sponsor this year’s count once again.”

Land managers from around the UK took part in the 2021 count. Surveys were undertaken in every county of England and across much of Scotland, Northern Ireland and Wales, with Norfolk topping the leader board with 189 submissions and Lincolnshire in second place with 131. Participation rates increased in England, Wales and Scotland. Word of the scheme had also spread beyond the UK’s shores, with surveys coming in from a number of farmers in Austria.

The average farm size of those taking part was 1,027 acres. 48% of participants were in agri-environment schemes, demonstrating their long-term commitment to environmental management. 39% provide some form of extra support for birds, through growing bird seed mixes or by winter feeding.

The GWCT would like to thank the NFU for sponsoring the GWCT Big Farmland Bird Count, which it delivered in partnership with the CLA, FUW (Farmers Union of Wales), Ulster Farmers’ Union (UFU), Kings, CFE, the FWAG Association, National Sheep Association, Camgrain and LEAF.

Tune-in on the Tramlines