It may have been eclipsed by cabbage stem flea beetle concerns of late, but minimising the significant threat posed by verticillium alongside phoma and light leaf spot remains very much on the agenda for those keen to improve the reliability of UK oilseed rape production. 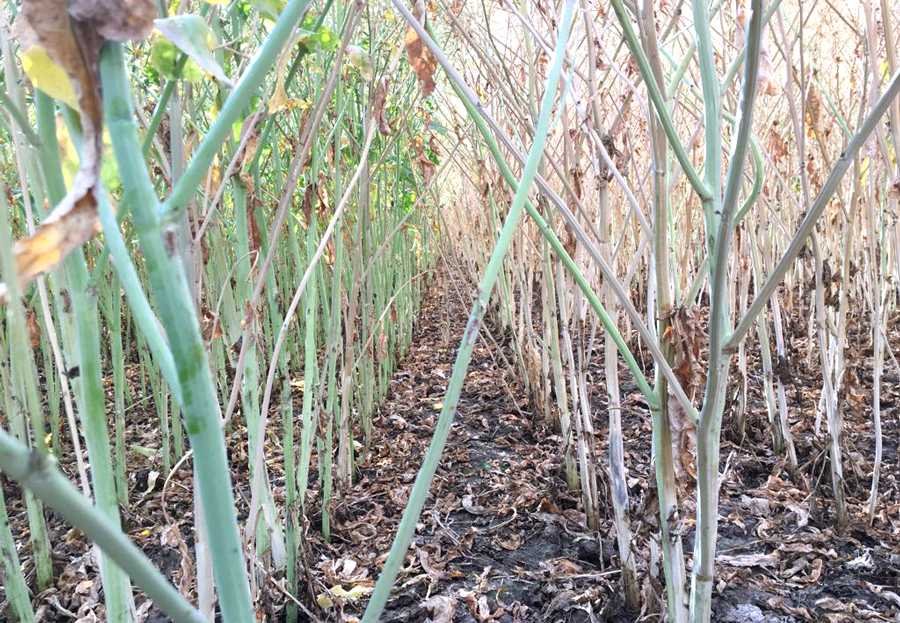 Building on substantial AHDB-supported research led by NIAB with ADAS showing highly consistent differences in varietal resistance to the disease, the first Recommended List verticillium stem stripe trials will be going into the ground this autumn in the hope that resistance ratings can be added to the RL at the end of 2023.

“Working jointly with the breeders, our trials will involve all existing RL varieties and candidates,” explains Recommended Lists manager, Dr Paul Gosling. “Providing we get good enough results we shall be categorising varieties as high, medium or low resistance to help growers with the best defence they have against verticillium losses.”

Defra monitoring reveals an average of 14% of UK crops were affected by the disease last season, rising to 30% in the worst-affected South East region.  This compares with 5% nationally in 2019. However, as many infections only become apparent after the June surveying on which these figures are based, they are almost certainly an under-estimate.

Losses are generally reckoned to be up to 25% but, like incidence, they vary widely between  seasons and farms.

At the forefront of UK verticillium research, ADAS plant pathologist, Dr Faye Ritchie stresses that the impact of the disease is invariably highest in crops stressed by pressures like summer drought; mainly because the damage infections causes to stems restricts water and nutrient uptake, promoting early senescence.

“The Oilseeds YEN underlines how important the length of the seed fill period is to performance,” she points out. “Thankfully, we seldom encounter the complete canopy collapse the disease can cause in other parts of Europe. But in challenging years we’ve seen yield differences of as much as 0.8 t/ha between the most susceptible and resistant varieties in our trials.

“With OSR profitability on a knife-edge for many these days, the future of the crop as our best cereal break depends on minimising every risk we can. Under these circumstances good verticillium resistance is clearly well worth having.” 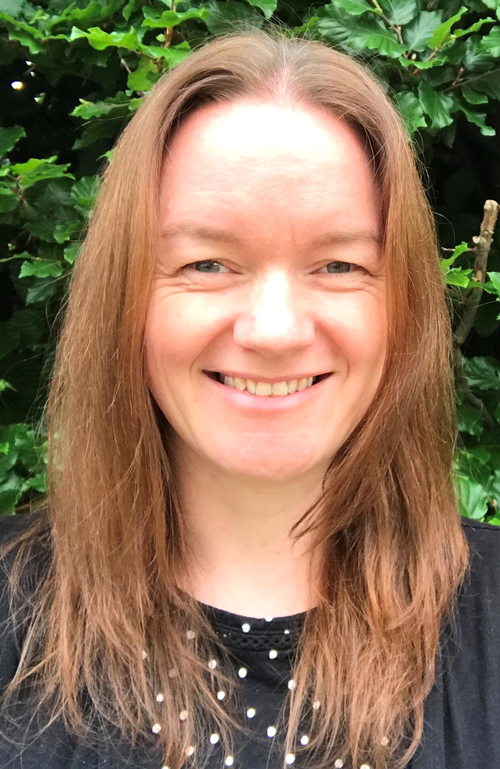 This is particularly important as there aren’t any real alternatives for combatting the disease. Like OSR’s other main soil-borne threat – clubroot – there is no registered chemistry to call on.  And, while short rotations have definitely built-up infection levels, Verticillium longisporum can survive in the soil for a good 10 years. So, extending rotations once it is present does not offer a solution.

Avoiding farm-saving seed is clearly a wise precaution wherever the disease is known to be a problem. Equally, regimes that produce thick-stemmed, well-branched plants and strong crops can help reduce the impact of infections.

Studies in Germany suggest reduced tillage may play into the hands of the disease more than ploughing, while extending the growing season by early drilling can substantially increase both disease incidence and inoculum levels in the soil. There is, however, limited evidence that delaying drilling could be useful for control in the UK.

“Varietal resistance stands out as the best way of managing verticillium,” insists Dr Ritchie. “Significant variation in disease symptoms among commercially grown varieties has been recognised for almost 10 years now. And the work we did alongside NIAB with up to 50 Recommended List and Candidate varieties a year in a four-year AHDB-funded project from 2015 not only showed highly significant differences between them but very consistent ones between sites and seasons. What’s more, the pathogen appears to be very stable with no evidence of resistance breakdown to date.

“The AHDB project’s combination of inoculated and naturally-infected trials showed that no varieties were immune to the disease,” she points out. “However, there was a wide spread of symptom expression, with Catana standing out as notably resistant at one end of our verticillium index scale and Quartz and Harper especially susceptible at the other.

“The inoculated versus uninoculated trials on four sites showed resistant varieties losing little, if any, yield to the disease in contrast to noticeable losses recorded among the most susceptible. Interestingly too, we also saw clear evidence of tolerance to the disease in the hybrid, DK Extrovert which suffered very little in performance despite a relatively high verticillium index.”

In parallel to the AHDB project, the field trials ADAS have run for the past 10 seasons on ground with a history of verticillium – and their year-round glasshouse screening facility at Boxworth – continue to provide up-to-date intelligence on varietal resistance.

“We field test around 25 varieties a year for oilseed rape breeders against controls we are confident represent the extremes of resistance and susceptibility as well as a moderately resistant middle ground,” she explains.

“Although we still see a broad range of verticillium indices, this is considerably narrower than it used to be. At the same time, even the most affected varieties seem to be standing-up noticeably better to the disease than in the past.”

The progress made in modern breeding is clear in the performance of the nine up-and-coming varieties Dekalb trials manager, Richard Phillips entered into the 2020 ADAS trials.

Of these none had a verticillium incidence or severity score anywhere near that of the susceptible control; four were on a par with the resistant benchmark; and one proved as good as the moderately resistant control while out-yielding the resistant standard.

“So ADAS consider them to have high levels of resistance. Importantly too, they yielded 0.7- 0.9 t/ha more than the standard susceptible variety.

“With an index similar to the moderately resistant control, DK Exstar also showed itself to have good resistance to verticillium alongside it’s class leading ratings of 8 for both phoma and light leaf spot resistance. Under these circumstances, it wasn’t surprising that the variety topped its cohort with a yield of 0.15t/ha ahead of the resistant standard and fully 1.1t/ha up on the susceptible one. 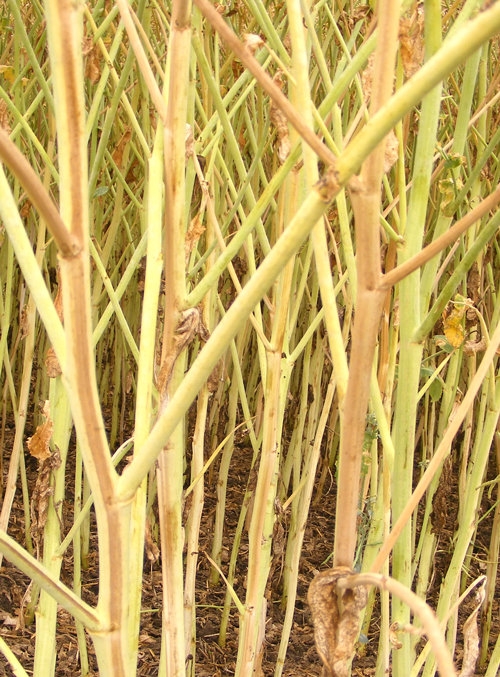 “This underlines the importance of marrying verticillium resistance with the best balance of other yield-protecting traits for the greatest performance reliability.  Strong resistance to phoma and light leaf spot are essentials in this respect, as are rates of autumn and spring development that give varieties the best tolerance to disease, pest and weather challenges.

“With ADAS recording levels of pre-mature pod ripening of between 30% and 40% in even the most verticillium-resistant varieties, the extra tolerance that the pod shatter resistance  all Dekalb hybrids carry also comes into its own once again here.”

“It’s really good to find eight of 20 mainstream varieties in this trial scoring more than 7.0,” says Agrii seed technical specialist, David Leaper. Amongst the best performers, DK Exsteel stood out with a similar symptom score to the moderately resistant standard used by ADAS in their work.

“It’s no co-incidence either that this variety was also one of the five top performers across our four trial sites last season.  Nor that it has come out at or near the top in every one of our annual trial series since 2017. Over this time it has been noticeably more consistent than any other variety.”

Mr Leaper sees verticillium as a major factor in the inconsistency of OSR performance. On some sites in some seasons he has seen some varieties devastated by infections. To such an extent that, however promising, he has decided not to support them.

“More than anything else, consistently good performance is what we have to have in oilseed rape today,” he insists. “For which all round varietal strength is essential.  After all, it’s absolutely no good getting our crops through the challenge of flea beetle for them to succumb to verticillium.

“I certainly wouldn’t want to sacrifice strong phoma and light leaf spot resistance for it, but there’s quite enough choice in modern varieties to have good verticillium resistance as well. Add the sort of growth habit that helps crops recover from setbacks and pod shatter resistance to mitigate the effects of any early senescence and you have the sort of varietal resilience we really need.”