Mitsubishi has added a new Shogun Sport to its 4×4 line-up, providing an additional option for those needing a practical on-and off-road towing vehicle which can also carry passengers in comfort. Our machinery editor David Williams tried it out. 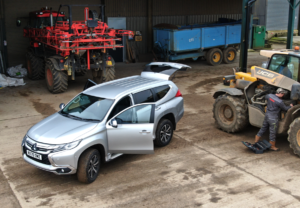 Farmers Guide tested Mitsubishi’s latest Shogun Sport with seven seats and the ability to tow up to 3,100kg.

Mitsubishi’s previous Shogun was discontinued in the UK in 2019 after a 37-year run. Popular with farmers for its reliability and off-road capability, it was also reasonably priced and comfortable. The new Shogun Sport is slightly smaller, but as the company’s new flagship SUV it gains extra features and comfort.

There are three versions all sharing the same engine and transmission including a Commercial with a completely flat rear load area and only two seats, plus two passenger models with 7-seat accommodation. All have the same 3.1t towing capacity. According to Mitsubishi – the maximum load volume is 1,488 litres with the second and third row seats folded flat, so as a dual-purpose farm vehicle the new Shogun Sport boasts great practicality. The Shogun Sport ‘3’ and ‘4’ passenger versions are broadly similar but additional features on the ‘4’ make it worth paying the extra.

The 2.4-litre diesel engine drives through an eight-speed automatic gearbox. With 181hp, and 430Nm of torque at 2,500rpm; performance on- and off-road is good and there is plenty of power to accelerate up to the legal limit and for overtaking. The gearbox shifts smoothly in automatic mode but it can also be controlled manually using paddles behind the steering wheel or by pushing the main gear lever to the left and then forward and back to select the ratios. Official combined fuel consumption is 32.8mpg but a 400-mile round trip during the test week which was mainly on motorways but also included 60 miles of secondary roads and some steep slopes resulted in a more impressive 38.0mpg.

The Super Select 2, 4wd system modes are selected by a rotary dial on the centre console. Modes include 2wd; 4wd high range; and 4wd low range with the centre differential locked. A separate button locks the rear differential for maximum traction. The Shogun Sport has an impressive 218mm of ground clearance and is more capable than most other SUVs off-road, including a 700mm wading depth. Hill descent control can also be engaged and hill-hold is also standard, preventing the vehicle from rolling back when it comes to a stop on a slope. The handbrake is electric and applied by a small switch near the gear selector, but surprisingly it doesn’t engage or disengage automatically. The suspension performs well and ride quality is good. Manoeuvrability is impressive for a large 4×4. 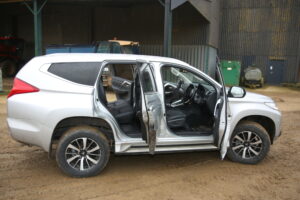 Access to the three rows of seats is good through wide opening doors.

The interior is well designed and both front seats are electrically operated with plenty of adjustment. For a tall driver there is adequate leg room, although the large centre console restricts knee space to the left.

The second row of seats is reasonably comfortable despite their ability to fold almost flat to accommodate large boot loads and they also recline. The third-row seats appear small but are suitable for adults and are generally more practical and comfortable than in many competitor vehicles. There is a surprisingly large amount of leg and knee room, although the hunched seating position would become tiring on longer journeys. Access to the third row is by folding the second-row seats and then tipping them forward, which is relatively easy once the procedure becomes familiar.

Only the outer two middle-row seats have Isofix fittings.

Easy to live with

Visibility is excellent, including through the large external rear-view mirrors. The reversing camera image on the centre display is clearer than on most competitor vehicles, and despite rain and muddy roads being an issue throughout the test week the camera remained clean. For a modern vehicle the engine sounds quite ‘agricultural’ when idling, but as speed increases it becomes less noticeable. However, wind noise is a constant problem, particularly at higher speeds. 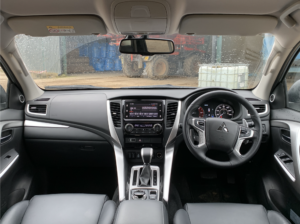 The Shogun Sport 4 borrowed by Farmers Guide is the flagship model with a high level of equipment. Visibility all around is excellent.

The Shogun Sport 4 borrowed for the test was well equipped, including auto-levelling headlamps, heated seats, adaptive cruise control and a 360-degree camera which proved helpful for manoeuvring in tight spaces. The automatic LED headlights worked well and the powerful main beam gave plenty of illumination on back-roads.

The dual-zone climate control worked well and provided good ventilation. Rear seat passengers have their own air vents allowing them to get the most from the air conditioning.

The touchscreen had plenty of functions but was quite fiddly and the display lacked clarity. However, connecting it to a smartphone and using Apple CarPlay mode produced a brighter and clearer image, and allowed route planning from the phone to be viewed on the main display.

Storage includes a large glove box and space in the front doors for a drink bottle plus smaller items. There are also handy trays in the sides of the centre console which are small but useful. There is also a large compartment in the centre console between the seats. With the second and third rows of seats folded flat there is plenty of load space. From the folded second row seats to the rear door the maximum load area is 157cm long and 128cm wide although this narrows to 102cm between the wheel arches. The rear door is 97cm wide and the loading height is 88cm.

The fuel tank holds 68 litres. Service intervals are 12,500 miles or 12 months and the standard warranty is a very generous 62,500 miles or five years. Mitsubishi has an excellent UK dealer network so obtaining back-up shouldn’t be a problem. 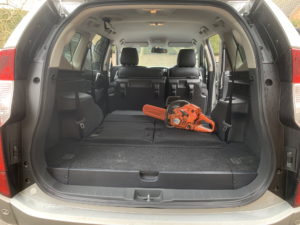 With the second and third row of seats stowed away there is plenty of boot space.

During the test week the Shogun Sport covered approximately 700 miles and its popularity grew as the week went on. It was comfortable on long journeys with a firm but forgiving ride, its off-road performance was excellent and it proved surprisingly economical. For a large vehicle it was easy to operate in tight yard areas mainly due to the excellent all-around vision, and the reassuring 360-degree camera. The Shogun Sport range starts at £27,519 for the Commercial, and the premium Shogun Sport 4 version tested is from £38,690. It’s not cheap, but its return to the UK market will be welcomed by existing Shogun users and its practicality will tempt those moving from other brands.

Cheffins to auction an exceptional collection of classic & vintage machinery

Robust storage solutions to make the most of your farm vehicle