Celebrations for sale of 100th sprayer 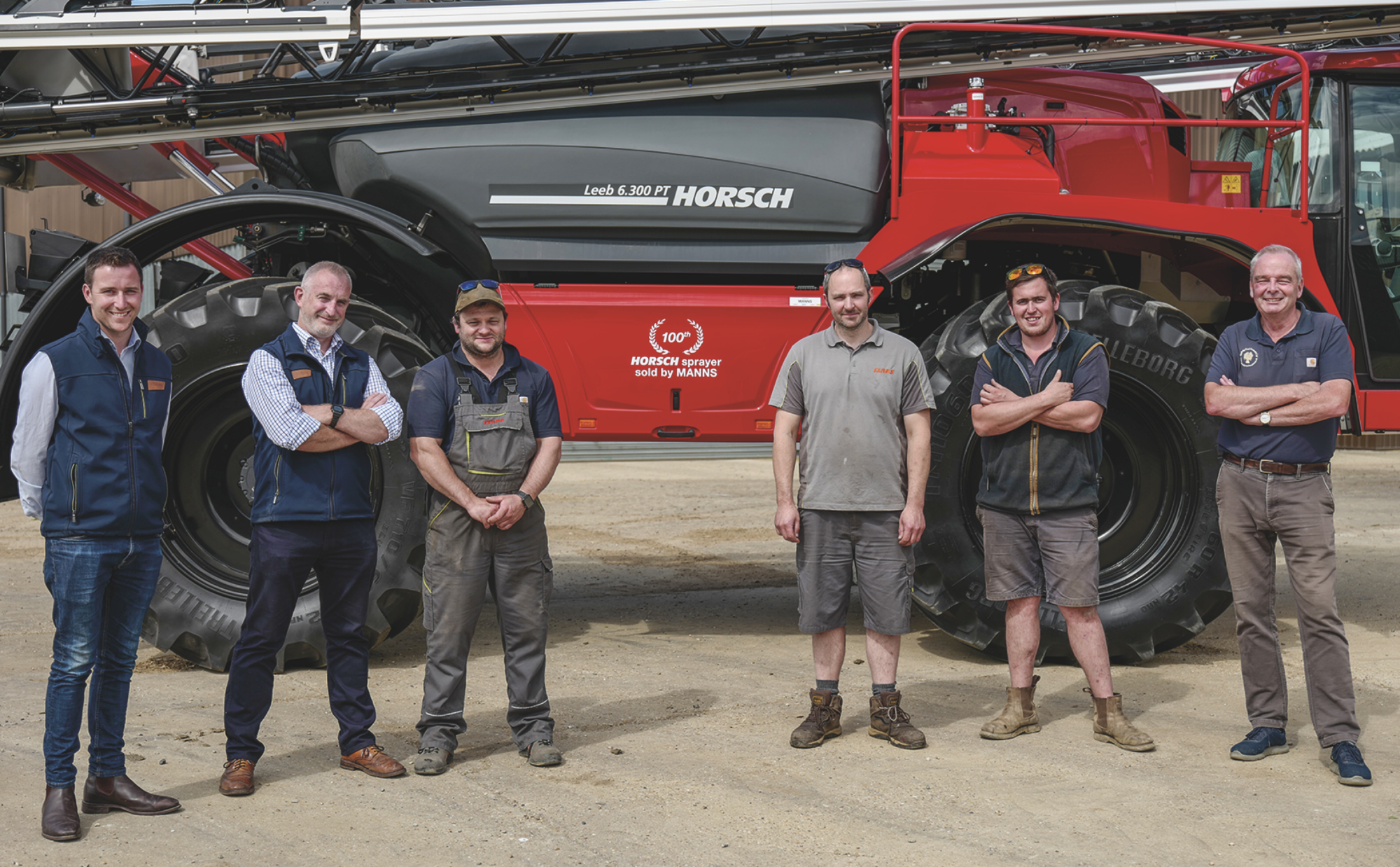 Carrying special decals identifying it as the 100th sprayer sold by the dealer, the Horsch Leeb 6.300 PT was delivered to Gawdy Hall Estates Ltd in early August. A Horsch Sprinter 6m drill was also delivered to the customer at the same time by the team at Mann’s Halesworth depot.

Gawdy Hall Estates farms approximately 800ha of ring-fenced land near Harleston in Norfolk. Some of the land is forest, sheep are grazed on parkland and there is a poultry breeding unit rented out to a local producer. Most of the land is arable cropping including winter wheat, winter barley, spring barley, oilseed rape, spring beans and forage maize. “Our typical rotation is two wheats then two barleys followed by oilseed rape or beans, or forage maize on the lighter land – but a lot depends on the black-grass situation,” explained managing director David Green.

A plough is still used when needed, although inversion tillage is avoided where possible and the policy in recent years has been to drill later in the autumn, allowing extra time between crops to tackle black-grass. A 5m Vaderstad TopDown primary cultivator is followed by a Vaderstad NZ spring-tine cultivator, or a RexiusTwin press if conditions are dry and cloddy. Until this year an 8m pneumatic drill was used, but this has been replaced by the new Horsch Sprinter for this autumn. “Our previous drill was excellent when conditions were good, but it struggled with drilling later in the autumn when soils were wetter, so we had to have something more versatile,” continued David. “With more spring cropping there is less autumn drilling so a 6m drill is adequate and it also fits in with our change to 36m tramlines.”

Features which attracted David to the Sprinter drill include its wide tine spacing allowing plenty of space for trash to flow through. “All of our straw is baled currently but we don’t know what will happen in the future and if we move to chopping rather than baling behind the combine then we know the Sprinter will cope. It can direct drill when conditions are favourable or work on ploughed or sub-soiled land, so whatever establishment techniques we change to in the next few years the drill will be suitable.

“Manns provided a demonstration establishing a crop of spring barley and we were all impressed by its performance and the build quality, and the ease of setting it up.”

Modifications to the drill by the dealer have further increased its versatility. A rear mounting platform was installed allowing an additional hopper to be carried, so seeding, fertiliser placement and slug pellet application can all be achieved in one pass. 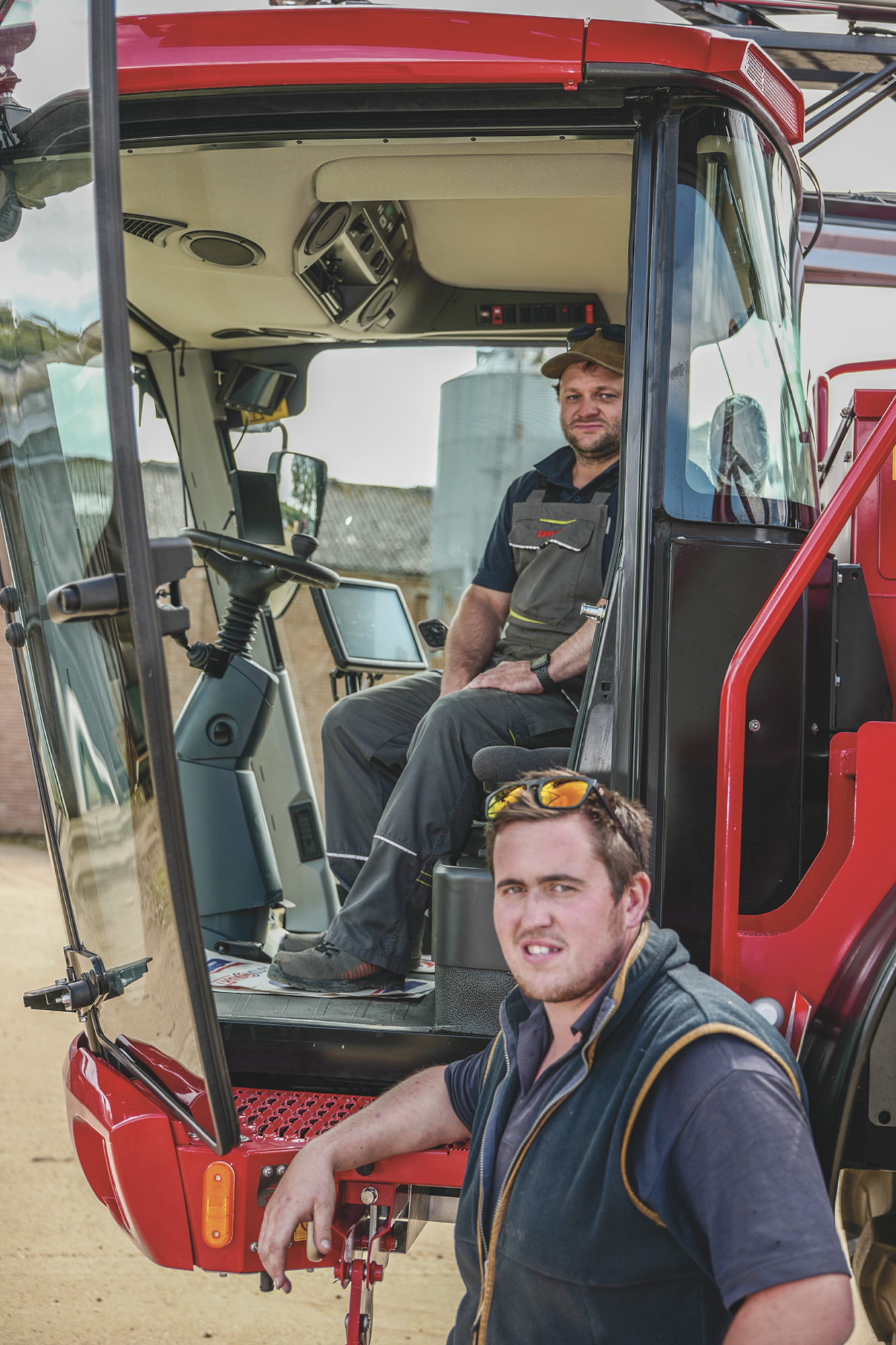 The Horsch Leeb 6.300 PT self-propelled sprayer has a 6,000-litre tank, 36m booms with Boom Control ProPlus boom height control, TopCon guidance and a 350hp engine. It replaces the farm’s previous 32m sprayer. Dan Marshall (in the seat) will be its main operator and he describes the boom performance of the demonstration machine trialled last year as ”fantastic”. George Barnby, pictured with Dan, will also operate the new sprayer.

Many brands of self-propelled sprayer have been used by the farm, but the new machine is the first Horsch. “The back-up we knew we would get from Manns was the major factor in choosing the Horsch sprayer and the drill,” continued David.

“We had three very impressive demonstrations of the Leeb 6.300 PT by Manns field sales manager Ben Marsh and the Halesworth depot team. The technology behind its design and the build quality are fantastic, and we don’t believe that any other sprayer offers better boom control and suspension. We have increased our spraying width from 32m to 36m and also changed from granular to liquid fertilisers so the new sprayer will be busy and reliability is essential as opportunities to carry out applications are often limited by weather.”

The new sprayer has Boom Control ProPlus height control, allowing boom operation down to just 40cm, and it also has 25cm nozzle spacing. “The boom suspension is fantastic and the 25cm nozzle spacing will be used to optimise coverage while applying pre-emergence chemicals,” explained the farm’s main sprayer operator Dan Marshall. “It has a TopCon control terminal which is easy to use and similar to what we have used in the past in other machines.”

Other machinery purchased from Manns in recent years includes a Claas Lexion 7700TT combine with a 35ft header, a Xerion 5000 tractor, a Claas Scorpion telehandler and two Stewart trailers. “Our first Claas product was a Scorpion handler in 2012, which was upgraded to a larger 5t model a few years ago,” said David. “We then bought the two trailers followed by the Lexion combine, although until we had a demonstration I wouldn’t have believed we would ever change from our previous brand.

“Having struggled to harvest crops at the optimum time due to adverse weather during several harvests, we tried the Claas combine three years ago. Its twin rotors achieved much higher work rates, the sample was cleaner and it used significantly less fuel. We continue to be delighted with its performance.”

The Xerion 5000 replaced a large articulated tractor used for primary cultivations. “It was on dual wheels so moving it around on the narrow lanes was always a problem, and it spent most of the year in a shed as it was only suitable for a few tasks. The Xerion 5000 is a lot more versatile and with its 900mm tyres and operating in crab steering mode, the weight is distributed over a large area to reduce compaction. It’s very flexible in terms of ballasting too, and we can add weight over the rear axle to increase traction for heavy draft work and it handles our mole plough and Rexius press with ease,” said operator George Barnby.

Manns Horsch brand manager Chris Chilvers said that taking on the Horsch franchise has proved very successful for all the depots in the dealer’s network. “We expected the whole range of products to be popular with professional users in our trading area, but we never expected to sell this number of sprayers,” he explained. “Within the first 18 months, sprayer sales were mounting up and we realised that we would have to adapt the way we handled them to ensure we could provide the back-up customers needed. Put simply – we had to look after sprayer users for 10 months of the year in the same way that we were used to looking after combine users for two months during harvest. Every depot has a fully trained Horsch specialist with a service van dedicated to Horsch machinery.”

Chris said similarities between the Horsch and Claas businesses have helped. “Both are family owned and share a similar ethos and values. The Horsch UK team is always available to assist, including out of the usual working hours and customers value that.”

David describes the back-up from Manns’ Halesworth depot and particularly the Horsch service specialist Dan Sherwood as “brilliant”. “Dan lives locally which helps, but he is always willing to provide advice and support with any of the Claas or Horsch products. When we depend so much on the reliability of machines such as our combine, drill and sprayer, good after sales support is essential, and we have that from the Manns Halesworth depot.”