Increased risk of virus yellows in beet crops this spring

With few frosts to speak of this winter, and evidence of aphid populations building over the past few years, in all likelihood there will be high levels of infestation this spring and with that an increased risk of virus yellows spreading into sugar beet crops. Dominic Kilburn writes.

With few frosts to speak of this winter, and evidence of aphid populations building over the past few years, in all likelihood there will be high levels of infestation this spring and with that an increased risk of virus yellows spreading into sugar beet crops. Dominic Kilburn writes. 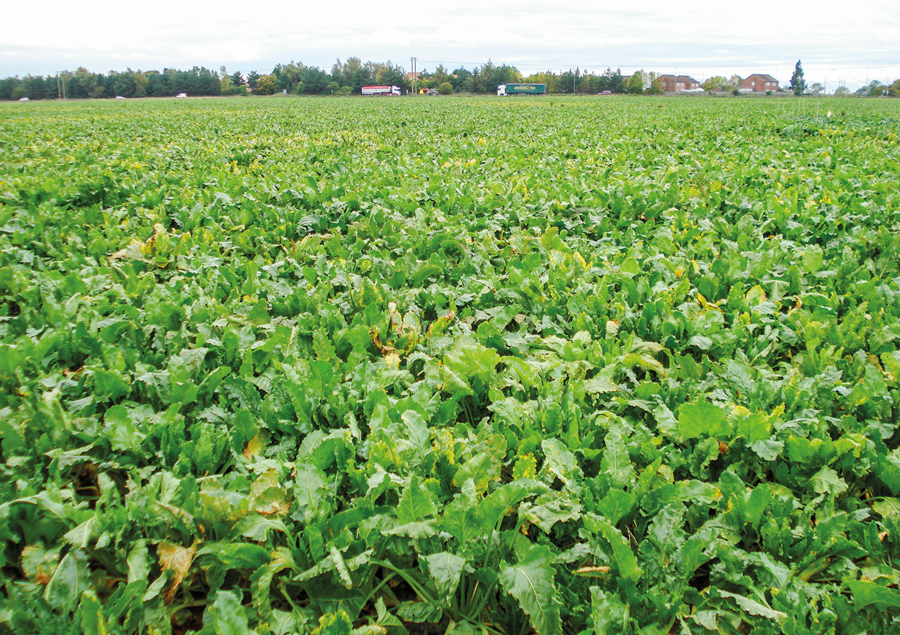 That was the main message from the BBRO’s head of science, Professor Mark Stevens speaking at BeetTech20. He said that previous insect surveys carried out by Rothamsted have shown that relatively warm conditions in January and February can mean an earlier aphid migration in the spring – straight into crops such as sugar beet. “Warmer winter weather does have an impact,” he stated. “If aphids are able to survive over winter in oilseed rape and other brassicas, as well as in catch crops and weeds, then so is the virus.

“If cleaner loader dumps are infected with virus, for example, there’s an opportunity for aphids to move through them and acquire the virus, and so managing farm hygiene is also very important,” he added.

According to Professor Stevens, the virus yellows forecast a year ago (following a similarly mild winter) predicted that between 22–54 per cent of UK sugar beet could “go yellow” without any kind of treatment to protect crops. “That was a reminder of just how bad the situation could be,” he stressed, pointing out to delegates that aphid control on farm is now anything but straightforward.

“From the mid-90s pest control in sugar beet was relatively simple; a combination of a neonicotinoid and pyrethroid seed treatment was enough to control soil and winged pests and there was little need for extra insecticides. But with the banning of neonics by the EU, and widespread aphid resistance to pyrethroids, ahead of the 2019 season was a changing point – while we still had tefluthrin for the control of soil pests, there was nothing for the control of winged pests in sugar beet.”

However, 2019 control options were boosted with the availability of one application of cereal and potato aphicide Teppeki (flonicamid) and up to two applications of Biscaya (thiacloprid) through emergency authorisation (EA) to coincide with aphid migration.

“Options for this season include Teppeki and potentially other products through an EA, but it’s worth reminding growers that resistance to pyrethroids and carbamates remains a major issue, and they often impact on beneficial insects.

“We must look after beneficial insects and so don’t be tempted to apply them,” he added.

Professor Stevens urged growers to go to the BBRO website this spring where its Aphid Survey will provide early warning of aphid flight pressure in their area from mid-April onwards.

In 2018, crop samples sent to BBRO indicated that 18 per cent of sugar beet fields were infected with virus yellows and this rose to 55 per cent of fields in 2019. “Anything you can do on farm to manage aphid levels and reduce the spread of virus yellows will be critical this season,” concluded Professor Stevens.

He said that 12 varieties were assessed in 2019, four of which were on the current Recommended List, the other eight were coded varieties from breeders, and were inoculated with either beet yellows virus (BYV) or beet mild yellowing virus (BMYV), while some remained uninoculated.

According to Dr Wright, a drone was used to measure comparisons of the virus across 140 plots throughout the season.

“All four RL varieties responded exactly the same with the traditional 30–50 per cent yield loss depending on the virus, so we’re not at the stage yet where we can say go and grow ‘variety X’ because it will give you a better response to ‘variety Y’.

“Steps are definitely moving in the right direction, and it’s really positive for the industry as a whole,” he added.

BBRO production and mechanisation lead, Stephen Aldis said that patience and timing would be key ahead of drilling this season’s beet crop following such a wet winter.

Lessons learned from the challenges of this year’s harvest had been that level seedbeds and consistent planting can really put you in good stead for the following harvest, he began.

“But growers must think flexibly as to how they are going to achieve their seedbeds this spring. Soil type will have a big impact on when and how you can operate. Treat soil type by soil type and field by field to really get the optimum out of your seedbed,” he explained. “Over cultivation is something I hear growers talk about each season and so it’s important to target those areas that you know are of concern and not everywhere.”

Mr Aldis also warned about cultivating too deep when trying to alleviate wheelings. “If you are doing tillage at depth this spring to remove wheelings then look behind you to check you are doing good, rather than making it worse,” he added.

He also asked growers to think carefully about what to do with land where wheat crops had failed from excessive water levels and which is earmarked for beet in 2021. He said that, come May time, there would be opportunity to restructure the soil, update drainage plans, apply organic material or get a cover crop established.

Moving on to seed rates, Mr Aldis said there was no evidence that over 100,000 plants/ha will achieve more yield. “As seed rate increases, your area use efficiency falls – the more seeds that are drilled, the spacing between them gets worse, producing uneven emergence and gappy establishment, and this can make it very difficult come harvest.

“In addition, there is no evidence to suggest that increased populations can help mitigate losses through virus. In fact we have the opposite opinion, that increasing plant competition results in the crop getting to the 12-leaf stage later, resulting in a detrimental effect.”

Mr Aldis said that the optimum target depth for planting seed was between 2.5 and 3cm but there is the option to go to between a 3 and 5cm depth if growers are looking for moisture.

“It’s not all about the level of moisture on the day, either. Seed planting depth also depends on the forecast as to how deep it should be. If we know there are going to be prolonged days of hot, dry weather then we should be more confident to go deeper and get better establishment.

“Going deeper can of course result in a more uneven emergence so if growers can get seed into that optimum depth, then this should provide the optimum delivery of 12-true leaves and mature plant resistance.”