A two-week-long test of one of Manitou’s latest skid-steer loaders on a large mixed farm was intended to fi nd out whether these highly manoeuvrable machines have agricultural applications beyond poultry and pig buildings. David Williams reports. 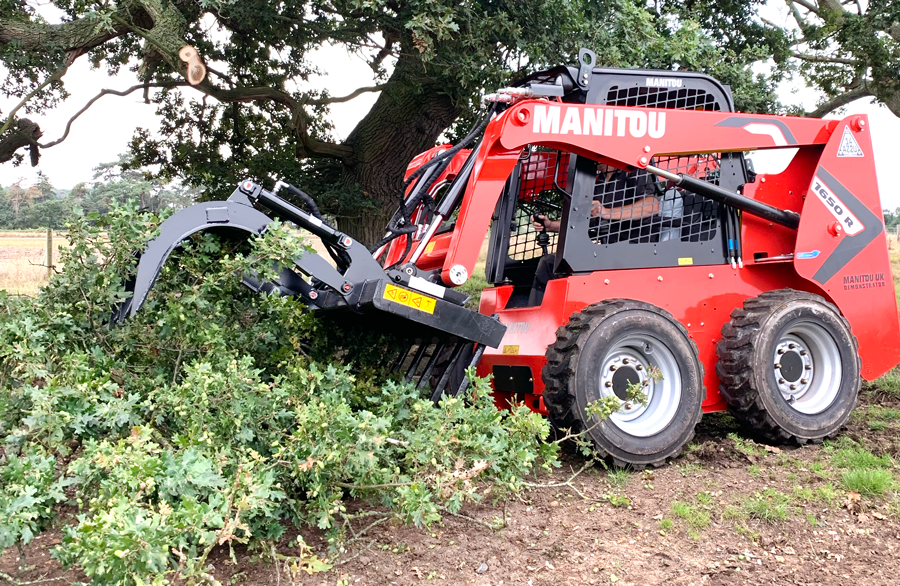 A two-week-long test of one of Manitou’s latest skid-steer loaders on a large mixed farm was intended to find out whether these highly manoeuvrable machines have agricultural applications beyond poultry and pig buildings. David Williams reports.

Manitou launched its compact loader range, which included a large selection of skid-steer models, at Lamma last year. The company has owned American manufacturers Gehl and Mustang since 2008, but offered both in their traditional colours and with existing brand names until late 2018, when the two ranges became part of the Manitou line-up with full Manitou branding.

Skid-steer loaders boast a simple design, compact size and unbeatable manoeuvrability. Manitou’s line-up includes models with traditional radial lift and vertical lift, and with tyres or tracks. Radial lift is simpler and suitable for most applications, whereas vertical lift uses a variable geometry linkage which causes the load carriage to move through a constant vertical plane. This makes it better suited for tasks such as pallet stacking, and it also keeps the load closer in to the machine for increased load capacity.

Load capacities are quoted by Manitou as 50 per cent of the machine’s static tipping load with a standard bucket. Cabs across the range meet Level 2 ROPs and FOPs standards, and before any of the machines can be used the operator has to lower a safety restraint bar to activate the hydraulics.

Options include a front door, heater, air conditioning, an air suspension seat and a radio.

The model supplied for the Farmers Guide test was the 1650R. The Manitou line-up includes wheeled models with 386–1,905kg lift capacity, and the 1650R sits just under halfway up the range with 748kg lift capacity. The version we tested was on wheels, but it is also available as a 1650RT with tracks.

The farm selected for the skid-steer loader test was Euston Farms – part of Euston Estate, which is close to the Suffolk/Norfolk border. The farm is mainly arable, with more than 2,500ha of in-hand crops including cereals, maize and sugar beet, and it also produces vegetables grown in partnership with RG Abrey Farms.

Euston relies on two conventional telehandlers for loading and materials handling, and the range of enterprises means there is always plenty of work for both machines. Some of the livestock buildings have low roofs, which restrict use of the large telehandlers, so it had been hoped that the skid-steer would be on the farm in time for mucking out after the beef cattle were moved outside in the spring. However, Covid-19 restrictions delayed the machine’s arrival until early autumn.

“Although I have operated most other types of loader quite extensively, the test machine was the first skid-steer I had used. Ahead of the test, I expected advantages to include superb manoeuvrability, but I also anticipated that it would be uncomfortable and noisy,” he explained.

Manitou offers a choice of control systems, including hand-only, hand and foot and joystick, and the demonstration machine came with foot-operated hydraulic controls, and movement and steering controlled by twin hand levers.

CONTINUE READING IN OUR ONLINE ISSUE