Make the most of early fertiliser applications 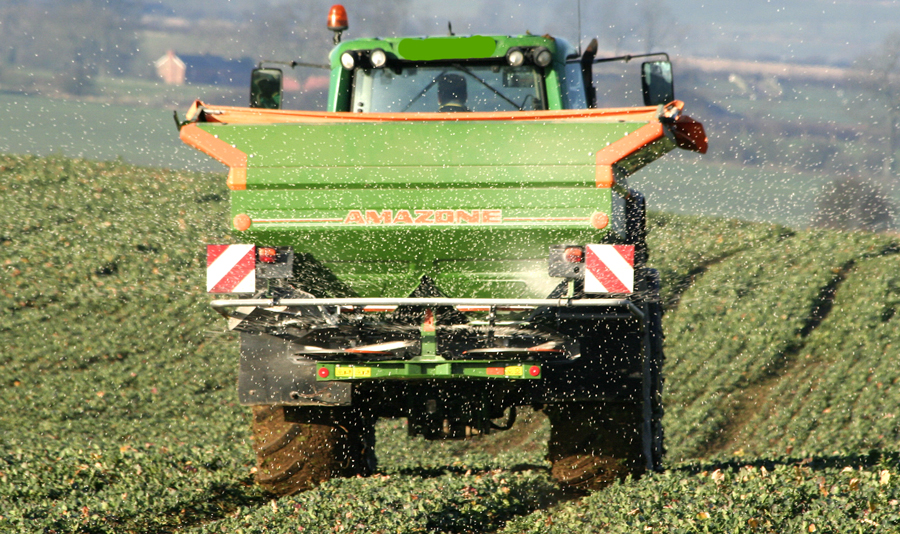 Indications are that heavy winter rainfall across much of the UK could have increased losses of some of the more soluble soil nutrients, such as nitrogen and sulphur, particularly on lighter, less nutrient retentive soils, so it is important crop requirements are fulfilled as growth increases.

“We’re still waiting for results from N-Min testing, but my feeling is that given the rain we’ve had, there will be a low reservoir of nitrogen in the soil, and with crops generally showing good potential, it will be vital to protect that from the outset,” says Yorkshire-based agronomist David Stead.

“September-sown wheat looks healthy and well tillered, while even late October and early November-drilled cereals are nicely established with two to three tillers. We need to make sure we can maintain this biomass growth and not compromise the yield potential that’s there.”

Nitrogen is the main focus for early fertiliser applications as crop requirements increase significantly as canopies develop. Although N-Min tests are best done early in the year, Mr Stead says it is not too late to get soils tested to gauge the extent of any winter losses and help inform later fertiliser applications.

He prefers a “little and often” approach to nitrogen applications, using multiple splits through the season.

“Typically, the aim is to have applied around 80-100 kg N/ha in two doses by mid-March, but you’ve got to be flexible and adapt to the individual situation. It is also very important to maximise nitrogen use efficiency to get the most from any inputs.”

Indeed, although early nutrition planning often focuses on nitrogen, Hutchinsons fertiliser manager Tim Kerr says it must not be considered in isolation.

Several other nutrients, notably phosphate, potassium and sulphur, influence how efficiently plants assimilate nitrogen. Magnesium is also important as it is fundamental to chlorophyll production and any shortfall reduces photosynthesis, which in turn reduces nitrogen uptake, he adds.

Soil testing, such as Terramap high definition soil scanning, provides a valuable insight into the nutrients available to plants, and highlights any variations within individual fields that may need addressing with more targeted measures.

“We’ve done quite a lot of Terramapping and it’s been really interesting to see how much soils can vary chemically within the same texture,” notes Mr Stead. “For example, a sandy clay loam can have very different readings for pH, phosphorus or potassium.”

Understanding this variability is essential to feed growing crops correctly through the season, and to formulate longer-term management plans for evening-out the variability, he says.

Mr Stead believes tissue testing ahead of the T0 fungicide offers a useful way of detecting any potential nutrient deficiencies in time for them to be rectified by including products with the T0 spray.

Manganese, magnesium and zinc are likely additions at this timing depending on crop requirements, he says.

Alongside tissue testing, other tools are also available to help fine tune fertiliser applications as the season progresses, such as chlorophyll analysis with Yara’s N-Sensor, or digital satellite mapping.

This season, users of Omnia have free access to satellite imagery that can help identify variations in crop growth within fields and allow accurate application plans to be formulated, says agronomist Rob Jewers.

Two types of imaging are available. One measures the red and near-infrared light reflected by vegetation to produce an NDVI (normalised difference vegetation index) map. Once uploaded to Omnia, it can be used to highlight variations in biomass growth for closer inspection, and/or used to produce a variable rate application plan.

Mr Jewers says NDVI imagery is most useful earlier in the season, as once crop growth becomes more advanced (typically beyond GS 30/31), maps can become too saturated to pick out clear differences.

That is where the second form of satellite imaging becomes more useful. This combines near-infrared band measurements to produce a relative score of the crop’s chlorophyll content to give a relative index. As with NDVI maps, Omnia converts this chlorophyll map into a variable rate application plan, or it can be used as another tool to support field walking and management decisions.

“Nitrogen fertiliser is invariably the largest single variable cost in broad acre crops, and we are at pains to produce precise nutrient management plans. For these plans to be effective, accurate application and correct timing are imperative to get the best out of the fertiliser,” says Mr Kerr.

Boron is important for grain formation in cereals, so is something to be aware of later in the season and if necessary, treat crops at the T2 timing.

“There aren’t that many fertilisers or natural sources that contain boron, so it may be a case that soil reserves have gradually been depleted over the years, particularly in rotations growing a lot of oilseed rape. It’s definitely something to be aware of as it could become more of an issue.”