Claas has announced a new Trion combine series to replace its Tucano and Avero models. David Williams attended the launch. 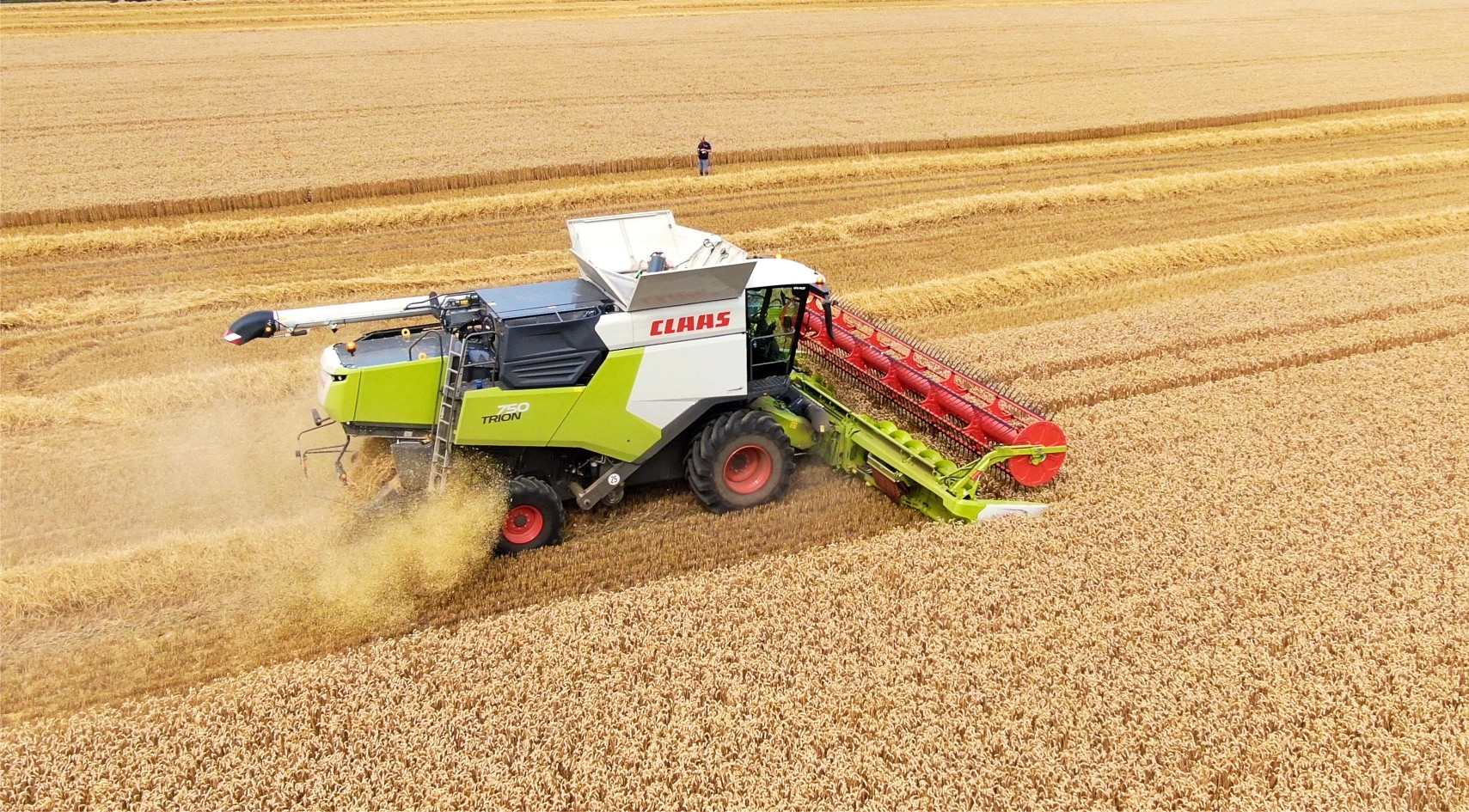 The new Trion line-up has been in development for 10 years, and includes 20 models. There are five and six straw walker conventional models as well as single- and twin-rotor hybrids, plus Montana hillside and Terra Trac versions.

The Trion replaces the popular Tucano range and smaller Avero models, although the base Avero 320 remains in the price list for next year. Top models in the Trion series fill the capacity gap between the largest Tucano and smallest Lexion models created when new 5000 and 6000-series Lexions were introduced last year.

The Trion range comes with many key features unique to Claas in combines of this size. These include a massive separation area, Jet Stream air separation across the range, new British-built Cummins engines, a brand new Claas cab, large grain tank capacities and an extensive range of chopping options. 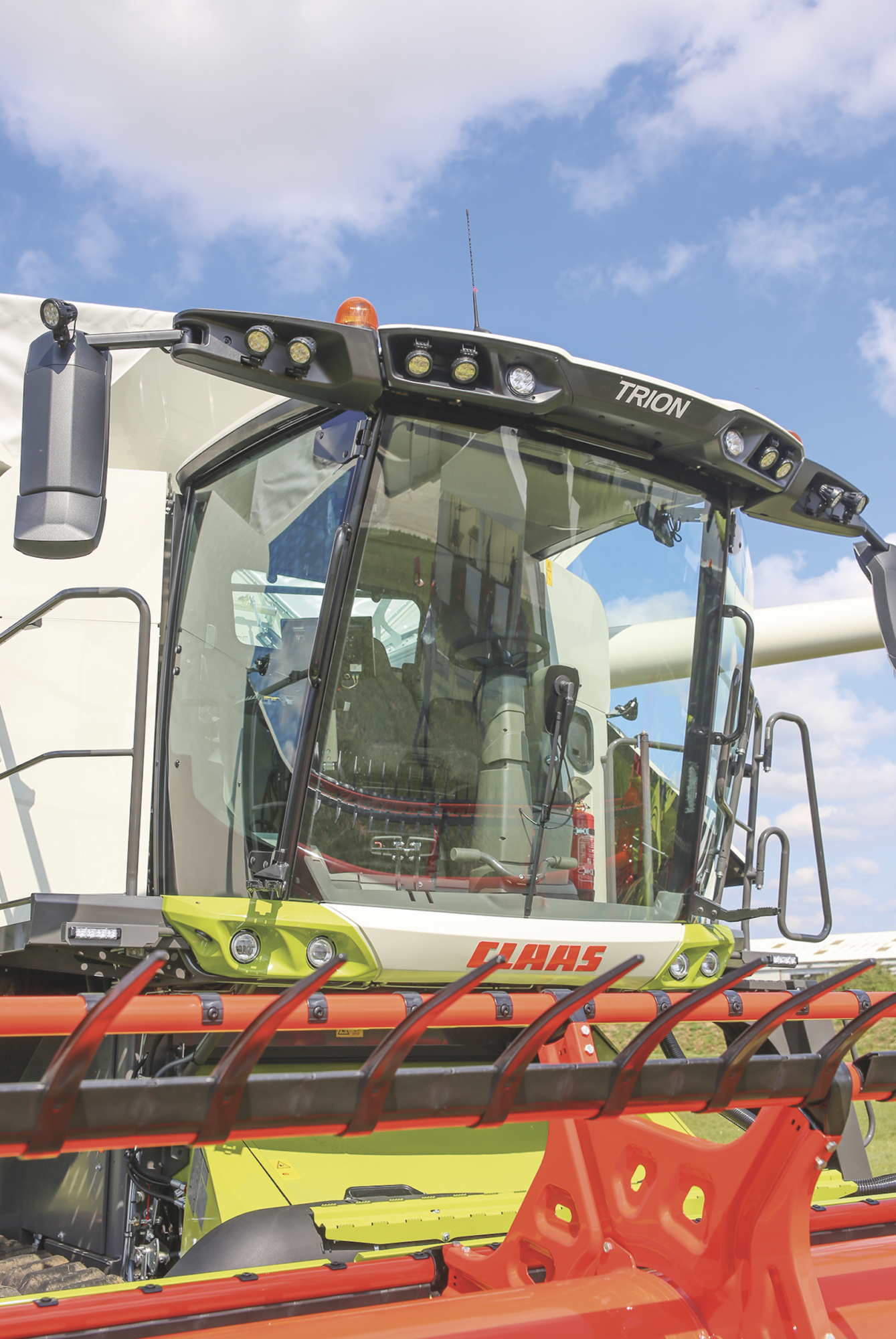 The threshing, separation and cleaning systems are all uprated, and the cab is larger and more comfortable.

The APS primary threshing system is used to thresh out up to 90 per cent of the grain, leaving just 10 per cent to be dealt with during secondary separation. Trion 500 and 700 models have a 1,420mm wide threshing area, while Trion 600 models have 1,700mm. Previous Tucano models had either 1,320mm or 1,580mm.

The APS includes a 450mm diameter accelerator, and a 600mm diameter closed threshing drum which is 33 per cent larger than the Tucano’s. This also results in a larger concave area and on Trion 600 models the increase equates to 31 per cent and on Trion 700 models the concave is nine per cent bigger than the Tucano 580’s. Another new feature is interchangeable front concaves, and the whole concave assembly adjusts as one unit. The speed of all three drums is synchronised and Cebis adjusts the entire system from the cab.

Trion 500 and 600 models have the Claas Multifinger separation system (MSS) which fluffs the straw to aid separation. Straw walker models have open walkers 4.4m long with four steps. Total separation area is 6.25m2 for Trion 500 models and 7.48m2 on Trion 600 models which Claas claims is the largest in the size class.

Trion 720 and 730 Hybrids come with a single 4.2m long, 570mm diameter rotor with six grates, while the larger Trion 750 has twin 4.2m long, 445mm diameter rotors with five grates. Claas has added its proven ‘bomb-door’ rotor flaps which adjust hydraulically to direct separated crop to the upper side of the sieves when working on slopes. Rotor speed can be infinitely adjusted through Cebis independently of the APS.

New Cummins 6.7-litre or 8.9-litre, 6-cyl engines power Trion combines, with Dynamic Power as standard which adjusts the power output to suit the load. The engines operate at 1,900rpm while harvesting, reducing to 1,650rpm for road work, and meet Stage 5 emissions standards using SCR (AdBlue), but without EGR.

Six of the Trion models are available with Terra Trac rubber tracks, or as Montana hillside versions. Like the larger Lexion models – the track units incorporate full suspension and allow a maximum 30kph travel speed. Tracked versions are just under 3.3 or 3.5m wide. Wheeled models with 800mm tyres are also under 3.5m, including the largest Trion 750, as well as Montana hillside models.

Montana versions offer lateral compensation up to 18 per cent; and longitudinal up to six per cent when Multi Contour is specified. Power Trac 4wd is an additional option. 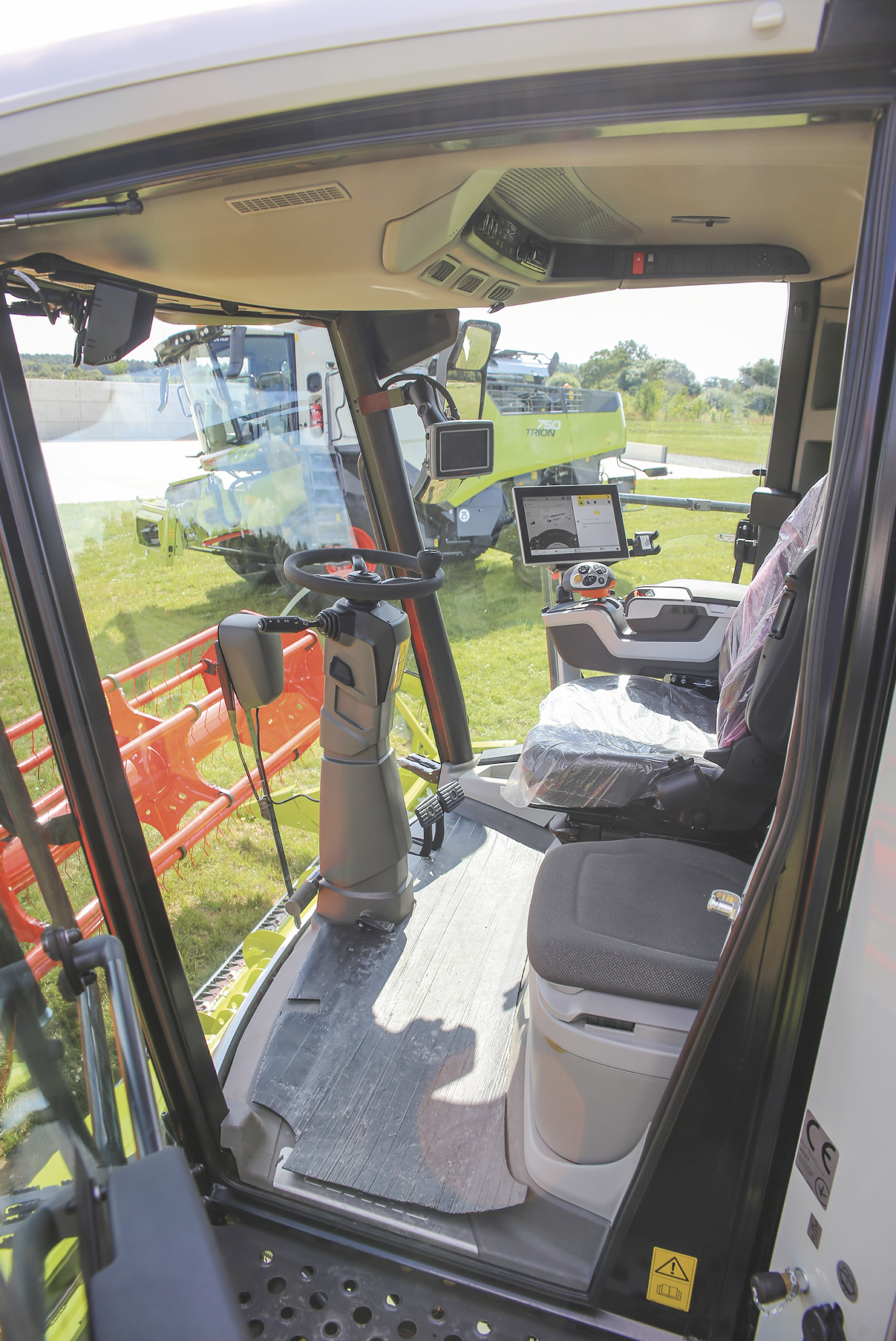 The new cab has more head and legroom, and a larger windscreen. The door is all glass and higher than before, improving the view for unloading. Other improvements include a swivelling seat, and extra functions for the Cebis 12in terminal including Cemos Dialog or Cemos Automatic when fitted.

The Trion’s new cab will feature on additional models in future. It has more head and leg room, and a larger windscreen with narrower corner pillars for a superb view of the table. The door is taller and provides a better view of the unloading auger and trailer. The seat swivels 30 degrees each way, and optional footrests are available for extra comfort.

Control is through the latest Cebis 12in touchscreenterminal,althoughthereisalsothe option to control combine functions using armrest- mounted buttons. Cemos Dialog and Cemos Automatic are controlled through the Cebis display.

Automatic steering options include Laser Pilot on the cutterbar, Field Scanner, or GPS Pilot controlled through a new Cemis 1200 terminal. The Cemis 1200 was developed by Claas but uses a receiver and steering technology developed in association with Trimble. The terminal replaces the previous S10 version and is available for all Claas combines, forage harvesters and tractors and can be specified as a factory-fitted option.

Grain tank capacity up to 12,000 litres is available for the flagship Trion 750, while the base Trion 520 has an 8,000-litre version. Unloading auger speeds start at 90 litres/second and the Trion 750 delivers 130 litres/second. The auger swings through 105 degrees bringing it into line with the cab door for a clear view while unloading.

A pivoting spout is a new option – operated through the C-Motion joystick. This controls the grain throw making it easier to compensate for side slopes and deeper trailers.

The Trion can work with the full line-up of Cerio headers, or the new Vario range of auger-type cutterbars, plus Convio and Convio Flex draper type headers in widths up to 12m.

Trion will be popular

Claas combine sales manager Adam Hayward said the Trion range is extremely versatile, and offers the performance and capacity needed by modern farms with diverse cropping. “They can be specified with a much wider range of options than the previous Tucano models, allowing buyers to spec them up to the equipment level of Lexion models, while not matching the larger combines’ output.

“In recent years, the number of rotary combines we have sold has exceeded straw walker models, but that is typical of the industry,” he continued.

“The tendency to update combines with larger models continues as customers look for extra output to maximise harvesting opportunities when the weather is favourable, but we are also seeing larger farms replacing a large combine with two smaller models for increased flexibility. The Trion fits perfectly in our line-up and fills the gap between the current Tucano and latest Lexion models. It’s a proven design and the sales teams know and understand it. The new combines are priced well too.”

For Vario 1080, Vario 1230 and Vario 1380 headers; new rapeseed knives with mechanical drive and an overload clutch have 50 per cent increased cutting force. They can be fitted or removed in seconds without using tools, and the assembly weighs 33 per cent less than before for easier handling.

New divider clamp mounts have also been introduced for easier fitting and removal.

Hydraulic height adjustment for the intake auger replaces the previous manual system, allowing fingertip control from the cab. Infinitely variable adjustment from 10mm downwards and 25mm up is available for the two-part auger at the central bearing.

The three widest Vario headers also benefit from a new reel driveline, delivering torque direct from the hydraulic motor. This makes the drive system narrower, and allows the full range of table travel adjustment to be used even when side knives are fitted. An extended maintenance interval of 500 operating hours replaces the previous 100 hours, reducing downtime.

Pressure-dependent reel height adjustment is also new, matching the reel speed to the ground speed. Hydraulic pressure in the reel drive is monitored, and if large crop volumes cause a pressure increase so that the set reel speed can’t be maintained, then the reel is lifted automatically until the required speed can be achieved again. When the operating pressure reduces then the reel is lowered again. Operating parameters are set from the Cebis screen.

Farmers urged to check insurance in case of combine fires